Corralling the Gay and Lesbian Vote 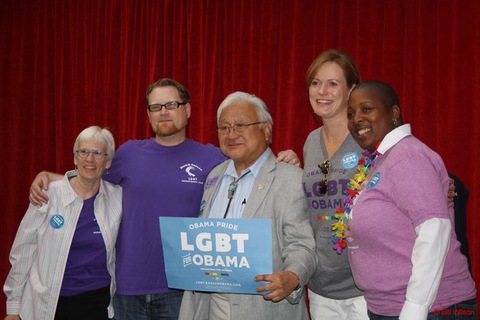 More than 30 years ago — June of 1982 to be exact — I covered a gay pride parade in San Francisco. There was a hot race for Congress going on at the time: the powerful Democratic incumbent, Phillip Burton, was running against a popular Republican state senator, Milton Marks. Both of them marched, or rode, in the parade, surrounded by dancing, motorcycle-riding members of the gay and lesbian communities.

AIDS was just becoming known, but gay political power — at least in San Francisco — was an emerging force to be reckoned with, more so than almost anywhere else in the nation. (Burton won the election.)

At that point, the main concern of gay people was violence against them. Harvey Milk had inspired the community by becoming the city’s first openly gay supervisor. His murder, along with the murder of Mayor George Moscone, inflamed and energized the gay community to more political action. Moscone’s successor as mayor, Dianne Feinstein, endorsed the gay pride parade, but always with a bit of trepidation. As with many old-line San Franciscans, the outrage of the marching throngs made her just a little uncomfortable. (She has since become used to it.)

Politicians outside of San Francisco were concerned that many voters were not sympathetic to gay rights or to gay people, and would punish politicians who were too close to that emerging community. And gay people were often reluctant to give money to political campaigns or gay political organizations, for fear they would be outed if their names were published.

Today, the situation has changed, but there’s still some hesitation.

How Important is the Gay and Lesbian Vote for the Upcoming Election?

The gay community is actively being courted by the Obama re-election campaign, especially for fundraising. The campaign has a special webpage for potential LGBT donors, as well as a campaign staff to deal directly with that community. The president endorsed same-sex marriage in May after saying earlier that his position was “evolving.” That announcement, following Vice President Joe Biden’s endorsement, brought a lot of gay donors into the fold. Fundraising among them became easier and more fruitful since many had been sitting on the fence waiting for the president to act.

The NewsHour asked to interview one of the top “bundlers,” or fundraisers, within Northern California’s LGBT community. We were told by an Obama campaign spokeswoman that we would not get cooperation and would prefer that we deal with field organizers from their “grass roots campaign.” But when we contacted a key grass roots organizer in the Bay Area, she refused.

In any case, many members of the LGBT community understand the potential downside of politicians becoming too close to them; they remember the history, past and present.

Today, half of all Americans approve, with support from 65 percent of Democrats and 57 percent of independents. But that approval isn’t consistent throughout the country. In Florida, for example, only 38 percent of those polled approve, while 48 percent disapprove. Among African Americans, 55 percent remain opposed to gay marriage. So coming out in favor, as President Obama did, has certain risks, although analysts point out that many of those who disagree with the president on this issue wouldn’t vote for him anyway.

At fundraising events in Los Angeles, primarily for LGBT donors, Mr. Obama focuses on the economy and jobs, dealing less with issues such as same-sex marriage or “Don’t Ask, Don’t Tell.”

Since gay Republicans make up a small percentage of the community, their political strength is often discounted, probably rightly. And the Republicans have not courted the gay vote as actively as the Democrats. Gay Republicans often say that without jobs and a healthy economy, issues like marriage equality don’t count for as much.

As the nation continues to debate same-sex marriage, the gay community’s political power and its influence in the campaign will remain a hot topic.

Tune in to Monday’s NewsHour for Spencer’s complete report.