Despite widespread condemnation from critics at home and abroad, Donald Trump’s poll numbers aren’t suffering. His lead has only increased since he called for a ban on Muslims entering the United States, proving that such inflammatory rhetoric resonates with many Republican primary voters and alarming party elites who now see the businessman as a serious threat to win the GOP presidential nomination.

Whether this strategy translates to a win in the Iowa caucuses on Feb. 1 — or helps propel Trump to the nomination — remains to be seen.

Trump has already emboldened his current GOP rivals to speak out more openly against Muslims, a shift that could influence the national debate for years to come.

But in the meantime, critics are starting to look beyond the 2016 presidential race to gauge the potential long-term impact that his rhetoric might have on voters’ attitudes towards Muslim Americans.

Trump has already emboldened his current GOP rivals to speak out more openly against Muslims, a shift that could influence the national debate for years to come.

“The spectrum of what can be said has been expanded considerably” thanks to Trump, said Shadi Hamid, a senior fellow at the Brookings Institution who specializes in U.S.-Islamic relations.

READ NEXT: Obama urges nation not to give in to fear

Last month, two weeks before Trump proposed his ban on Muslim travelers into the U.S., former Florida Governor Jeb Bush said that the country should only accept Christian refugees from Syria. Senator Marco Rubio of Florida raised eyebrows when he appeared to compare Islamic extremists to Nazi Germany.

Both comments stirred up controversy. But they were largely overshadowed by Trump, who has succeeded in making anti-Muslim attacks that would have been seen as extreme in past elections seem moderate and mainstream today, Hamid said.

“Now candidates like Rubio and Bush can seem more reasonable, because they’re condemning Trump, even though they’re indulging in the same sentiments generally,” Hamid said. With Trump leading the way, “people can get away with a lot more than we thought was possible. That’s one of the lessons of this electoral experience.”

Since Monday, Trump has defended his proposed ban, saying that the measure is necessary in the wake of the Islamic State’s attacks in Paris last month and the recent mass shooting in California. These events have spurred new concerns about national security and prompted President Obama to make a rare address from the Oval Office on Sunday.

“We need safety,” Trump said in a television appearance this week. “It’s not about religion. This is about safety.”

But it’s likely more than safety driving the rhetoric. Republican presidential contenders have consistently targeted Muslim Americans to mobilize support in recent elections, even without the presence of events like the San Bernardino shooting or the 9/11 terrorist attacks.

An analysis of Pew Research Center data from 2002 to 2014 shows that anti-Muslim sentiment in the U.S. has spiked temporarily in each of the past three elections, and is rising again now.

During each campaign season, respondents reported having a higher negative impression of Muslim Americans than in non-election years, and said they believed Muslims are more likely to incite violence than members of other religious groups. 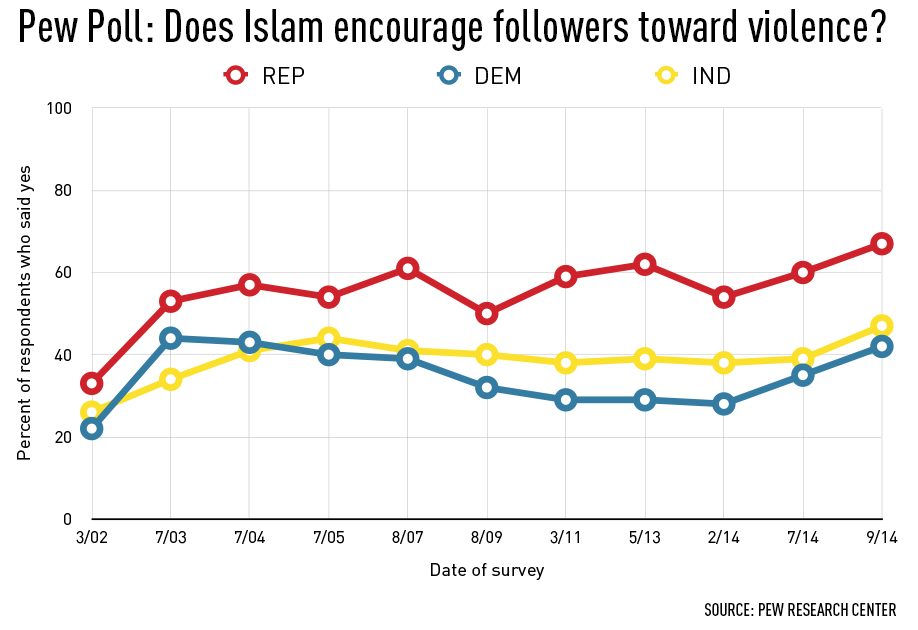 It’s unclear whether candidates drive election-year spikes in anti-Muslim sentiment, or whether they simply respond to voters’ fears. Either way, Muslims have become popular scapegoats in every election since George W. Bush became president.

The tactic appeals to a “segment of the U.S. population that doesn’t want to see more diversity,” said Angela Davis, the director the political science program at the University of Alabama. For those voters, many of whom are male, conservative, older and white, the nation’s changing demographics “represent a decline of America and American values and norms,” Davis said.

In 2012, Herman Cain said he would not appoint a Muslim to his cabinet if he became president. Former Pennsylvania Senator Rick Santorum, who won the GOP Iowa caucuses that year, said that equality was strictly a Judeo-Christian concept and didn’t exist in Islam.

“We’ve seen anti-Muslim comments from most of the Republican candidates” for several election cycles, said James Zogby, the president of the Arab American Institute. “In some ways, nobody should be surprised that Donald Trump is tapping into this vein.”

“Trump is the culmination of a poison that’s been infused into the body politic for several years,” he added.

So far, Trump’s penchant for outrageous statements has kept him ahead in the polls since he entered the race last summer, a stretch of dominance that has dwarfed the brief periods when Cain, Santorum and other long-shot candidates led the GOP field in 2012.

Few predicted that his candidacy would last long, given Trump’s scant interest in policy, as well as his willingness to make potentially damaging, off-the-cuff remarks that traditional politicians would never utter in public.

But as Trump continues his ride atop the polls, it is becoming clear that the real estate mogul has more political savvy than his opponents on both sides of the aisle have given him credit for.

“His strategy has two components to it,” said Jeff Link, a political consultant in Iowa who served as an outside adviser on Obama’s 2012 campaign. “One is, get in the news. And two is, always err on the side of acting with strength. Be the toughest, be the strongest.”

Wayne Barrett, an investigative journalist who wrote a definitive biography of Trump’s early years, said he believed Trump applied the same strategy when he proposed his ban on Muslims entering the U.S.

READ NEXT: The history of lies on the campaign trail

“It’s calculated to appeal to a certain base. He’s only trying to get a significant slice of the Republican vote,” Barrett said. “I think he looks at things from a narrow perspective, and his business now is winning Iowa.”

Whatever happens in Iowa and beyond, Trump’s heightened anti-Muslim rhetoric could leave a lasting legacy, just as past rabble-rousing candidates helped bring highly controversial views about race and other issues into the political discourse.

American historian Dan T. Carter drew a parallel between Trump and George Wallace, the longtime governor of Alabama, whose segregationist platform in the early 1960s opened the door for the Republican Party’s race-based appeals to conservative Democratic voters in the South.

“It’s not so much the policies of Donald Trump that are going to be adopted — I don’t even know what they are,” said Carter, the author of “The Politics of Rage: George Wallace, the Origins of the New Conservatism and the Transformation of American Politics.”

“Trump can, in effect, do what Wallace did in the 1960s, and that is turn American politics in a direction that is harmful in the long run,” Carter said.