The nation’s first Hispanic president? Why no one’s talking about that

In 2013, a Pew survey asked Latino-Americans the following question: “Who is the country’s most important Hispanic leader?” The top answer, at 62 percent, was “don’t know,” followed by “no one.”

Two years later, Republican Senators Ted Cruz and Marco Rubio both have a legitimate shot at becoming the nation’s first Hispanic presidential nominee. And yet their ethnicity has received far less attention than Barack Obama’s race did when he ran for president eight years ago.

What’s different about identity politics this time around?

Like candidate Obama, both freshman senators have been reluctant to speak directly about their Latino backgrounds on the campaign trail. Both Cruz and Rubio have spoken at length about their parents’ immigrant stories, but they have not stressed their ethnic heritage. The Republican Party’s internal debate over immigration has also made it extremely difficult for Rubio and Cruz, who are both Cuban-American, but have taken different approaches to their Latino identity, to build a political narrative around their status as trailblazing candidates.

READ NEXT: What everyone’s getting wrong about the president’s No. 1 job

But the contrast between this election and 2008 is also based on important differences between the black and Latino electorates, as well as changes in voter attitudes about race and identity.

“We’re in a somewhat different environment. In 2008, there was a lot of optimism about potentially electing the nation’s first black president or female president,” said Mark Hugo Lopez, the director of Hispanic research at the Pew Research Center. “Now, I don’t quite pick up the same sense of interest” about a potential Hispanic president, Lopez added.

Things could change this summer if Cruz or Rubio wins the GOP nomination. Another Republican contender, former Florida Governor Jeb Bush — who is married to a Mexican woman, speaks Spanish and has deep ties to Miami’s Cuban American community — could also reignite a conversation about Latinos in politics if he makes it to the general election.

At this point in the 2008 cycle, however, there was already significant buzz around the historic nature of Obama and Hillary Clinton’s candidacies.

“It’s pretty remarkable” that so few non-Hispanic voters and pundits are focused on Cruz and Rubio’s ethnicity, said former Senator Mel Martinez of Florida, who is supporting Bush in 2016. That aspect of the election, Martinez said, “has been very understated.”

In interviews, Martinez and other prominent Hispanic leaders acknowledged that the Republican Party’s platform complicates the picture for Cruz and Rubio, who are battling Donald Trump to win over conservative primary voters. The party opposes many policies that a majority of Latino voters support, such as the Obama administration’s healthcare law, raising the federal minimum wage, and creating a legal status or pathway to citizenship for undocumented immigrants.

The Republican Party’s platform on immigration and other issues complicates the picture for Cruz and Rubio, who are battling Donald Trump to win over primary voters.

Immigration poses a unique challenge for Rubio and Cruz. Rubio supported a Senate bill in 2013 that would have provided undocumented workers with a route toward becoming U.S. citizens. But he has since backed away from the proposal after coming under attack from Cruz and others on the right. Rubio now argues that the country must secure its borders first before moving forward with comprehensive immigration reform.

Cruz is a staunch opponent of granting illegal immigrants a pathway toward citizenship, and has turned his opposition to “amnesty” into a rallying cry for conservative voters — a strategy that has alienated many Hispanic voters.

In contrast, when Obama ran in 2008 , his party’s core message was not at odds with the views of most African American voters.

And unlike the 2016 race, that election wasn’t dominated by a specific domestic policy debate rooted in questions about race or ethnicity. The contest hinged on George W. Bush’s foreign policy and handling of the budding financial crisis, allowing Obama to avoid the pitfalls that Cruz and Rubio face today.

“Obama did not have as thorny of an issue to deal with [as immigration],” said Javier Palomarez, the president of the United States Hispanic Chamber of Commerce.

Obama wound up winning approximately 95 percent of the black vote in 2008, reinforcing an alliance between the Democratic Party and African Americans that dates back to the New Deal era. (In 2004, John Kerry won 88 percent of the black vote, a figure in line with the average for Democratic nominees in presidential elections since 1976, according to a study by Cornell University).

Latino voters are more divided along political and cultural lines, and experts agree there is virtually no chance that Cruz or Rubio could duplicate Obama’s commanding results with Hispanic voters — 67 percent in 2008 and 71 percent in 2012 — in next year’s election. A Rubio campaign spokesperson declined to comment for this story. An adviser to Cruz did not respond to requests for comment. 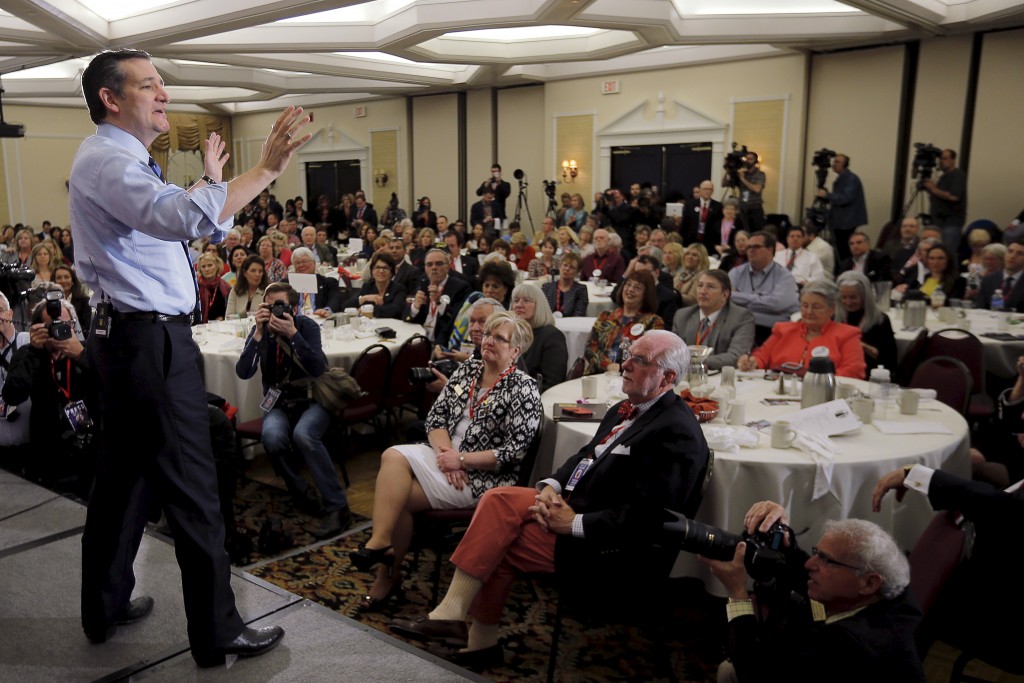 Senator Ted Cruz speaking at an event in New Hampshire in April. Cruz has not made his ethnicity a central part of his political identity. Photo by Brian Snyder/REUTERS.

Mitt Romney only won 27 percent of the Latino vote in 2012. Republican strategists believe the next GOP nominee needs around 40 percent of the Hispanic vote to win the race, but even that goal might be out of reach for any of the party’s candidates, including Cruz and Rubio.

The party may be able to attract more Hispanic voters over time, said Timothy Hagle, a political science professor at the University of Iowa.

“But I don’t see it happening in the next few election cycles,” Hagle said. “We’re certainly not going to see the kind of overwhelming support for” a Hispanic candidate that Obama received in 2008.

This reality helps explain why Cruz and Rubio’s ethnicity has not attracted the same degree of attention as Obama’s race and multicultural upbringing did when he ran for president. And there are other factors that have little to do with the candidates.

According to census data, the five largest Hispanic groups in the U.S. — Mexicans, Puerto Ricans, Cubans, Salvadorans and Dominicans — make up 84 percent of the overall Hispanic population.

But members of those groups, and immigrants from other Central and South American countries, do not have a shared past that makes it possible to lump them into a single cultural category.

The first large wave of Cuban migration to America took place after World War II. Mexicans have been moving across the southwestern border for more than a century, while many people from Central America fled to the U.S. in the 1980s to escape the violent conflicts engulfing the region during that decade.

A 2012 Pew survey found that just 29 percent of Hispanics in the U.S. believe they share a common culture with one another. When Hispanics were asked to describe how they identify themselves in a separate study, 54 percent used the name of their country of origin. Only 20 percent identified themselves first as Hispanic or Latino.

“It would be very, very dangerous [for any candidate] to assume that the Hispanic vote is monolithic,” Palomarez said.

Cruz and Rubio, who were both born in 1970, embody many of these differences.

Rubio grew up in a Spanish-speaking home in Miami, the son of working-class Cuban immigrants who left the island before Fidel Castro took power. Cruz was raised by an American mother and a Cuban father in a household in Houston that was centered around religion, not ethnicity. Unlike Rubio, Cruz has never identified closely with his Hispanic background or made much of an effort to court Hispanic voters, according to people who have followed both men’s careers.

“He wasn’t steeped in the culture. He’s half-Cuban, and he happens to have a Cuban name, but it’s not a natural, organic theme for him to talk about,” said Lisa Navarrete, a spokesperson for the National Council of La Raza, a Latino advocacy group. “It’s almost a non-factor for Cruz.”

The Hispanic populations of southern Florida and Texas also have different priorities, mirroring a larger trend around the country.

“There’s no unifying message [to] rally around, and it’s extraordinarily frustrating.”

In the Miami area, the Hispanic population is significantly Cuban, more concerned with U.S.-Cuba relations, and worried less about immigration. In Texas and across the Southwest, where the Latino population is predominantly Mexican, immigration is a key issue for Hispanic voters, said Juliet Stipeche, a former member of Houston’s board of education. But healthcare, education and the economy matter, too.

“There’s no unifying message [to] rally around, and it’s extraordinarily frustrating. You see that playing out on the national level,” said Stipeche, whose mother is Mexican and father is Argentine.

“What is the Latino philosophy?” Stipeche added. “What is our footprint and our future in the United States? It’s something that we have to get together as a community and figure out.”

Until that happens, capturing the attention of Hispanic voters may be too difficult for any one politician.

“For one leader to appeal to all these different Latino communities may be a big challenge,” said Lopez, of the Pew Research Center. “Whether or not someone is able to do that remains to be seen.”

Judging by the 2013 Pew study, which asked Latinos to name the nation’s top Hispanic leader, finding that person won’t be easy. Supreme Court Justice Sonia Sotomayor and Rubio finished in a distant tie for third place — after “I don’t know” and “no one” — with 5 percent of the vote. Cruz did not make the list.

Left: Senator Marco Rubio has a shot at becoming the first Hispanic presidential nominee, but his ethnicity has not been a focus in the 2016 election. Photo by Joe Raedle/Getty Images)