Men and women continue to be deeply divided on President Donald Trump’s job performance in the final weeks of the 2018 midterms, according to the latest national survey from the PBS NewsHour, NPR and Marist — a gap that could influence key races widely seen as a referendum on the president.

Fifty-three percent of Americans disapprove of Trump’s job performance, a number that hasn’t changed much since he took office, according to the new poll released Friday. Thirty-nine percent of U.S. adults said they approved of what the president has done since entering the White House; another 8 percent said they were unsure.

The gap in men and women’s views of Trump is in the double-digits.

That’s especially true among suburban women, said Lee Miringoff, the director for the Marist Institute for Public Opinion — a demographic that could flip control of Congress in a year when a record number of women are also running for office.

In a recent poll conducted by the Associated Press and the NORC Center for Public Affairs Research, about 80 percent of Americans think the nation is deeply divided on values, and nearly 40 percent think “things will get worse.” In the Newshour-NPR-Marist poll, 76 percent of the registered voters surveyed said this year’s election was very important. The vast majority of Democrats (83 percent) and Republicans (80 percent) indicated they were motivated to get to the ballot box, and two-thirds of voters who identify as politically independent also said they were energized this cycle.

Midterm turnout is typically lower than turnout in presidential election years. The same is true for voter enthusiasm overall in midterm elections, according to Marist polling results. For instance, in October 2010, the first midterms of Barack Obama’s presidency and also the first to follow the divisive debate and passage of the Affordable Care Act, 40 percent of registered voters said they were very enthusiastic about the midterm elections.

In 2010, 49 percent of Republican voters said they were “very enthusiastic” about the midterm elections, along with 35 percent of Democrats and 38 percent of independent voters — significantly lower than the reported enthusiasm level this year.

This year, on the other hand, “could be the highest midterm turnout in a century,” Miringoff said.

It’s unclear what role Trump will play in driving turnout. When asked if Trump influenced their decision to go to the polls this year, registered voters were split: 44 percent said he played a major role, another 23 percent said he was a minor influence and 31 percent said Trump had nothing to do with whether they would vote. 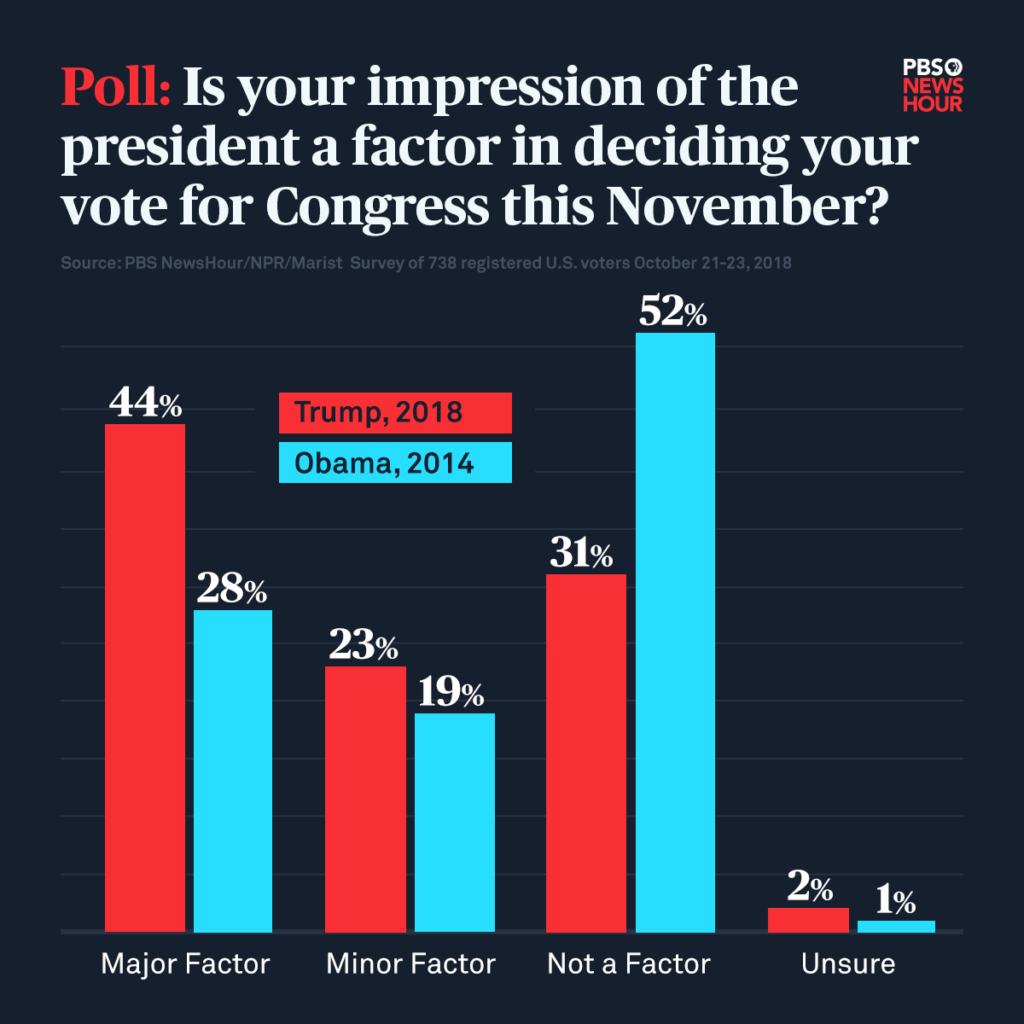 Still, the proportion of registered voters who said the current president loomed large in their decision to vote is significantly higher than it was in September 2014, during the last midterm cycle. At the time, just 28 percent of registered voters said Obama drove them to the polls; 52 percent said Obama was not a factor at all.

When asked about policy issues in the latest poll, 20 percent of registered voters said the economy and jobs were most important to them, while 17 percent of voters said health care was their top priority. Another 17 percent named immigration, and 9 percent said federal taxes and spending were their top issues this election season.

Left: A supporter holds up a sign as U.S. President Donald Trump speaks during a rally at the Nashville Municipal Auditorium, May 29, 2018 in Nashville, Tennessee. Photo by Drew Angerer/Getty Images

What suburban women want from this year’s midterms