What the #$@! Democrats are swearing more. Here’s why

“If we’re not helping people,” Gillibrand told an audience at a New York University forum, “we should go the f**k home.”

In the aftermath of Mr. Trump’s victory in the 2016 election, a growing number of Democrats have begun cursing in public, using language that in the past was reserved for private conversations away from voters and the media.

The trend isn’t entirely unprecedented, of course. In 2010, then-Vice President Joe Biden famously let an expletive slip during the White House signing ceremony for the Affordable Care Act. But the rise in examples of public cursing from Gillibrand, Perez, Sen. Kamala Harris, D-Calif., and other Democrats marks a sharp departure from the usual language used by politicians on the left in recent decades.

The shift seems to be a reaction, at least in part, to Trump’s crass tone as a candidate, which may have paved the way for a new age of political incorrectness. Whatever the reason, the rhetoric of Democrats in the Trump era, including that of rumored 2020 hopefuls like Gillibrand and Harris, is a break from former President Barack Obama’s professorial language and Hillary Clinton’s focus group-tested remarks, representing instead a tone that’s angrier — and perhaps more authentic.

The political atmosphere has changed since “the anomaly of Donald Trump swearing and getting away with it,” Indiana University English professor Michael Adams said.

“Swearing has been in public spaces over the past few decades,” Adams added. Until recently, “in political discourse, people thought you needed dignity, and some voters would object to profanity.”

That changed during the 2016 election, when Trump used crass and politically incorrect language to send a signal to voters that he was an outsider figure, said Jennifer Mercieca, a communications professor at Texas A&M University.

“His whole argument as a candidate was that he wasn’t corrupt, and he knew he wasn’t corrupt, because he used politically incorrect language” as one way to differentiate himself from establishment politicians who followed traditional political norms, Mercieca said.

Trump may have been onto something. His language on the campaign trail — and its positive reception by supporters — fits neatly into the well-known sociolinguistic theory of “overt” and “covert” prestige.

The theory holds that individuals use standard, widely accepted language to gain recognition and status — or “overt” prestige, in linguistics jargon — with a wide group of people. In a field like politics, that means using politically correct language that appeals to the broadest swath of voters and offends the fewest — and that’s what traditional politicians do.

On the other hand, individuals seeking “covert” prestige with a smaller, specific group of people use language geared toward that audience — language that might offend society at large. Politicians often seek covert prestige by using “local political dialect” to appeal to certain voters, Adams said.

“Bill Clinton could speak in a fairly statesperson-like way, but [when] he was talking to people in a small town in Louisiana, he would talk like those people,” Adams said. 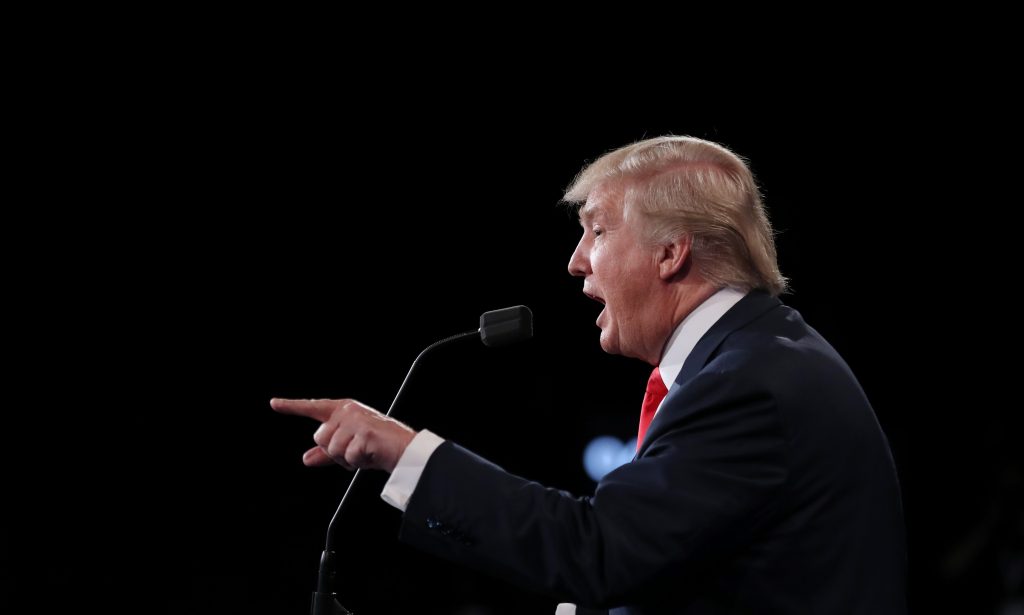 During his presidential campaign, Trump stood out in a crowded Republican field by working profanity into his speeches.

In a November 2015 speech in Iowa, Trump called the press “scum” and “garbage,” and announced his plans to “bomb the s**t out of ISIS.”

In a speech leading up to New Hampshire’s Republican primary, Trump said companies that move overseas for lower tax rates “can go f**k themselves.” In the same speech, he attempted to draw a contrast between Obama’s work ethic and his own, saying that as president he’d abstain from golfing and instead“stay in the White House and work [his] a** off.”

Trump’s primary opponents adopted his tone and coarser language in their stump speeches and press interviews in a futile attempt to catch up to him in the polls. Sen. Rand Paul, R-Ky., said the idea of increasing phone surveillance after a 2015 Paris terrorist attack was “bulls**t.” During an MSNBC “Morning Joe” appearance before he bowed out of the race, Sen. Lindsey Graham, R-S.C., called Trump “crazy as hell.”

Since taking office, Trump has yet to curse in public, though he has often taken to Twitter to air his grievances. Nevertheless, longtime political observers said Trump’s language was part of a broader cultural shift.

There’s a long history of presidents using crude language, but it was mostly done in private.

“Trump follows a long line of coarsening in culture in general, whether in music or comedy or movies,” said Floyd Ciruli, a Colorado-based pollster. “I didn’t expect it to jump into politics, especially at the highest level.”

There’s a long history of presidents using crude language, but it was mostly done in private. President Richard Nixon was captured swearing often on tape in the Oval Office, but he assumed the conversations wouldn’t be made public. President Lyndon Johnson had choice words for his advisors — and tailors — but they rarely made their way out of the White House.

“Being polite was the default of politicians,” Chris Hayden, the director of communications for the liberal Center for American Progress, said. “Our president has completely thrown that out the window.”

As a result, Democrats now feel more comfortable getting looser with their language since there “aren’t severe ramifications for the totally out-of-bound things [Trump] has said,” Hayden added.

Hayden said the change could be good for the party because voters like it when “politicians can talk like normal people.” “It demystifies that Washington politician,” Hayden said.

With Democrats in the minority in Congress, “I think there’s a general sense that you have to show passion, resistance to all of these issues” that liberals oppose, Ciruli said. “Making the language basic and more profane demonstrates that.” 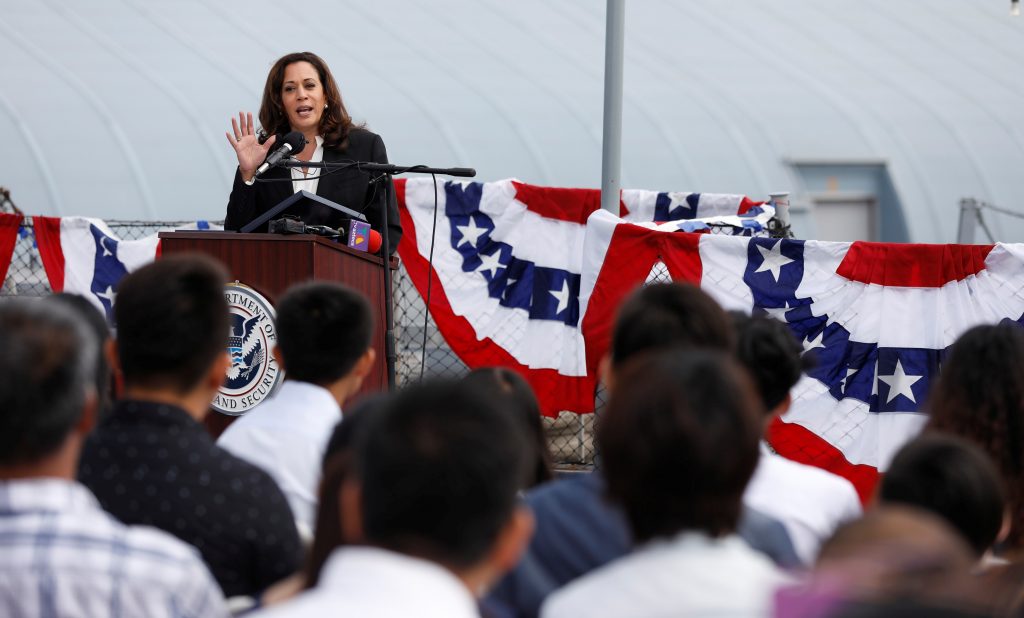 Senator Kamala Harris, D-Calif., at a ceremony in Los Angeles on July 3, 2017. Harris and other Democrats have grabbed headlines by dropping curse words in public in recent months. Photo by REUTERS/Mario Anzuoni

In May, during a guest appearance on the popular podcast “Pod Save America,” Harris grabbed headlines by offering an unusually candid response for a U.S. senator to Rep. Raul Labrador’s, R-Idaho, claim that “nobody dies because they don’t have access to health care.”

“What the f**k is that?” Harris said. Her reaction to the House health care bill was not an anomaly. The New York Times reported that the freshman senator is no stranger to curse words.

But Mercieca warns that Democrats need to be careful when using crude language. It can work when trained at unpopular legislation, but can backfire if it’s used to disparage other politicians, she said.

There are plenty of recent examples of lawmakers’ profane comments misfiring.

On the Senate floor in 2004, then-Vice President Dick Cheney told Sen. Patrick Leahy D-Vt., to go “f**k yourself,” a comment that did not sit well with Senate Democrats.

While speaking at an event in New Orleans last weekend, Rep. Maxine Waters, D-Calif., ripped into Housing and Urban Development Secretary Ben Carson’s credentials to run the department. Waters said she planned to “take his ass apart” when Carson testified before the House Committee on Financial Services, where she is the ranking Democrat.

The comment drew heavy criticism from conservatives, suggesting that coarse language by lawmakers may rally their party’s base, but doesn’t necessarily boost bipartisanship.

Democrats will need to figure out the right balance between laying down a well-placed curse word to prove a political point, and coming across as just plain vulgar.

“The public does not want this type of political correctness where politicians talk out of two sides of their mouths,” Lukensmeyer said. “But also, they aren’t ready for politicians to use swear words or degraded language about other groups of people.”

Polling bears this out. According to a recent NPR/PBS NewsHour/Marist survey, seven in 10 Americans think civility in Washington has gotten worse since Trump was elected. A January poll by the public relations firm Weber-Shandwick found that nearly eight in 10 Americans believed the 2016 election was uncivil. In the same poll, a majority of Trump and Clinton voters — 72 percent and 81 percent, respectively — said that “incivility has risen to crisis levels.”

“[There is] absolutely no question political discourse and everyday discourse has been profoundly degraded,” Lukensmeyer said.

What that means for Democrats who are cursing more frequently remains to be seen, said Hayden of the Center for American Progress. Voters will respond to politicians who show more visceral anger, but Democrats will need to figure out the right balance between laying down a well-placed curse word to prove a political point, and coming across as just plain vulgar.

“That’s the line that we draw,” he said. The question is, are Americans “smart enough to make the distinction.”

Left: Democratic National Committee Chairman Tom Perez at a rally outside the White House on May 10, 2017. Perez has sworn frequently in public speeches since taking over the DNC earlier this year. Photo by REUTERS/Jonathan Ernst