Despite NRA’s hard line on guns, some conservatives are rethinking the issue

OXON HILL, Md. — NRA chief Wayne LaPierre opened the Conservative Political Action Conference on Thursday with an attack on efforts to pass new gun regulations in the wake of last week’s mass shooting in Parkland, Florida. But throughout the day, rank-and-file conservative activists at the annual gathering said they were open to certain stricter gun control measures — a marked contrast that highlighted the subtle divide on the right on the issue of gun violence.

In his speech, LaPierre, the CEO of the National Rifle Association, accused “opportunists” of using the shooting at Marjory Stoneman Douglas High School, which killed 17 people, to “exploit tragedy for political gain.”

Lawmakers should do a better job of enforcing existing gun control laws that prevent criminals and people with mental health issues from obtaining guns, LaPierre said, instead of attempting to pass new laws that place more restrictions on lawful gun ownership.

“We all have to be careful that this doesn’t become a runaway train,” LaPierre said. If Congress takes steps to restrict some gun rights, “then it’s just a short hop to the systematic destruction of our most basic freedoms in this country.”

Republicans have for years relied on that slippery slope argument — that new gun regulations would open the door to greater regulations and eventually lead to a full repeal of the Second Amendment — to block efforts to strengthen the nation’s gun laws.

Many conservatives at CPAC said it may be time to take a slightly more moderate approach.

But many conservatives at CPAC said it may be time to take a slightly more moderate approach, something closer to the reforms President Donald Trump has suggested in recent days.

The White House said that it is open to the idea of setting an age limit for the purchase of some assault weapons. Trump also ordered the Department of Justice to block bump stocks, the device used by the shooter in last year’s deadly attack on an outdoor concert in Las Vegas, though the Bureau of Alcohol, Tobacco, Firearms and Explosives said Thursday it wasn’t sure whether it could enact that order without Congress.

“President Trump has offered a step in the right direction by offering Democrats a compromise on bump stocks,” said David Buzzard, an Army veteran and college student from North Carolina who attended CPAC. “Certain common sense restrictions need to be put in place to show that we are doing our part to compromise.” 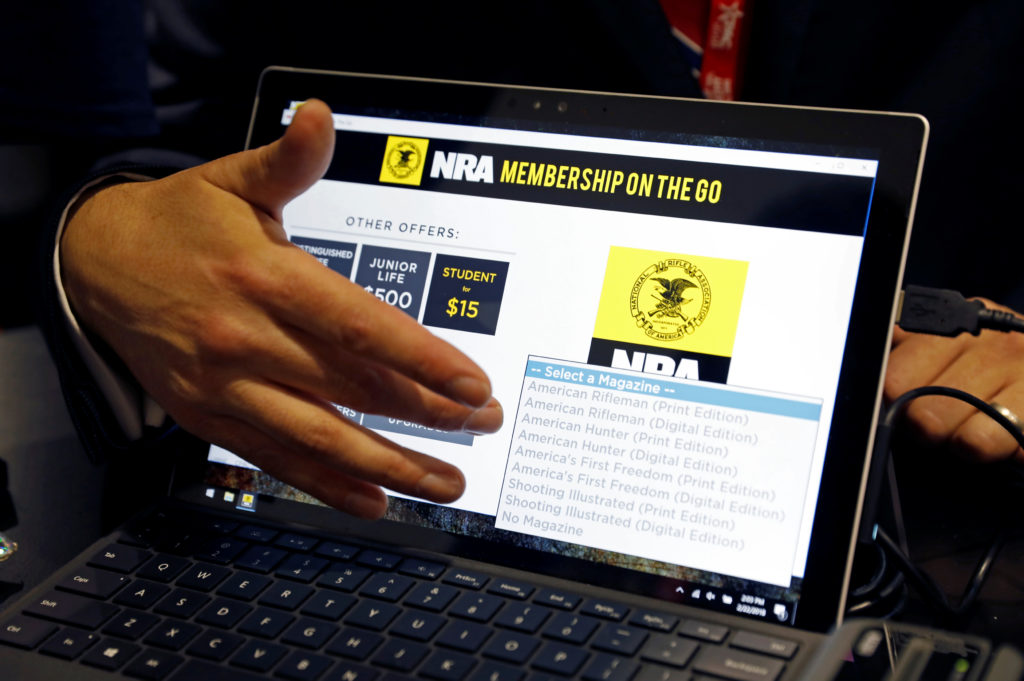 Attendees sign up for NRA memberships at the Conservative Political Action Conference at National Harbor, Maryland, on Feb. 22, 2018. Photo by REUTERS/Kevin Lamarque

Richard Kuzman, an NRA member from New Hope, Pennsylvania and a self-described “avid shooter,” said there was widespread support in his circle of gun enthusiast friends for a stricter background check system.

“There might be a very slight shift going on from the slippery slope philosophy” that LaPierre and Republicans have espoused for years, Kuzman said. “We can’t have what happened in Florida,” he added. “We’ve seen that the system is broken.”

Terre Kroeger, a Republican and NRA member from Maumee, Ohio, said she supported raising the federal age limit for gun purchases to 20 from 18 years old. The age limit for buying assault weapons should be 25, she said.

Still, Kroeger and other CPAC attendees said Thursday that they remained deeply opposed to broad gun control measures, especially any regulations that could be interpreted as taking away law-abiding Americans’ constitutional right to bear arms.

“I’m kind of confused about the Republican Party. There’s the old party, the new one, and the Trump one.”

There was also disagreement on certain proposals discussed this week in listening sessions Trump hosted at the White House with survivors of the Parkland shooting and other gun violence victims. Many also said they supported Trump’s willingness to consider allowing teachers with firearm experience to carry guns in the classroom in order to protect themselves and students during shootings, an idea rejected by Democrats and gun control advocates. And some conservatives echoed LaPierre’s position, saying they did not believe that lawmakers should create any new gun regulations.

“The only thing you can do to get rid of gun violence is a full ban on guns,” said Michael Hoxie, a senior at North Carolina State University. But that would mean “the end of the Second Amendment,” Hoxie said, something he could never support.

The conflicted views on gun regulations on the right reflect a broader divide within the party, said Kroeger, making it difficult to predict how the Republican-controlled Congress and Trump might handle the issue if they decide to act.

“I’m kind of confused about the Republican Party,” Kroeger said. “There’s the old party, the new one, and the Trump one.”

As a candidate Trump vowed to protect the Second Amendment. But it was never a top priority, and as president Trump has shown a willingness to support policies, such as offering a pathway to citizenship for young, undocumented immigrants, that buck Republican Party orthodoxy.

That could work in Trump’s favor on gun control, said Ellen Paul, a Republican from Rockville, Md. “Trump breaks all the molds. He can bring people to the table and discuss ideas,” Paul said. “No matter where you are on the political spectrum, we need to talk about this.”