Before speaking Monday to the most powerful pro-Israel lobby in the country, the American Israel Public Affairs Committee (or AIPAC), presidential candidate Donald Trump — who famously says he’s his own best adviser — sought counsel from Jewish friends and other figures in the community.

Act presidential, they advised, and serious. Clear up ambiguities you’ve created on issues that matter to Israel. Stay away from irrelevant domestic issues, and avoid riffs against Muslims, immigrants or your opponents. And for heaven’s sake, use a script.

He needed some advice. Many Jewish voters, even the 25 to 30 percent who vote Republican, have been disquieted by the vulgarity of his remarks, his equivocating response to the endorsement of former Ku Klux Klan leader David Duke and other white supremacists, his denigration of Mexican and Muslim immigrants and his pledge to be “neutral” in mediating between Israel and the Palestinians. A group of rabbis were threatening to walk out of his speech in protest.

Remarkably, Trump followed his friends’ advice. He used a teleprompter, something he has mocked President Obama for doing. And on substance, Trump nearly pulled it off. But not quite.

Bathed in the dramatic sports arena lighting of Washington’s Verizon Center stage, amid some 18,000 people, Trump declared himself “a lifelong supporter of Israel” and then hit what many ardent Israel supporters consider the right notes on all the key issues.

The reasons many Jewish voters are uneasy with Trump have little or nothing to do with Israel.

“My number one priority is to dismantle the disastrous deal with Iran.” Check.

“We will totally dismantle Iran’s global terror network which is big and powerful, but not powerful like us.” Check.

“No one has done anything about it [Iran’s ballistic missiles testing]… I promise you, we will.” Check.

For a moment, he abandoned his script to ad-lib a jab at the president. “With President Obama in his final year — yay,” he said, leading many in the audience in cheers and laughter. “He may be the worst thing to ever happen to Israel, believe me, believe me.”

Then back on message. He would veto any UN blueprint for an Israeli Palestinian deal, which President Obama is considering introducing. And he would move the U.S. embassy to “the eternal capital of the Jewish people, Jerusalem,” though the Palestinians also claim Jerusalem.

The audience had applauded Trump politely when he entered amid blaring sports arena music. And there was no mass walkout of protesters, though some in the halls outside wore buttons saying “I’m boycotting Trump.” But Trump’s forthright statements on those hot-button issues for Israel won thunderous cheers. “I love Israel. I love Israel,” he ended exuberantly. “In fact, my daughter Ivanka is about to have a beautiful Jewish baby.”

What might surprise Trump is that many Jews are frightened less by his stands on Israel than by his proposals to put up a wall with Mexico, and temporarily bar all Muslim immigrants or patrol Muslim neighborhoods.

Democratic congressman Brad Sherman of California was trolling through the press section amid the waves of applause. “He’s the best stadium entertainer in politics,” he sniffed. “But he’s light on content.”

I rode down the elevator with a Republican couple who had voted for now-defunct candidate Marco Rubio in their state primary. “We were dubious, but Trump said all the right things,” the man said. “I don’t know if he believes them. I hope he does.” His wife sounded less convinced.

But it seemed as if Trump — a man not known for finesse — had pulled off his delicate assignment.

Yet yesterday morning, barely 12 hours after Trump spoke, AIPAC president Lillian Pinkus reopened the conference by slamming Trump for attacking President Obama. “We do not countenance ad hominem attacks,” she said, visibly upset. “And we take great offense to those that are levied against the president of the United States from our stage.” 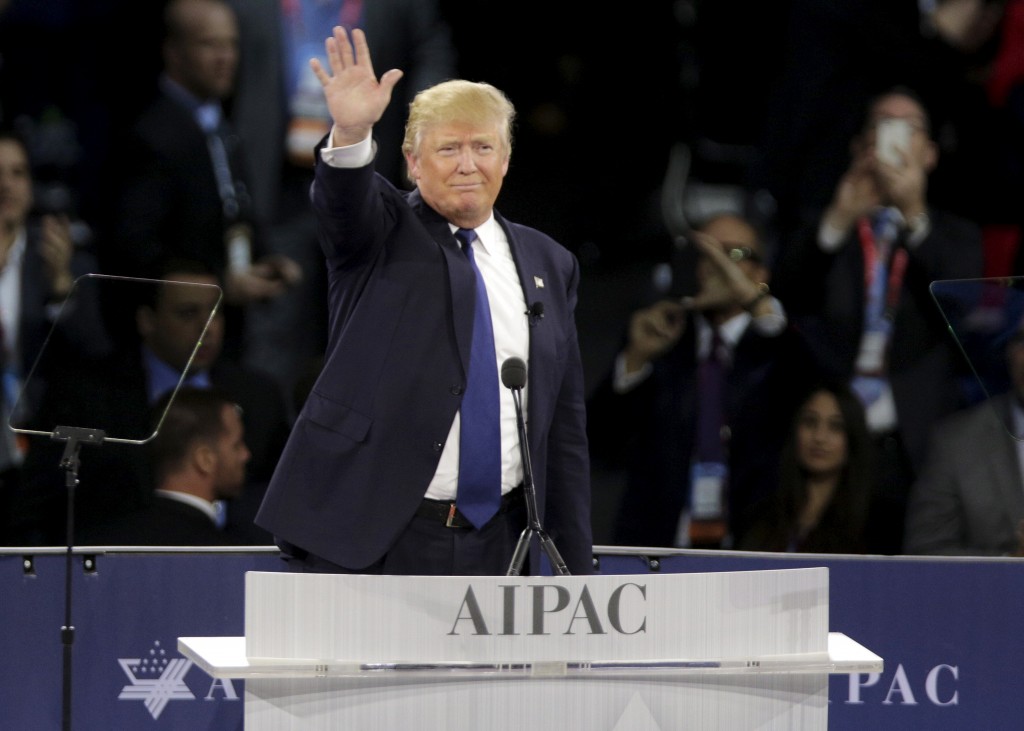 Her underlying message: Trump had shown himself insensitive to a particularly touchy issue in the Jewish community: AIPAC’s struggle to regain its non-partisan image after openly siding with Republicans last summer against the Obama Administration over the Iran nuclear deal. “It brought back memories of a very painful summer,” said one prominent rabbi. “His level of ignorance is appalling.”

More broadly, the reasons many Jewish voters are uneasy with Trump have little or nothing to do with Israel.

“I haven’t taken a poll, but I sense talking to many that at least three-quarters of Jewish voters see him as very scary,” said Dennis Ross, a longtime Israeli-Palestinian negotiator who has served presidents of both parties. “It’s the intolerance, the demagoguery, his seeming promotion of violence, the debasing of the political culture, the fundamental lack of civility — and he seems to run a content-free slogan campaign.”

Yet traveling the country, Ross has run into Jews who make a point of telling him they’re supporting Trump — one in Texas for his anti-immigration stance, another in Arizona because “we need someone who’s tough, who says things other people are afraid to.”

What might surprise Trump is that many Jews are frightened less by his stance on Israel than by his proposals to put up a wall with Mexico, and temporarily bar all Muslim immigrants or patrol Muslim neighborhoods.

“The concerns I hear begin with him being unknown and untested as a political leader,” said David Harris, head of the non-partisan global advocacy group, American Jewish Committee. “But at the heart of it are things he’s said that are contrary to the core values of many Jews. When he paints with a broad-brush about another group — Muslims, or Latinos — many Jews say to themselves, ‘Whoa, we’ve been there, and we know where it leads.’ So even if he’s not putting down Jews, we feel immediate anxiety.”

Others worry that his negative comments about Muslims will only add fuel to the anti-American fire among some Muslims abroad, or even here at home. It’s a theme Hillary Clinton has addressed, tweeting late last year: “Declaring war on Islam or demonizing Muslim Americans is not only counter to our values — it plays right into the hands of terrorists.”

On substance, Trump nearly pulled it off. But not quite.

What’s more, by the end of the AIPAC conference yesterday, word had spread of what many viewed as another Trump faux-pas: a front-page Washington Post story about a non-interventionist tone he struck in a Monday meeting with editors there. He’d suggested the U.S. could dial back on its involvement with the 67-year-old NATO alliance, for example. “At what point do you say, ‘Hey, we have to take care of ourselves,’” the Post reported Trump as saying. “I know the outer world exists. But our country is disintegrating…”

“Most Jewish voters want a muscular president, one who defends U.S. interests around the world,” said the head of a prominent conservative Jewish organization who asked not to be named. “They get nervous with one who’s disengaged.”

The AJC’s Harris, speaking to me yesterday from Brussels after the bombings, said much the same. “Our view is the world needs American leadership. Where it’s missing, bad actors try to fill the space and not just in the Middle East.” Yesterday’s bloody bombings only drove the point home, he said. “When a presidential candidate says, ‘We should stay home,’ we know the world will be more dangerous, and we’ll have to go back at higher cost.” 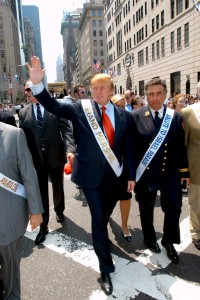 Trump marched as the Grand Marshall in the Salute to Israel Parade in New York in 2004. Photo by Seth Wenig/REUTERI

You may ask, why does Jewish opinion matter to Trump in his bid for the nomination? Jews are just 6 percent of the electorate, and only one-fourth to one-third of them vote Republican. But there are primaries coming up with lots of Jewish voters, such as in New York and New Jersey. And his positions on Israel are also important to a crucial non-Jewish Republican voting group, Christian evangelicals.

Finally, though Trump proudly proclaims he’s financing his own primary campaign (including loans), in a general election he will need outside donors. “There are big Republican Jewish donors who aren’t even sure he’s a reliable Republican on economic issues,” said the head of a major conservative Jewish group who knows these wealthy Republican business figures. “They’re not on board yet. And it’s not clear what they’ll do if he’s nominated: support Hillary, sit on their hands or reluctantly endorse him.”

For now, they don’t need to decide. Many primaries are over. And even in Maryland, where a primary looms, they still have an out. Jonathan Maltzman, rabbi of Kol Shalom synagogue in the Washington suburbs, says that among the minority of his congregants who are Republican, “not a single one will admit they’ll vote for him or Ted Cruz. They think he’s too off the wall. Their cop out is that they’ll vote for John Kasich, or not at all.”

These are concerns that even a near-flawless AIPAC speech won’t quiet.