Divided over Trump’s legacy, Republicans save his political future

Facing one last loyalty test, most Republicans refused to break from former President Donald Trump in the final battle over his presidency, voting Saturday to acquit him in an unprecedented second impeachment trial whose outcome had been predetermined from the start.

But like virtually every political battle of the Trump era, the conclusion of this latest fight left much unresolved and open to interpretation depending on one’s opinion of the former president.

The 57-43 vote will go down in history as the Senate’s final judgement of Trump’s involvement in the violent insurrection, and efforts to overturn the presidential election, a sustained campaign over many months that was driven by his lie that the election was stolen and culminated with his support for one last protest on the day of the attack.

A bipartisan majority of the Senate voted that Trump’s conduct was worthy of conviction, a permanent stain on his legacy. It was the largest bipartisan vote ever in an impeachment trial of a president. But a two-thirds vote of 67 or more senators was required for conviction. At least 17 Republicans would have had to join all 50 Democrats to render a guilty verdict, an outcome that was never likely in a party that remained loyal to Trump throughout his presidency and now beyond.

In the end, just seven Republicans voted to convict Trump. Five had signaled they were considering a guilty vote: Sens. Susan Collins of Maine, Lisa Murkowski of Alaska, Pat Toomey of Pennsylvania, Ben Sasse of Nebraska and Mitt Romney of Utah. The other two Republicans who voted guilty came as somewhat of a surprise: Sens. Bill Cassidy of Louisiana and Richard Burr of North Carolina.

The remaining Republicans, plus Burr, concluded in a vote before both sides presented their arguments that the proceeding was unconstitutional, based on an argument that the Senate cannot try a former president. That view is opposed by the legal community, including conservative scholars who have said the position is indefensible.

House managers reminded senators that Trump was impeached by the House while he was still in office, and pointed out that the framers of the Constitution wrote the Impeachment Clause with the belief that former officials could be held accountable for their actions in office — and did not specify that only current officials could face impeachment. One framer, none other than Thomas Jefferson, had in fact been impeached as a former governor by the Virginia state legislature at the time the Constitution was written.

But no matter. By sidestepping the merits of the case, most Republicans avoided taking a firm position on whether Trump crossed a line with his election conspiracy theories and now-famous call for supporters to “fight like hell” to overturn the results, which he made to a fired up crowd on Jan. 6 not long before some of them stormed the Capitol.

Republicans were aided by the attorneys representing Trump, who argued that his remarks at the rally were a form of free speech protected under the First Amendment.

“There is no evidence that Mr. Trump intended his words to incite violence,” Michael van der Veen, one of his lawyers, said Saturday.

Trump issued a statement after the acquittal vote thanking his defense team for “upholding justice and defending truth.” He praised the Republicans who backed him in the trial, and criticized the impeachment proceedings. “This has been yet another phase of the greatest witch hunt in the history of our Country. No president has ever gone through anything like it,” he said.

The Republican Party entered the trial divided over Trump’s legacy and how to move forward in the post-Trump era. It emerged from the impeachment proceedings just as divided, without any consensus.

A small group of House and Senate Republicans broke with Trump. Another faction of the GOP never wavered in their belief that Trump did nothing wrong. And the rest, including Senate Minority Leader Mitch McConnell and House Minority Leader Kevin McCarthy, found a nebulous middle ground, criticizing Trump’s role in the Capitol attack but voting not to hold him accountable.

The outcome proved that “the Republican Party is not yet ready to move on from Trump,” said Danielle Vinson, a political science professor at Furman University in South Carolina. 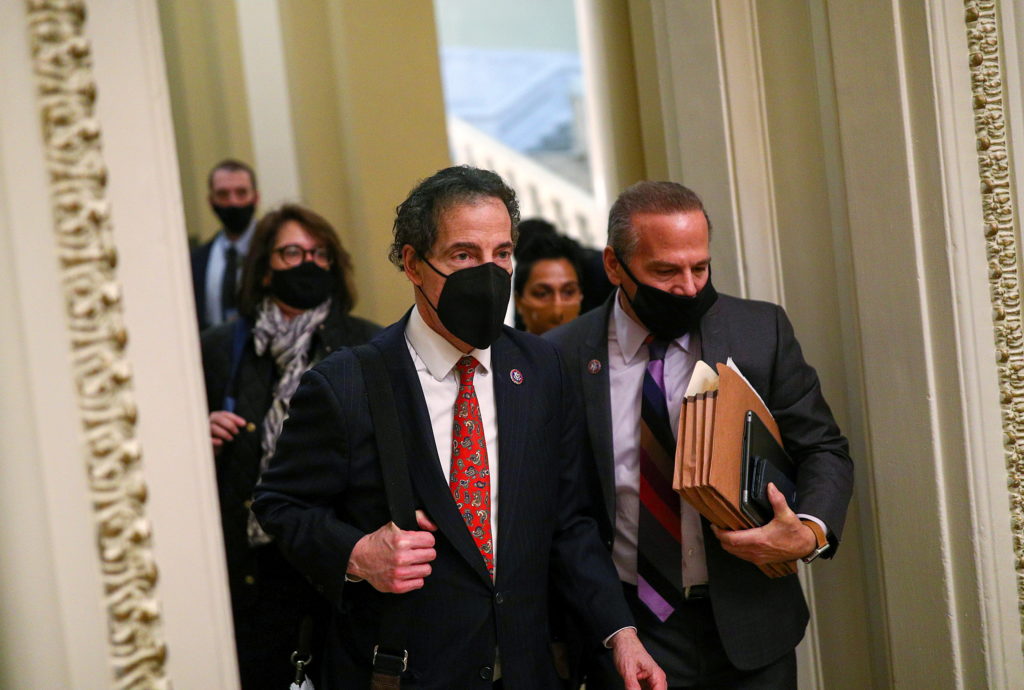 The party’s willingness to have it both ways with Trump frustrated Democrats to no end when he was in office. At the trial, the House managers appeared just as exasperated, arguing that it was perfectly clear to anyone who witnessed the events of Jan. 6 unfold that Trump incited a violent insurrection in a desperate effort to hold onto power.

“If that’s not a high crime and misdemeanor against the United States of America, then nothing is,” Rep. Jamie Raskin, D-Md., the lead House impeachment manager, said in his closing argument Saturday.

But if that was the case, Democrats failed to make it. For the second time in one year, the party impeached Trump in the House, but did not succeed in securing a Senate conviction. They went 0-2, while Trump emerged undefeated.

When House Democrats impeached Trump one week after the attack, they surely knew how the story would end. They decided to go forward anyway, arguing that if Congress did not try to hold Trump accountable, it would send the message that future presidents nearing the ends of their term could act in the same way without consequence.

“The stakes could not be higher. Because the cold, hard truth is that what happened on Jan. 6 can happen again,” said Rep. Joe Neguse, D-Colo., another House manager. “This cannot be the new normal.”

But the impeachment trial did seem part of a new political normal. Before Trump, the House had only voted twice to impeach a president, and the Senate had only conducted two impeachment trials: for Andrew Johnson in 1868, and for Bill Clinton in 1999.

“Trump’s first impeachment was historic, but to most Republicans it felt like retribution for Bill Clinton. The second one felt like, ‘OK, now we’re getting ridiculous,’” said Jason Shepherd, an attorney and Republican county chairman in Georgia. “The guy is on his way out of office. If you think he committed a crime, prosecute him for a crime.”

With two impeachments in little more than a year, the process suddenly became less of a rarity. Under the Senate rules, senators were not allowed to speak while the prosecution and defense teams presented their cases. Yet senators from both parties repeatedly broke the rules, apparently more at ease with breaching decorum in proceedings that have started to feel more routine. Several debates slowed the trial down, including a delay Saturday over whether to call witnesses.

There was no love lost between the House managers and Trump’s defense team, either. Each side barely disguised its contempt for the other, as accusations of shoddy lawyering flew back and forth.

But the vitriol on the surface belied a deeper division at the heart of the trial.

Democrats said the main issue on trial was the direction of the country. “This trial is not about Donald Trump,” Raskin said Saturday. “This trial is about who we are” as a nation, and whether Americans think it’s acceptable for white supremacists and other extremists to resort to violence to attempt to overturn an election.

Van der Veen, a Trump attorney, argued that the fundamental question of the trial was entirely different: why Democrats “glorified civil unrest” last year, referring to the largely peaceful protests for racial justice, but vilified Trump supporters for protesting the election. He had an answer ready.

The impeachment trial was a “brazenly dishonest attempt to smear, to cancel” by hypocritical Democrats obsessed by their “unhinged pursuit of a longstanding political vendetta against Mr. Trump.”

Outside of Washington, Democrats and Republicans appeared to watch the impeachment trial from their political corners, with their minds as made up as the senators.

“I believe Trump masterminded and caused an insurrection in our country against our federal government. And that is unforgivable, in my book,” said Marti Anderson, a Democratic state lawmaker from Iowa.

Shepherd, the Georgia Republican, said he believed Trump was innocent and should never have been impeached, but added that the trial hurt both parties. “The country has become so partisan, and both groups have so entrenched themselves in their own camps,” he said.