JACKSON, Miss. — Republican U.S. Sen. Cindy Hyde-Smith returns to Washington as a solidly loyal supporter of President Donald Trump after he stumped for her in a divisive Mississippi runoff shaped by her video-recorded remark about “public hanging.”

The election was rocked by the video, in which Hyde-Smith, who is white, said of a supporter, “If he invited me to a public hanging, I’d be on the front row.” A separate video showed her talking about “liberal folks” and making it “just a little more difficult” for them to vote.

Her comments, and the backlash to them, made Mississippi’s history of lynchings and violent suppression of black voting rights a theme of the runoff and spurred many black voters to return to the polls.

In the aftermath of the video, Republicans worried they could face a repeat of last year’s special election in Alabama, in which a flawed Republican candidate handed Democrats a reliable GOP Senate seat in the Deep South. The GOP pumped resources into Mississippi, and Trump made a strong effort on behalf of Hyde-Smith, holding last-minute rallies Monday in Mississippi.

Speaking to supporters after her win, Hyde-Smith vowed to fight for everyone in the state when she goes to Washington.

“I want everybody to know, no matter who you voted for today, I’m going to always represent every Mississippian. I will work very hard and do my very best to make Mississippi very proud,” she said. Speaking to reporters later, she said Trump had called to congratulate her and said she’d “been through a storm” and “survived it with grace.” 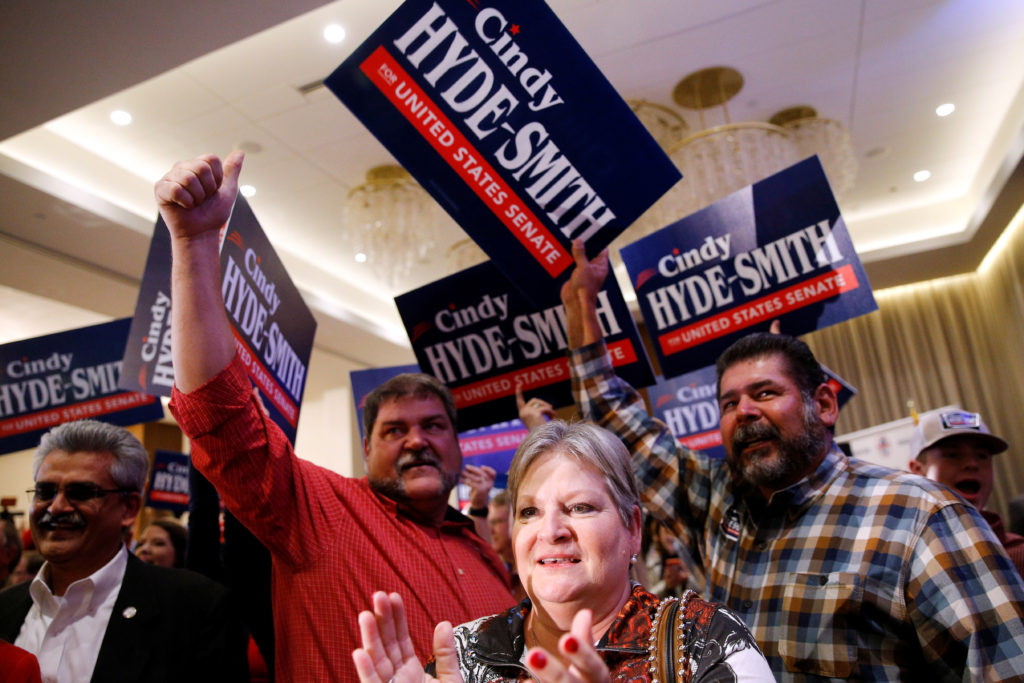 Her supporters said the furor over her comments was overblown. They also stuck by her as a photo was circulated of her wearing a replica Confederate military hat during a 2014 visit to Beauvoir, the last home of Confederate president Jefferson Davis.

“So many things are taken out of context,” said Elizabeth Gallinghouse, 84, from Diamondhead, Mississippi. “The fact that she toured Jefferson Davis’s house. You or I could have done the same thing. They said, ‘Put this cap on. Hold this gun.’ It was a fun time. She wasn’t trying to send any messages.”

Hyde-Smith was in her second term as Mississippi agriculture commissioner when Republican Gov. Phil Bryant appointed her to temporarily succeed GOP Sen. Thad Cochran. The longtime lawmaker retired in April amid health concerns. Her win Tuesday makes Hyde-Smith the first woman elected to Congress from Mississippi.

The contest caps a campaign season that exposed persistent racial divisions in America — and the willingness of some political candidates to exploit them to win elections. With Hyde-Smith’s victory, Republicans control 53 of the Senate’s 100 seats. The GOP lost control of the House, where Democrats will assume the majority in January.

In the final weeks of the runoff, Hyde-Smith’s campaign said the remark about making voting difficult was a joke. She said the “public hanging” comment was “an exaggerated expression of regard” for a fellow cattle rancher. During a televised debate nine days after the video was publicized, she apologized to “anyone that was offended by my comments.” But Hyde-Smith, 59, said the remark was used as a “weapon” against her.

Addressing his supporters Tuesday night at the Mississippi Civil Rights Museum in Jackson, Espy said: “While this is not the result we were hoping for, I am proud of the historic campaign we ran and grateful for the support we received across Mississippi. We built the largest grassroots organization our state has seen in a generation.”

The “public hanging” comment also resonated with his supporters. “That really offended me,” said Charles Connley, 60, a black voter from Picayune.

Some corporate donors, including Walmart, requested refunds on their campaign contributions to Hyde-Smith after the videos surfaced.

Hyde-Smith and Espy emerged from a field of four candidates Nov. 6 to advance to Tuesday’s runoff. She will complete the final two years of the six-year term Cochran started.

Shortly after the win Tuesday, Trump tweeted: “Congratulations to Senator Cindy Hyde-Smith on your big WIN in the Great State of Mississippi. We are all very proud of you!”