Former Florida Governor Jeb Bush and Senator Marco Rubio have received more endorsements from Republican governors and members of Congress than the rest of the GOP presidential field combined.

Rubio added to his number yesterday, when Rep. Trey Gowdy of South Carolina endorsed him at a series of campaign stops in Iowa, giving Rubio a total of 25 endorsements from high-ranking Republicans — second only to Bush, who has 30, according to the website FiveThirtyEight’s 2016 endorsement tracker. Donald Trump, in comparison, has zero high-ranking endorsements. Texas Senator Ted Cruz has 12.

Even so, Trump and Cruz are ahead in the polls, while Rubio is stuck in third place and Bush remains mired in the low single digits.

Endorsements still play an important role in presidential races. They signal a candidate’s level of support among party leaders, and can prod deep-pocketed donors to open their checkbooks. And endorsements from unions and other powerful groups can also help drive voter turnout.

But when it comes to influencing voters ahead of Election Day, the 2016 race is demonstrating that endorsements from elected officials do not carry the weight they once did.

Campaigns have become adept at using social media and other communications tools to appeal directly to voters, making endorsements from party leaders (and local newspapers) less valuable now than they were in the past.

This is especially true for outsider candidates like Trump and Cruz, who are capitalizing on the public’s deep hostility towards establishment politicians.

Endorsements from party leaders are less valuable now than they’ve been in the past, especially for outsider candidates like Donald Trump and Ted Cruz.

For the most part, “endorsements are pretty meaningless these days, with the amount of news coverage on television and everything else,” said Steve Schale, a Democratic consultant who ran President Barack Obama’s general election campaign in Florida in 2008.

Lawmakers seem to understand that their endorsements have lost stock in the age of Twitter and unlimited Super PAC spending, though that hasn’t stopped many from issuing them anyway.

When You Endorse Alone

“Trump’s success is a perfect example of the fact that people aren’t looking to Washington very much for their opinions,” said Republican Rep. Lou Barletta of Pennsylvania.

Barletta is in a unique position, as endorsers go: he’s the only member of Congress backing former Pennsylvania Senator Rick Santorum for president.

The two men struck up a friendship in the early 2000s, when Barletta was serving as the mayor of Hazelton, Pa., and Santorum visited the city as a senator to promote a development project there, Barletta said.

Santorum won the Republican Party’s Iowa caucuses in 2012 before fading from the race. This year, Santorum is hovering around 1 percent in national polls, but Barletta said that Santorum’s dim prospects of winning the GOP nomination didn’t factor into his decision to endorse him.

“I got to know him and his family and what he’s about. And that means a lot,” Barletta said.

Lawmakers often back candidates from their home state, based on longstanding political alliances, but that isn’t always the case. 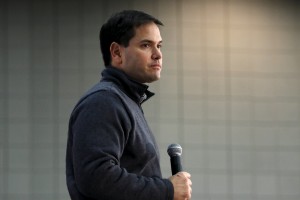 Gowdy, the chairman of the House Select Committee on Benghazi, could have endorsed Senator Lindsey Graham, a fellow South Carolina Republican who dropped his presidential bid earlier this month. He opted to endorse Rubio instead, giving the Florida senator, who is struggling to gain traction with the GOP’s Tea Party base, a conservative ally in a critical early-voting state.

At a campaign stop in Clinton, Iowa, yesterday, Gowdy said Rubio was the Republican candidate with the best grasp on national security and public safety issues. “There is no one better on those two issues than Marco Rubio,” Gowdy said, adding, “I found my candidate.”

The endorsement represented a small victory for Rubio’s campaign. “When you’re in a contest with a splintered electorate, getting a seal of approval from ideologues [like Gowdy] who appeal to specific groups of voters becomes more important,” said Hank Sheinkopf, a Democratic strategist who worked on former President Bill Clinton’s 1996 reelection campaign.

But Sheinkopf said it’s unlikely that the endorsement would boost Rubio’s poll numbers. Though Gowdy is a rising star on the right, he isn’t well known outside of South Carolina and Washington, D.C.

There are a few Republican governors, party elders and leaders in Congress who have remained neutral in the race thus far, and whose endorsement carries an undeniable cachet. They include House Speaker Paul Ryan, Mitt Romney, the Republican presidential nominee in 2012, and Iowa Governor Terry Branstad.

On the Democratic side, Massachusetts Senator Elizabeth Warren, Senate Minority Leader Harry Reid, and House Minority Leader Nancy Pelosi have yet to make an endorsement, though Reid and Pelosi are widely expected to back Hillary Clinton, the party’s current front-runner.

Yet even most high-profile politicians have a limited ability to influence voters in a national election, Bill McInturff, a prominent Republican pollster, wrote in an email.

“Very few endorsements matter from a polling perspective,” McInturff said. “[Former Secretary of State] Colin Powell’s endorsement of Obama in 2008 had impact on the polling in the race, and Obama’s endorsement today of Hillary Clinton would certainly have impact, but these are the rare exceptions.”

While more moderate candidates like Bush and Rubio continue to rack up endorsements, their top GOP rivals are plowing ahead without the support of leaders on Capitol Hill.

Earlier this year, Cruz secured an important endorsement from Rep. Steve King of Iowa, a vocal conservative with a formidable political operation in the state.

But overall, Cruz, who is disliked by many lawmakers in Washington, is losing the endorsement battle and it hasn’t stopped his surge in the polls.

“Here’s a guy who might be on his way to winning Iowa because of what he’s got going on the ground, with social media, his organization and the evangelical vote,” said Michael Bratton, a leading Democratic strategist. “Cruz could very well transcend [the tradition of endorsements] because of how politics has evolved.”

Left: Jeb Bush is leading the GOP field in endorsements, yet he remains stuck in single digits in the polls. Photo by Kevin Lamarque/Reuters