Do State of the Union speeches really matter?

State of the Union speeches are filled with forgettable policy details. But on rare occasions they produce memorable moments that help define an entire presidency, such as George W. Bush’s reference to an “axis of evil,” or Bill Clinton’s declaration that the “era of big government is over.”

Anyone hoping for such a moment in President Donald Trump’s first State of the Union speech Tuesday night may be disappointed.

Trump is planning to strike an optimistic tone in the speech, White House officials have said, a departure from his dark, campaign trail warnings of a country in decline and his inaugural vision of “American carnage.”

And though Trump has only been in office for a little more than one year, most Americans seem to have already made up their minds about his personality and political views, lowering the odds that Trump could say something that would reshape the public’s image of his presidency.

“With Donald Trump, public opinion is largely formed. The likelihood of a dramatic change in his numbers is probably far-fetched,” said Lee Miringoff, the director of the Marist Institute for Public Opinion. Presidents often get a short-term boost in popularity after giving the State of the Union speech, but “it evaporates pretty quickly,” Miringoff said.

The impact that State of the Union speeches have on passing legislation is also up for debate.

Between 1965 and 2013, presidents made 33 policy proposals, on average, in each State of the Union address, according to a study that was published by the Congressional Research Service in 2015. During that period, Congress passed 41.6 percent of the requests made in State of the Union speeches in the year they were given.

Historians have long struggled to quantify the effect that the speeches have on public policy.

But the study did not distinguish between major pieces of legislation and more minor proposals, and it did not conclude that the State of the Union speeches themselves played a crucial role in a president’s plans getting turned into law. Historians have long struggled to quantify the effect that the speeches have on public policy.

State of the Union speeches “make no difference in terms of legislation,” argued Shirley Anne Warshaw, a presidential scholar at Gettysburg College. “What it allows the president to do is fortify his position on national television.”

The speech will give Trump a high-profile opportunity to reach out to Democrats on immigration and infrastructure. Trump is pushing for a deal that would give young undocumented immigrants currently protected by the Deferred Action for Childhood Arrivals program, or DACA, a pathway to citizenship in exchange for stricter border security measures.

Trump also wants Congress to fund a major infrastructure initiative, and will likely use Tuesday’s speech to try and build momentum for a bill that could win bipartisan support in Congress.

At the same time, Trump is also expected to use the speech to promote his achievements since taking office, including the passage of a tax bill and Neil Gorsuch’s appointment to the Supreme Court.

“There’s a great temptation to say, ‘The state of the union is great, and here are the great things I’ve done to make it great.’ I think Trump will do that,” said Robert Lehrman, who served as former Vice President Al Gore’s chief speechwriter during Clinton’s first term in office. 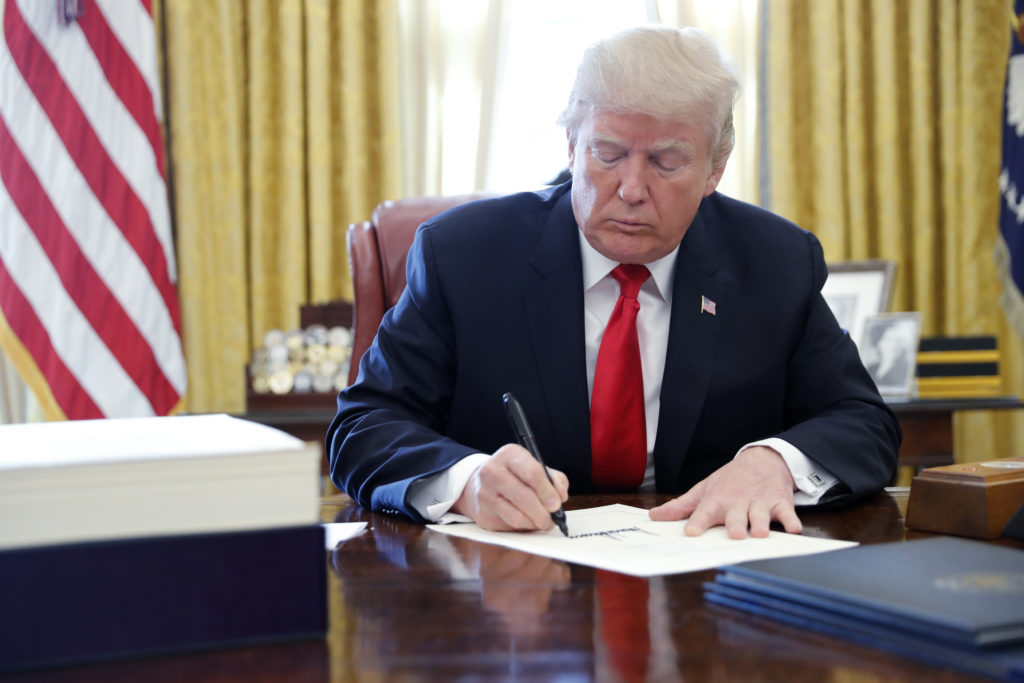 The speech will offer supporters evidence that Trump delivered on some of his top campaign pledges. But Lehrman, who teaches speech writing and public speaking at American University, said that Trump’s tendency to take credit for positive developments that clearly predate his presidency, like the growing economy, ignores a basic rule of good speechmaking.

“You don’t have to take credit for everything,” Lehrman said. When it comes to persuading the public, “one of the best ways is to concede a point to the other side. Barack Obama used to do that all the time.”

Obama also peppered his speeches with detailed stories, a rhetorical device that helped show the real-world impact of his policies on the lives of everyday Americans.

Trump has rarely done that as president, but that could change Tuesday. The White House has invited several guests to the State of the Union whose stories are intended to highlight Trump’s top legislative issues. The list of special guests includes a welder from Ohio, a U.S. Immigration and Customs Enforcement agent, and parents whose children were killed by the gang MS-13.

Whether Trump touches on their lives in detail or not, he has the skills to deliver a commanding performance, as long as he avoids making broad assertions that aren’t true, Lehrman said.

Avoiding mention of special counsel Robert Mueller’s Russia investigation would also help, as any off-script remarks would likely dominate news coverage of his speech. When Trump stays on message, “he is an excellent deliverer of his speeches,” Lehrman said.

Lehrman ticked off the list of things that make Trump an effective communicator.

“He has great posture. He uses his arms expressively, he has a resonant voice, and he uses pause and emphasis really well,” Lehrman said. “And his language, people can understand him. People feel that he tells it like it is.”

Left: President Donald Trump is expected to focus on the economy and immigration, among other issues, in his first State of the Union speech on Jan. 30, 2018. File photo by REUTERS/Jonathan Ernst