More than 10,000 Latinos caucused, up from roughly 1,000 eight years ago. And the group, The League of United Latin American Citizens of Iowa, has Donald Trump’s rhetoric on immigration to thank.

The overwhelming majority of Latinos caucused as Democrats, but it was that notorious Republican who motivated many of them to caucus at all.

“I decided to caucus, because I don’t want Donald Trump to become the president,” said Tania Fonseca, 23, a Mexican American who caucused in Marshall County, a swing county in central Iowa that voted for George W. Bush in 2000 and 2004 and President Obama in 2008 and 2012. “I want to learn a lot more about what the presidential timeline looks like.”

Fonseca, like many Mexican Americans, has voted in general elections, but caucusing always sounded a bit intimidating, especially for registered Democrats. The Democratic caucuses require everyone to publicly announce their choices, while the Republican votes are private.

However, Fonseca could not resist the lobbying calls from Latino community leaders to caucus, thanks largely to a Trump rally at Marshalltown High School, located about 50 miles northeast of Des Moines.

It was just one week before the caucus that school officials closed the school early to make room for Trump and his supporters. Fonseca helped organize and advise the student protests that greeted Trump when he arrived. Every Latino voter I spoke to in Marshalltown mentioned the rally and the fear it created among Latinos in this small town of 27,727.

“It’s terrifying but not surprising, because I feel like the tension has always been there.” — Veronica Guevara

“To me, it’s terrifying but not surprising, because I feel like the tension has always been there,” says Veronica Guevara, 24, who grew up in Marshalltown but moved to Des Moines months ago to serve as director of Latino Outreach for the Iowa Coalition on Domestic Violence. “I feel like now, the more front and center it becomes, the more chances we have of actually confronting these issues straight on.”

When Tasnia and her husband, Erich, entered the cafeteria at Fisher Elementary School in Marshalltown, Iowa, on Monday night, they felt like they were confronting a new world. They saw two big crowds huddled together — one side sporting Sanders paraphernalia and the other with Clinton signs.

Then there were the two other small pockets of people in corners of the room who were undecided voters or supporters of former Maryland Governor Martin O’Malley, who finished third and dropped out of the race the next day. 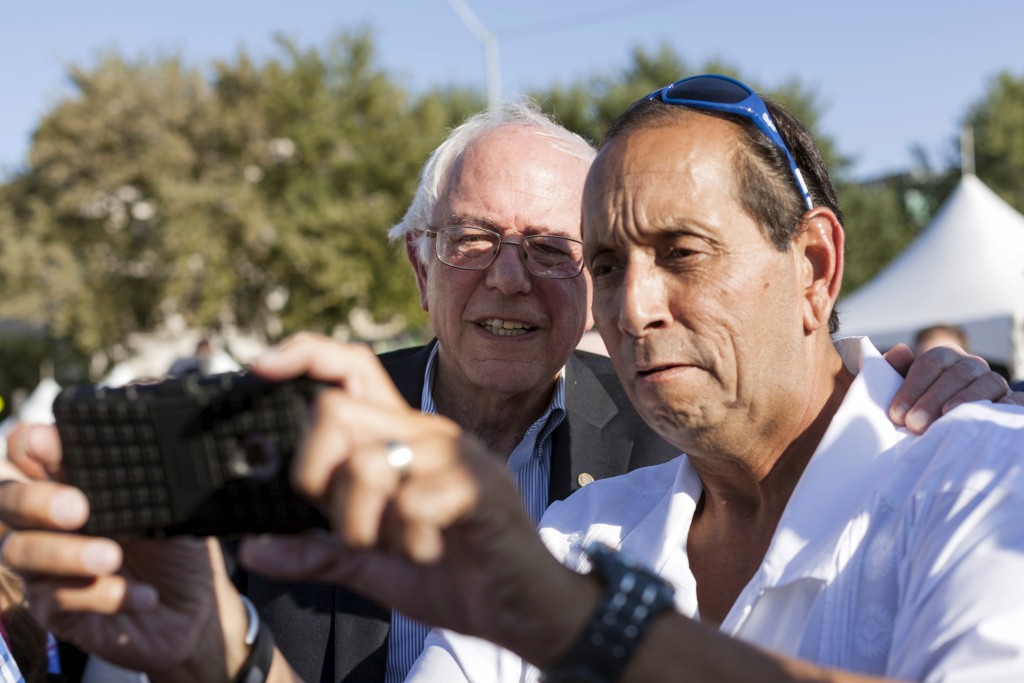 Erich and Tasnia joined the Sanders crowd. In fact, of the 207 caucus goers at the precinct, 26 were Mexican Americans. They all stood with Sanders, helping him win the precinct with 103 votes to Clinton’s 102 and carry Marshall County.

“Bernie’s track record on immigration is great, and Hillary is not the best on that issue,” said Jacqueline Guevara, a first-time, Mexican American caucus goer who supported Sanders.

Like many Mexican Americans with citizenship, Guevara has relatives who are undocumented and live in fear of being deported — a concern that has only gone up in response to Trump and the GOP primary field’s rhetoric on immigration. “We can no longer sit out on any part of the process,” Guevara said.

Left: Donald Trump acknowledges supporters as he and his wife Melania and members of their family leave the stage at his caucus night rally in Des Moines on Monday. Trump's rhetoric on immigration spurred an increase in Hispanic voter participation in the caucuses this year. Photo by Jim Bourg/Reuters

David J. Dent, associate professor of journalism and social and cultural analysis at New York University, edits the blog, bushobamaamerica.com, and is the author of a forthcoming book on swing counties. His is also the author of “In Search of Black America: Discovering the African-American Dream.”