Want to watch economists fight? Bring up the minimum wage

In the course of just the past two days, the minimum wage jumped up in 21 states — and odds are, you’ve got an opinion about that.

So does the academic world, which has studied — and argued over — the minimum wage’s impact within the labor market for more than 70 years.

Supporters and opponents of the minimum wage have clashed since the Fair Labor Standards Act passed in 1938. Advocates argue that a wage hike improves the quality of life for low-wage workers, who then funnel higher earnings back into the economy through consumption. Opponents say forcing employers to pay workers more deters hiring, slows business growth and ultimately leads to job loss.

On the state level, many voters have recently sided with the advocates. Twelve of the 21 minimum wage increases come because of legislation passed in the past two years. That includes four states — Alaska, Arkansas, Nebraska and South Dakota — whose voters passed minimum wage ballot initiatives in November. Nine other states’ minimum wages will increase automatically according to the inflation rate. 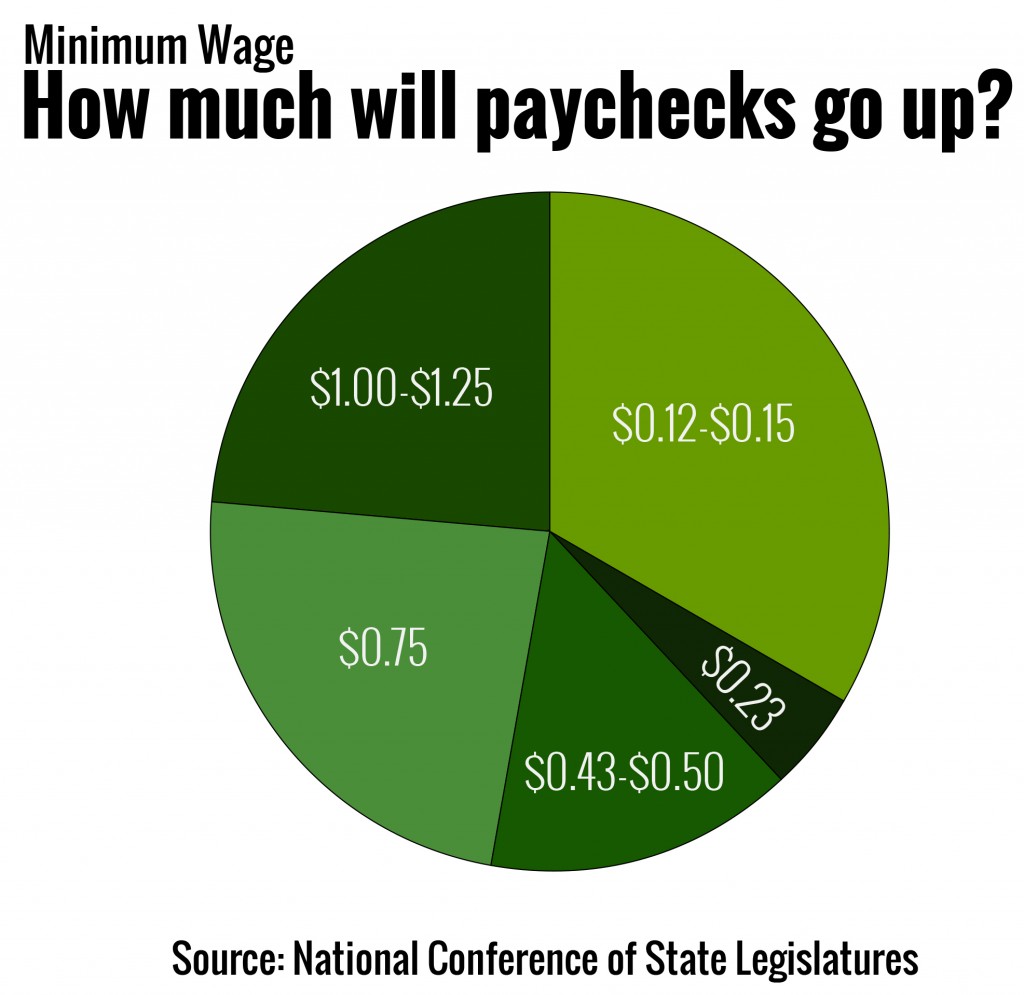 The 21 states which raised their minimum wages over New Year’s bumped up pay by different amounts, but this shows they generally were two kinds: incremental increases less than a quarter and large increases around a dollar an hour. Graphic by Laura Santhanam

After Delaware and Minnesota raise their minimum wages this summer, a majority of states, 29 in all, will have pay rates above the federal minimum.

The public debate here centers around a wage floor’s impact on employment and income rates. Does it raise the circumstances of the working poor by increasing paychecks or does the higher wage rate choke employers and trigger unemployment?

If employers are forced to pay more to their lowest-paid workers, opponents argue, they will have to cut jobs overall to make ends meet.

“If you’re an employer hiring at $15 an hour, you’d hire a different person, someone with more skills, a different type of worker and maybe use different types of technology,” she said. “The people most impacted are those who want to work but can’t.”

And “when you don’t get your first job, you can’t work up and get your second,” she added.

Advocates believe that a pay increase will boost the standard of living for workers and even pull some out of poverty.

“People understand that the lowest wage workers have the least [social] bargaining power, and the issue of income inequality and most growth accumulated at top is well known and understood,” said Jared Bernstein, a senior fellow at the Center on Budget and Policy Priorities and former economic advisor to the Obama administration. “Increases in minimum wage are pretty a simple, direct way to do something about that.”

The benefits to the workers then extend into the greater economy, added David Cooper, an analyst with the Economic Policy Institute. “When you raise the minimum wage, you put more money into the hands of low income folks, they’re more likely to go out and spend, so it leads to a boost in consumer spending.”

Supporters of the minimum wage argue that risks to employment are overstated.

Because turnover in low-wage jobs tends to be high, businesses may actually save in the long run “from not having to recruit, hire and train new workers all the time,” said Cooper. Or they can cut into their profit margins. Or raise prices.

Bernstein and others argue the quality of the jobs is a key component of the policy. “I think it’s wrong to say no one ever loses their job,” he said, but “if you do lose your job, the next one will be better because the wages will be higher.”

For years, both sides have had a wealth of studies to back up their respective claims. Proponents quote surveys that found no adverse effects on employment, and positive impacts on poverty levels. Opponents have their own literature. But earlier this year, the Congressional Budget Office published a widely-accepted report whose conclusions back up parts of each argument.

According to CBO, hiking the federal minimum wage to $10.10 an hour would increase wages for some 24.5 million workers, lifting some 900,000 people out of poverty. But the agency also found that a $10.10 minimum wage would eliminate the equivalent of 500,000 jobs.

Instead of changing the debate, the report has further fueled the cases proponents and opponents make.

Cooper believes the CBO report demonstrates that the benefits of raising wages would outweigh the costs. He points to the broad figures: millions of workers receiving higher earnings, versus a few hundred thousand lost jobs.

“You’re saying that 97 percent of people would benefit and maybe 3 percent would be worse off,“ he told NewsHour, “If all policies had 97 percent success, we’d be happy with that.”

The lost jobs figure is the central problem for the Heritage Institute’s Sherk, who worries about the long-term impacts of lost opportunity.

“There’s tremendous value in developing labor market skills. Experience makes you more productive,” he said. “That forgone experience, the productivity you’re not getting, that can hurt [workers] on into the future.”

What causes similarly qualified and credentialed researchers to interpret similar data so differently?

Part of it stems from academic complaints. Economists critique each others’ survey methodologies, the structure or timing or size of their studies and their chosen data points. A single piece of research could be praised as well-conducted and significant by those who support its conclusions, while those who don’t may point to flaws in data or method.

“It’s a bit of an indictment against economists,” said Bernstein. “You can hold the graphs up whichever way you want.”

In a larger sense, the dispute comes down to a simple, fundamental difference in philosophy: what role should government play in the labor market?

“People who like the minimum wage like it because they like other forms of government interventions into the marketplace,” said Richard Burkhauser, a professor of policy analysis at Cornell. “Some of us are more skeptical of those interventions. We think they do more harm than good.”

These skeptics say that wages will rise naturally when workers are able to increase their value in the marketplace through education or training.

“Our labor is not all worth the same,” said Sherk. “People have different levels of productivity. The best thing to do is helping people be more productive in the working place, [so they can] be more valuable.”

Low-wage jobs, he added, “are entry-level jobs. They provide skills and productivity to command more than minimum wage in the future.”

But Cooper, the progressive economist, believes that such government fiat is necessary to address problems in the marketplace.

“Any time you have an environment of high unemployment,” of the like that accompanied the Great Recession, “that puts downward pressure on wages, because employers know they don’t need to raise wages to attract or retain workers, which causes wages to stagnate or decline,” he said. “In that environment, one of the only ways to raise wages is to increase the minimum.”

There are also important principles at stake, he added.

“Poverty alleviation is part of it. Everyone recognizes that a job is the best anti-poverty tool,” he said. “At the same time, the minimum wage isn’t really designed as an anti-poverty tool. It’s a basic labor standard, the same as saying you don’t have to breathe asbestos on the job.”

“You can argue over where that standard should be set,” Bernstein agreed, “but it’s pretty radical to say there shouldn’t be a standard at all.”

This is one area of broad consensus. Economists generally agree that moderate increases in the minimum wage — such as those that have gone into effect this week — are likely to have moderate impacts overall. Neither side would sniff at those impacts on individuals — a few extra dollars a week in either a paycheck or in employee payroll can make a significant difference to either workers or employers struggling to make ends meet. But both sides tend to recognize that incremental minimum wage increases are neither an all-encompassing economic solution nor an all-destroying economic disaster.

“This isn’t a major issue like some of what we have before us, like how can we increase economic growth, how do we pay for Social Security.These are much bigger and more encompassing,” he said. “It’s odd to spend so much time on the minimum wage.”

Whether time spent on the debate is too much or too little, both sides hope to gain one thing from the stream of minimum wage increases going into effect: data. With 29 states requiring a minimum wage higher than the federal $7.25 rate and 21 states staying at $7.25, economists will have a laboratory for their next sets of arguments.

Left: A young girl holds up signs during a rally to show support for Walmart workers on Black Friday outside the Walmart store in Lakewood, Colorado, in November. The signs refer to the strikers' demand to have a $15 minimum wage for Walmart employees. Today, Colorado's minimum wage rose to $8.23 an hour, up 23 cents from last year. Photo by Rick Wilking/Reuters