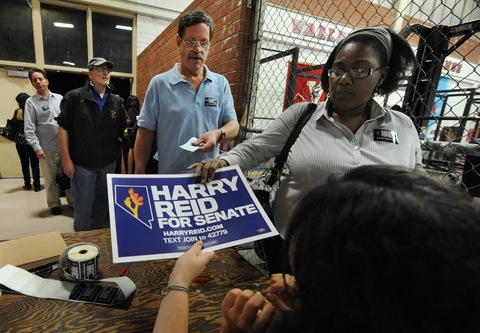 After four days on the ground in Nevada following what could be the nation’s most-watched Senate race, I came away with a sense that the prognosticators are right about the passion in the Tea Party movement in this recession-weary state. But they may also be underestimating the passion of other segments of the electorate.

The big story in the Silver State is Senate Majority Leader Reid’s battle to hang on to his seat for a fifth term. Because of the devastating effects of the economic downturn on Nevada — a 15 percent unemployment rate in Las Vegas and the highest state foreclosure rate in the country — Reid was viewed politically as a dead man walking. At least that was the case until June when Republicans nominated former state assemblywoman and Tea Party favorite Sharron Angle of Reno to run against him.

Angle was seen even by Nevada GOP leaders as too “far out” to have a real chance. Reid quickly aired ads highlighting her controversial previous public statements about phasing out Social Security and Medicare, closing the U.S. Department of Education, and calling the unemployed “spoiled,” all of which propelled him into the lead in the polls. As Nevada political analyst Jon Ralston told me, Angle may be the “only human being in the state of Nevada who could lose to Harry Reid this year.”

But anger at Washington for not fixing the economy, and at Reid for his support of the president’s agenda, runs deep in this state. Even though Reid has flooded the airwaves with paid TV ads on Angle’s “extreme” positions, the majority leader hasn’t been able to secure a lead. With just two weeks to go, the race is neck-and-neck.

Having seen the polls and read the stories, we arrived expecting to find a vigorous anti-Reid electorate. The picture on the ground was more mixed.

In the golfing and retirement community of Mesquite, about 80 miles northeast of Las Vegas, we met dozens of Tea Party supporters. Dr. Leo Black, who helped start a group called Friends of the Founding Fathers, said what got him involved in the campaign to elect Angle, was seeing “my Constitution being a shambles.” Black added that he’s “watched my freedom in the things I used to be able to do go away.”

At the same gathering, Paula Farrell, who heads the local Republican Party, which she described as believing the same thing as the Tea Party, put it this way: “I think the silent majority just finally got tired and thought they would speak up … finally we decided ‘I’m not going to take it anymore.'”

Back in Las Vegas, on his way into a Starbucks, businessman Darryl Cronfeld, who described himself as a registered Democrat, told me he’s upset with Reid because of his support for extending unemployment benefits to 99 weeks. Cronfeld said he can’t find people to work in his security firm because Reid and other Democrats “have all voted to keep the entitlements going.” He thinks a lower limit “will force people to get out and look. You just can’t keep printing money.”

But Reid’s supporters were also passionate about economic issues. Outside the same Starbucks, we ran into retired actor Ji-tu Cumbuka, who rushed to Reid’s defense. “He’s doing everything in his power … to get thousands of jobs for people who’ve been out of work …”

Not far away, at a shopping center with several empty stores, Miriam Marroquin stopped long enough to tell us she likes Reid, “because he is one man who work(s) for the people, for poor people … I am an immigrant and I know he wants to work for us, too.” Asked about Angle, Marroquin repeated what she saw in the one debate between the two: that Angle said she’s not responsible for creating jobs. “If she’s not responsible for jobs, then what are we going to do?”

In our random hunt for voters, the passion seemed as real on the left as it was on the right. And all the voters we spoke with said they planned to vote. But lest we jump to conclusions, we heard a cautionary note as well. D. Taylor, president of the local Culinary Workers Union, which represents thousands of cooks, waiters and others who are the backbone of much of the entertainment industry in this tourist-dependent state, believes Reid would do far more for Nevada and his members than would Angle. He said this is by far the toughest political environment he’s ever experienced.

Describing his membership, Taylor said “…most people are trying to pay their rent or mortgage, feed their families, make sure they have the car payment done, provide clothes and books for their kids; politics is about 18th on the list.” He said his goal is to get them out to vote, and “that’s a real challenge.”