Hillary Clinton and Donald Trump are both in favor of increasing the federal minimum wage, raising the prospects that the next Congress could act on the issue for the first time since 2007.

But five states this year aren’t waiting for the next administration. On Tuesday, residents of Colorado, Arizona, Maine and Washington will vote on ballot measures that would give low-wage workers a raise, the most minimum wage initiatives in one election in a decade.

Colorado, Arizona and Maine have measures on the ballot that would gradually increase the minimum wage to $12 an hour by 2020. In Washington, the initiative would phase in a $13.50 minimum wage by 2020. South Dakota is voting on a measure that would decrease the state’s minimum wage for workers under the age of 18.

“Working families are frustrated that the recovery isn’t translating into better paying jobs and that the Republican Congress has blocked any action to raise pay,” said Paul Sonn of the National Employment Law Project, a national advocacy organization for employment rights of lower-wage workers.

“And so they are taking matters into their own hands by voting for minimum wage increases on the ballot and for candidates who say they’ll fight to raise wages.”

Now, roughly 2 million workers could be affected by this year’s ballot initiatives, according to the National Employment Law Project.

Tyler Williams, a volunteer for the Maine’s People’s Alliance, a group backing the state’s proposed minimum wage increase, said that a wage hike would help families like his that have struggled to get by on low-paying jobs.

“I’ve been working [since] the time I was 15 to help put food on the table for my family,” said Williams, who recounted the challenge of working a minimum wage job at a Wendy’s fast food restaurant.

Williams’ group estimates that the ballot initiative would help over 80,000 Maine families and 181,000 individuals.

While low-wage workers like Williams overwhelmingly support such increases, local chambers of commerce, along with many businesses and business associations oppose the measures.

States “are taking matters into their own hands by voting for minimum wage increases on the ballot.”

Jack Mozloom, the communications director of the National Federation of Independent Business, said that an arbitrary increase in the minimum wage would hurt small businesses in particular, many of which operate on shoestring budgets and rely on entry-level workers.

“Small business owners will be discouraged from hiring anybody new,” Mozloom said. “They will be encouraged to automate and eliminate human jobs, or they will certainly make other difficult cuts elsewhere.”

The conservative American Action Forum has calculated that 289,782 jobs could be lost by 2023 if the minimum wage initiative passes in all four states. Mozloom claimed that roughly 60 percent of the job losses would come from the small business sector.

But economists and other policy experts are still debating how minimum wage increases affect the economy and workforce.

“Of the nearly two dozen federal minimum wage hikes since 1938, total year-over-year employment actually increased 68 percent of the time,” Nick Hanauer, a venture capitalist who supports raising the minimum wage to $15 an hour, wrote in a column this fall.

Conservative economists have pushed back on that data. Mark Perry, a senior scholar at the right-leaning American Enterprise Institute, noted that low-skilled workers can experience other negative employment effects such as a reduction in hours or benefits.

Plus, Perry asked, “How much more might it have gone up without the artificial increase in labor costs for unskilled workers?” 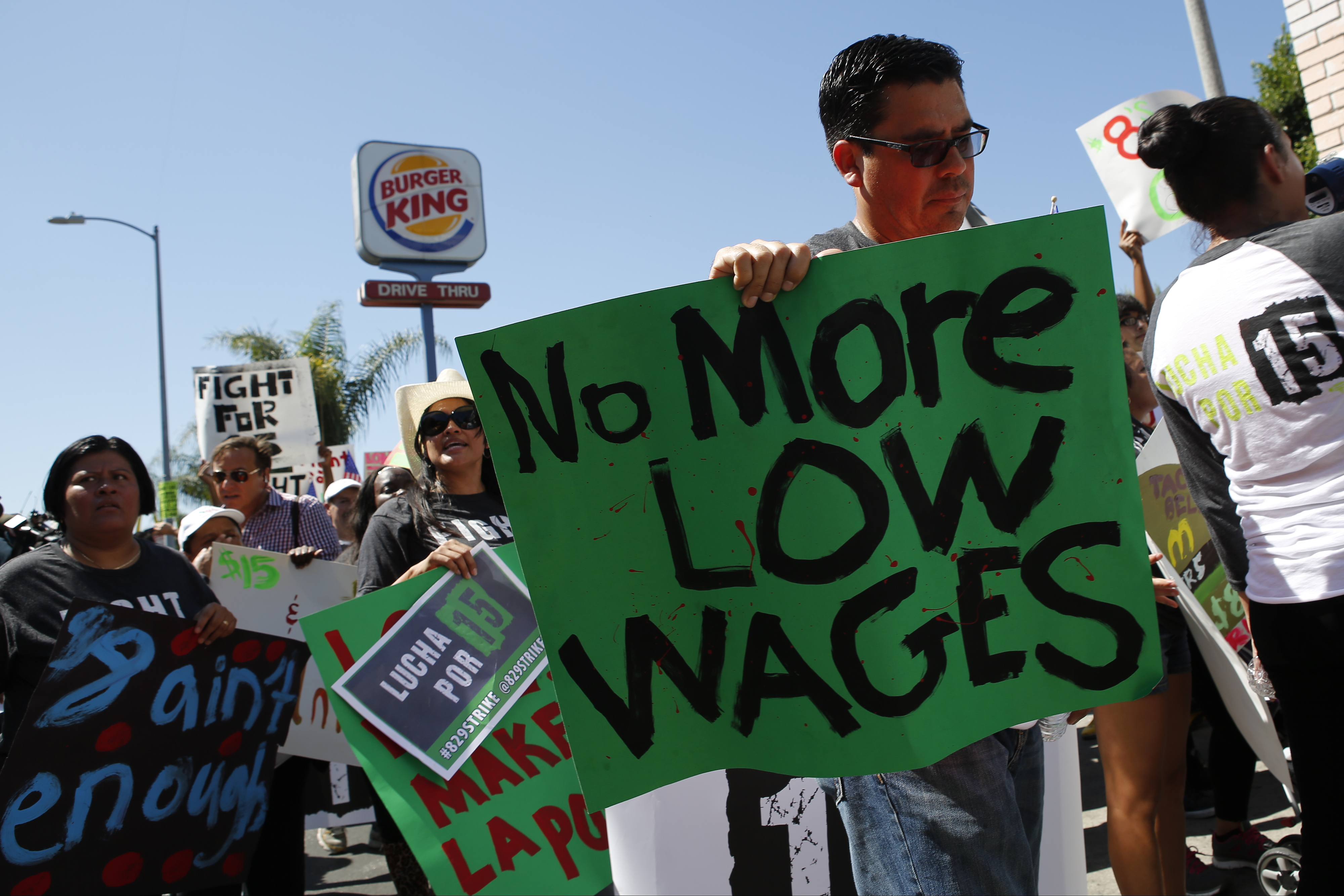 Fast-food workers and supporters at a minimum wage protest in California in 2013. Congress last voted to raise the federal minimum wage in 2007. Photo by Patrick T. Fallon/Bloomberg via Getty Images

Despite continued opposition from some conservatives, polls show there is growing support among businesses and Republican leaders for raising the minimum wage.

Edwin Zoe, a Republican and the founder of Zoe Ma Ma, a fast-casual, homestyle Chinese restaurant located in Boulder and Denver, said he was in favor of raising Colorado’s minimum wage to $12 by 2020.

“On the micro level for me, I feel very strongly that my employees’ well-being is my business’s well-being,” Zoe said. He added, “Workers are not just an output, they’re also an input. Studies show that more money goes back to the local economy when the minimum wage is raised.”

Nationally, more than 1,000 businesses have signed a petition by the advocacy group Business for a Fair Minimum Wage in support of raising the minimum wage to $12 an hour by 2020. “The polling shows that small businesses are in favor of it and have been for a while,” said Bob Keener, a spokesman for the group.

A poll conducted by Frank Luntz, a Republican pollster, found that 80 percent of business executives supported an increase in their state’s minimum wage. A mere 8 percent opposed it.

Polls showing support for raising the minimum wage appear to be swaying a growing number of conservatives, among them Republican Sen. Ron Johnson of Wisconsin, who is locked in a tough rematch with Russ Feingold, a Democrat who lost the Senate seat to Johnson in 2010. Johnson recently abandoned his opposition to a federal minimum wage and suggested that the current rate of $7.25 should be fixed to inflation. Feingold favors a $15 minimum wage that he says should be phased in over time.

Polls showing support for raising the minimum wage appear to be swaying a growing number of conservatives.

Feingold and other Democrats are now using calls to raise the minimum wage, “especially calls for a $15 minimum wage, to get an edge on their opponent,” said Sonn.

Since 2000, every ballot initiative looking to raise the minimum wage has passed. That trend could continue this year: polls show that the measures in Colorado, Arizona, Maine and Washington are likely to pass as well.

With broadening support for minimum wage increases in cities and states, some experts said that a few more successful state ballot initiatives could put pressure on Congress to act.

“The idea that Washington really needs to raise the [federal] minimum wage has a lot of momentum,” Sonn said. “We think there’s a very good chance of action next year.”

Correction: An earlier version of this article incorrectly listed California as one of four states with ballot measures to raise the minimum wage. The states are Colorado, Arizona, Maine and Washington.

Left: Supporters waved signs at a union rally in New York in January. On Election Day, four states are voting on measures to raise their minimum wage. Photo by Lucas Jackson/Reuters