Geithner: ‘I Don’t Understand’ Why Debt Ceiling Debate Is Back 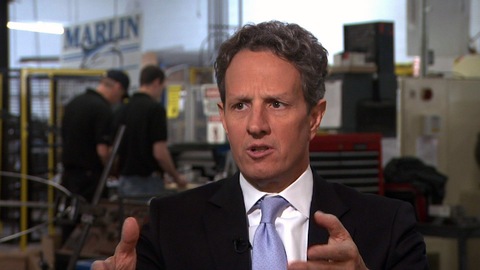 Treasury Secretary Timothy Geithner told the PBS NewsHour’s Jeffrey Brown during a factory tour Thursday that he couldn’t understand why the debate over the federal debt limit is back again.

The visit to Marlin Steel Wire Products, a Baltimore manufacturer of wire baskets that employs 30 workers and exports to some 36 countries around the world, was part of an ongoing effort to get out of Washington to promote the administration’s economic agenda.

Geithner made those comments during a wide-ranging interview about the economy that touched on sluggish overall job and economic growth, new turmoil in Europe, JPMorgan’s spectacular trading losses that have put a renewed focus on Wall Street regulation plus a new flare-up in Washington over the federal debt limit.

Here are three excerpts of their discussion. First, the renewed debate over the federal debt limit:

JEFFREY BROWN: Here we are again this week where the debt limit question has bubbled up. Do you see —

TIMOTHY GEITHNER: Can you believe it?

JEFFREY BROWN: Can you believe it?

JEFFREY BROWN: You can’t because, you can’t understand because —

TIMOTHY GEITHNER: Because look at how much damage it caused the country last August. I mean, it was terribly damaging for the country. And the idea you can govern effectively at this time in American history — you know, we’re fighting wars. We’ve got a major financial crisis in Europe. We have all of these challenges for the rest of the country with political politicians threatening to default if we don’t adopt a partisan political agenda. It’s deeply irresponsible. There’s no basis for it.

The secretary also discussed a “perception problem” with CEOs of major banks serving on the board of the New York Federal Reserve:

JEFFREY BROWN: Elizabeth Warren, who helped set up the Consumer Protection Agency for the administration, now running for the Senate in Massachusetts – she said that Jamie Dimon, head of JPMorgan, should not be sitting on the board of the New York Fed, that that just – it isn’t right, because they help regulate those banks.]

TIMOTHY GEITHNER: That’s not a new observation, not a new concern. It’s been made by many people over the last several years.

TIMOTHY GEITHNER: I think it is true. And I think it’s a problem that that – the structure of the Fed, established 90 years ago, and it’s true for Federal Reserve banks across the country, creates that basic perception. And I think that’s something worth trying to change. But the American people should understand that although the Fed was set up that way, those banks and the members of the board play no role in supervision. They have no role in the writing of the rules, and they play no role in decisions the Fed makes about how to respond to a financial crisis. Their role is a much more limited role, and the role is to help provide a perspective on what’s happening in the economy as a whole. But I agree with you that the, that perception is a problem. And it’s worth trying to figure out how to fix that.

JEFFREY BROWN: Do you think Jamie Dimon should be off the board?

TIMOTHY GEITHNER: Well, that’s a question he’ll have to make and the Fed will have to make. But again, on the basic point, which is it is very important, particularly given the damage caused by the crisis, that our system of oversight and safeguards and the enforcement authorities have not just the resources they need, but they are perceived to be above any political influence and have the independence and the ability to make sure these reforms are tough and effective so we protect the American people, again, from a crisis like this. And we’re going to, we’re going to do that.

The two also discussed how President Obama’s economic record will play out on the campaign trail this year:

JEFFREY BROWN: So you think he’s got a record on jobs and the economy that he can proudly run on?

TIMOTHY GEITHNER: Absolutely. And again, if you look at — look at how we’re doing relative to any other major country in the world today. Look at how we managed our crisis relative to what, not just how the U.S. managed in the past or how Japan did, but look at Europe today, and if you look at any measure that we can point to of economic strength, they provide overwhelming support for the choices he made early on. And remember, those were tough – very tough choices, put out the financial fires, get growth started. He did it with almost no help from his opponents, deep political costs, and those things made us — make us stronger today.

Tune in to Thursday’s NewsHour broadcast for the full interview.