President Donald Trump’s executive order on refugees set off a firestorm around the world this weekend, with broad implications for people seeking entry into the United States.

As the debate heats up, here’s a guide to some of the competing claims being made about the new policy, and how they hold up under closer scrutiny.

The claim: 109 people were affected by Friday’s immigration ban
The rundown: That may be a lowball estimate

President Trump said Monday that his executive order only affected 109 people trying to enter the U.S. this weekend. But several critics have claimed the short-term number could be higher.

Only 109 people out of 325,000 were detained and held for questioning. Big problems at airports were caused by Delta computer outage,…..

The American Civil Liberties Union estimated that between 100 and 200 people were immediately impacted by the order. The New York Times reported that 173 people overseas were blocked from boarding planes to the U.S. And over the weekend, thousands of people protested the orders at airports in New York, Washington, D.C., Detroit and elsewhere around the country as people arriving in the U.S. were detained, making the final number of people unclear.

Adding to the confusion, White House Chief of Staff Reince Priebus said Sunday that “going forward” the executive order wouldn’t block U.S. green card-holders from reentering the country. The comment seemed to contradict part of the original executive order, and opened the door to more questions about how the new policy will be implemented. According to CNN, at least 170 people with green cards were admitted into the U.S. through Sunday afternoon.

Regardless of the number of people affected in the order’s immediate aftermath, it has long-term implications. One news report suggested up to 134 million people worldwide could be impacted by the new travel restrictions.

The claim: Court stays issued over the weekend will block Trump’s order
The rundown: The federal court rulings did not block the entire order

A federal judge in Brooklyn issued a stay Sunday temporarily blocking parts of President Trump’s executive order on refugees. The ruling came after the ACLU filed a lawsuit on behalf of two Iraqi citizens, who were detained at John F. Kennedy International Airport in New York upon arriving in the U.S.

A federal judge in Virginia issued a similar ruling over the weekend blocking travelers who had been detained at Dulles International Airport, outside of Washington, D.C. from being deported. That ruling also ordered that the detained travelers be given access to an attorney.

The decisions were a victory for opponents of the policy. But they’re just the first step in what could be a lengthy legal battle. They also didn’t block Trump’s entire executive order: The rulings only blocked federal officials from deporting green card-holders who were detained after the order went into effect. The court decisions didn’t weigh in on the constitutionality of President Trump’s policy, meaning that some provisions in the executive orders could still be upheld in court.

The claim: Trump’s order is similar to President Obama’s 2011 review of Iraqi visas
The rundown: There are a number of key differences

In defending his executive order, President Trump compared the ban to actions taken by President Obama during his first term in office.

“My policy is similar to what President Obama did in 2011 when he banned visas for refugees from Iraq for six months,” Trump said in a statement on Sunday.

But a review of the record shows that’s a big stretch.

In 2011, the Obama administration announced plans to review the status of around 58,000 Iraqi refugees living in the United States. The review was launched after two Iraqi men were arrested on federal terrorism charges in Kentucky that year. (They had tried to ship weapons and money from the U.S. to insurgents in Iraq, and also admitted to building bombs used against American soldiers in Iraq. The men plead guilty and were sentenced to federal prison in 2013).

Obama’s order reviewed the immigration status of the 58,000 Iraqi refugees, and set up a stricter vetting process for Iraqis seeking special visas to enter the U.S. The extra security clearance caused delays in processing visas. The program was eventually rolled back in 2014, then reinstated the following year.

But the program was not a blanket ban on all refugees from Iraq, which is what President Trump imposed with his executive order last week. Obama issued a statement Monday saying his actions never halted Iraqi visas, but instead created a tougher temporary vetting system. The Trump administration’s actions are significantly broader. 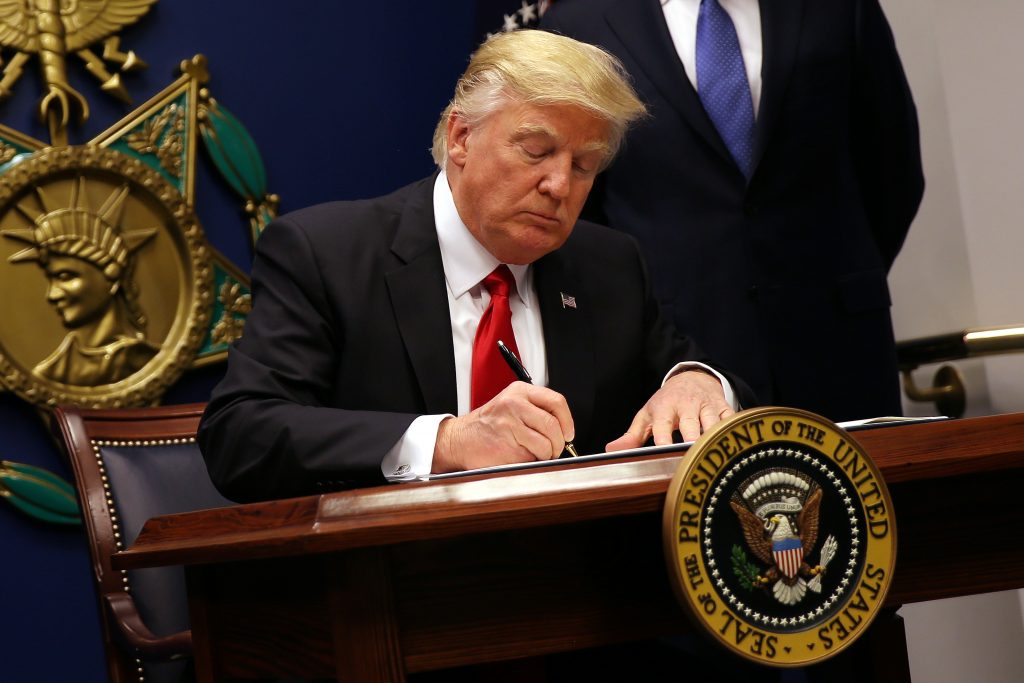 President Trump and administration officials also compared his executive order on refugees to a visa waiver program put in place by the Obama administration in 2015. But that comparison isn’t totally accurate, either.

In late 2015, Obama signed a year-end spending bill that included a change to an existing visa waiver program. The measure, called the “Visa Waiver Program Improvement and Terrorist Travel Prevention Act of 2015,” placed restrictions on natives of Iran, Iraq, Sudan and Syria applying for U.S. visas. The restrictions also applied to anyone who had traveled to those countries since 2011.

The Obama administration did create the list, but the visa waiver program vetted applicants on a “case-by-case basis,” as the Department of Homeland Security noted last February. The program still allowed people from the listed countries to apply for visas, and gave exemptions to certain individuals, such as humanitarian aid workers and journalists. “The new law does not ban travel to the United States, or admission into the United States,” DHS said in its statement last February.

President Trump’s executive order, on the other hand, puts a 90-day freeze, without exemptions, on refugees and visa holders traveling to the U.S. from the seven listed countries. And it indefinitely blocks Syrian refugees from entering the country as well.

The claim: The order makes the U.S. safer
The rundown: A lot of lawmakers — Democrats and Republicans — don’t think so

President Trump said Sunday that the order would make the country safer, while dismissing criticism that it amounted to a de facto ban on Muslims entering the country. “This is not about religion — this is about terror and keep our country safe,” Trump said in a statement.

Some Republicans, including House Speaker Paul Ryan, backed the refugee order. But many GOP officials said they believed the policy would not make the country safer, breaking from the president on one of his signature campaign issues.

Sens. John McCain (R-Ariz.) and Lindsey Graham (R-S.C.) issued a joint statement saying the order could “become a self-inflicted wound in the fight against terrorism.” They added: “This executive order sends a signal, intended or not, that America does not want Muslims coming into our country. That is why we fear this executive order may do more to help terrorist recruitment than improve our security.”

Former Republican officials criticized the order as well. Mitch Daniels, a former governor of Indiana and official in the George W. Bush administration, said he hoped Trump would “rethink” the policy.

“If the idea is to strengthen the protection of Americans against terrorism, there are many far better ways to achieve it,” Daniels, the president of Purdue University, said in a statement.