WASHINGTON — The vast complexities of a dangerous world were cast in too-simple terms in the latest Republican presidential debate.

Here’s a look at some of the claims Tuesday night and how they compare with the facts:

TED CRUZ: “You would carpet bomb where ISIS is, not a city.”

THE FACTS: The Texas senator’s conviction that the Islamic State group can be routed with an air campaign of overwhelming force is hard to square with the reality on the ground. ISIS fighters are holed up in a variety of cities, amid civilians, raising questions about how he could direct a carpet bombing that only singles out the enemy.

He was asked in the debate if he’d be willing to cause civilian casualties in Raqqa, a major Syrian city that has become de facto capital of the Islamic State group’s so-called caliphate. ISIS is also in control of the Iraqi city of Mosul.

DONALD TRUMP: “Our country is out of control. People are pouring through the southern border.”

THE FACTS: Arrest statistics are widely regarded as the best measure, if an imperfect one, of the flow of people crossing illegally into the U.S. And Trump’s suggestion that illegal immigration is increasing at the border is not supported by arrest statistics discussed in recent months by Homeland Security Secretary Jeh Johnson.

In recent months there has been a spike in the arrests at the border, but primarily of children traveling alone and families, mostly from Central America.

JEB BUSH: “We need to embed our forces, our troops, inside the Iraqi military.”

THE FACTS: The U.S. is already doing that.

U.S. special forces are working side by side with Iraqi forces in the fight against Islamic State militants and American military advisers and trainers are working with Iraqi troops in various locations. To be sure, Bush has called for an intensification of the military effort in a variety of ways, but debate viewers would not know from his comment that U.S. troops are already operating with Iraqi and Kurdish forces.

His comment fits a pattern in the Republican race as a number of candidates criticize President Barack Obama’s course against ISIS while proposing largely the same steps that are already underway.

CRUZ: “And even worse, President Obama and Hillary Clinton are proposing bringing tens of thousands of Syrian refugees to this country when the head of the FBI has told Congress they cannot vet those refugees.”

THE FACTS: Cruz repeated inflated estimates of how many Syrian refugees the Obama administration plans to admit to the United States. Obama has announced plans to resettle about 10,000 refugees in the next year.

CARLY FIORINA, speaking of security threats to the U.S.: “We need the private sector’s help because the government is not innovating, technology is running ahead by leaps and bounds…They must be engaged and they must be asked. I will ask them.”

THE FACTS: They’ve been asked.

The Obama administration has been in discussions with technology companies, especially in Silicon Valley, over the last year about the use of encrypted communications and how the government can penetrate them for national security purposes. After the attack in San Bernardino, California, Obama again said he would urge high-tech and law enforcement leaders to make it harder for terrorists to use technology to escape justice.

That’s not to say the effort has been effective. But as in the case of candidates talking about the campaign against ISIS, Fiorina pitches something that is in motion.

CRUZ: “We didn’t monitor the Facebook page of the San Bernardino terrorist because DHS thought it would be inappropriate.”

THE FACTS: The Department of Homeland Security has authority to look at social media such as Facebook when evaluating visa applications, and the agency says it does so in some cases. But some experts say that scrutinizing social media accounts of every visa applicant would dramatically slow the approval process, including for tourist visas.

It’s also unclear whether looking at the Facebook pages of the shooters in the California attacks would have prevented the attacks.

The male attacker, Syed Farook, was a U.S. citizen, born in Illinois, and never needed a visa. His wife, attacker Tashfeen Malik, 29, did enter the country on a fiancee visa and had used social media to speak of martyrdom and jihad. But Rep. Adam Schiff, D-Calif., has said such posts weren’t public. After the attacks, Facebook did find a profile under an alias linked to Malik with a post pledging her allegiance to the Islamic State. 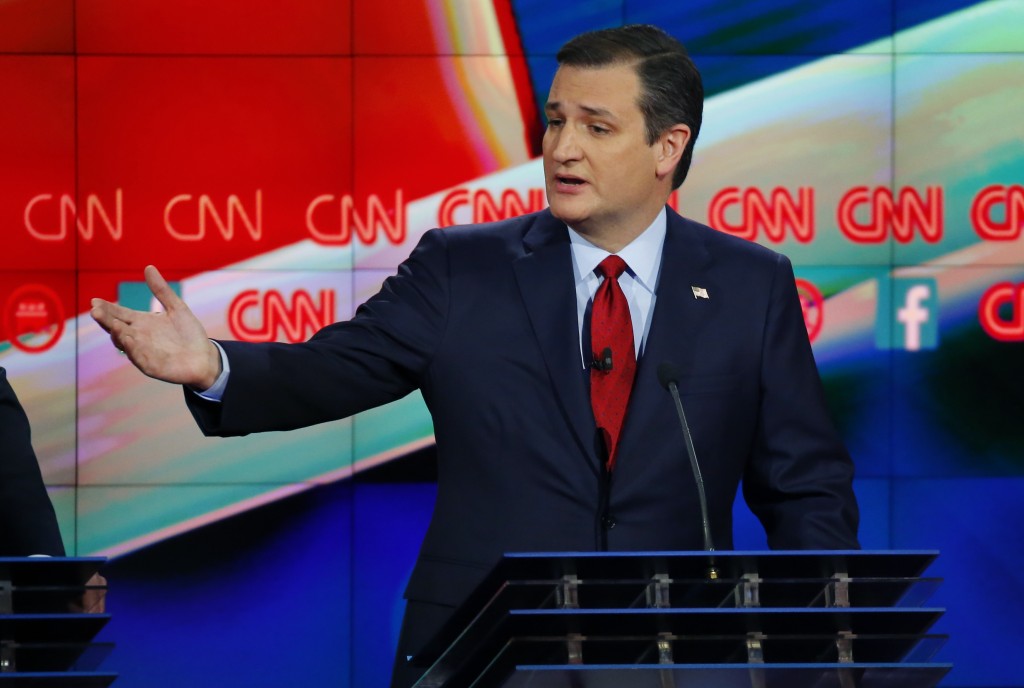 THE FACTS: Cruz did not acknowledge in his blanket warning that moderate rebel groups in Syria have been fighting against the Islamic State group, the al-Qaida-aligned Nusra Front and forces loyal to Syrian President Bashar Assad since the start of that country’s civil war.

While there has been concern over U.S.-trained Syrian rebels handing over some of their equipment to the Nusra Front in exchange for safe passage, they are considered key in the fight against both radical groups and Assad — a leader who a number of GOP candidates said in the debate should be removed because of his close alliance with Iraq.

MARCO RUBIO on facing terrorist threats: “We need more tools, not less tools. And that tool we lost, the metadata program, was a valuable tool that we no longer have at our disposal.”

CRUZ: The USA Freedom Act passed by Congress ended the federal government’s bulk collection of telephone metadata for all Americans, and “strengthened the tools of national security and law enforcement to go after terrorists.”

THE FACTS: Both are right, but are emphasizing different aspects of the new law. While the government has lost speed and ability to reach back in time, it has gained volume of coverage.

The controversial NSA surveillance program revealed by leaker Edward Snowden had allowed the intelligence community to quickly analyze five years of calling records in search of connections among Americans and foreign terror suspects.

Under the new law, the government can no longer collect and store calling data. Instead, it has to request a search of data held by the phone companies, which typically hold the records for two years. It’s unclear how quickly those searches can take place, but it’s probably longer than in the previous system. Rubio is correct in this regard.

Cruz is correct that under the prior program, a large segment of mobile phone records went uncollected. Under the new regime, a larger universe of phone records can be searched.

What neither acknowledged is that the phone records program was not regarded inside NSA as an important tool in ferreting out terrorism plots. The only case the government has said was cracked because of the program over a decade was a relatively minor terrorist financing scheme.

AP writers Alicia A. Caldwell and Ken Dilanian contributed to this report.