Editor’s note: The Associated Press will look at political claims that take shortcuts with the facts or don’t tell the full story in tonight’s PBS NewsHour Democratic Debate from Milwaukee.

WASHINGTON — Eager to share Bernie Sanders’s claim to the grass roots, Hillary Clinton is having trouble owning up to the deep pockets helping her campaign. For his part, Sanders is struggling to make a convincing case that the numbers add up in his hugely expensive health plan.

A look at some of the claims in the latest Democratic presidential debate and how they compare with the facts:

CLINTON: “I’m very proud of the fact that we have more than 750,000 donors, and the vast majority of them are giving small contributions. … We both have a lot of small donors.”

THE FACTS: Clinton is trying to obscure her reliance on big-money donors by emphasizing those who give smaller amounts. The majority of Clinton’s money comes from big donors.

Clinton’s presidential run is being supported by wealthy donors in ways that Sanders’ is not. Last year’s fundraising reports show that Sanders raised fully 72 percent of his campaign money from people who gave $200 or less, while for Clinton those donors accounted for just 16 percent of her funds.

Clinton stretched when putting herself in Sanders’ league when it comes to grassroots financing. She said they are both getting small donors and that “sets us apart” from Republican candidates. But her rate of small-dollar contributions isn’t that much different than that of some of the GOP contenders.

She also minimized the impact of the super political action committee supporting her effort, saying the group was founded to help President Barack Obama and that she has no say over its operations. But no candidate can control the super PACS that are devoted to helping their candidacies, yet they can be vital in White House efforts because they can raise unlimited money and spend heavily on advertising and other help.

Although Priorities USA may have formed to help Obama, it’s now steered by her trusted advisers. In fact, Guy Cecil, a former Clinton staffer, was brought in to lead the group last year as a signal to her supporters that they could trust Priorities USA to serve her well. 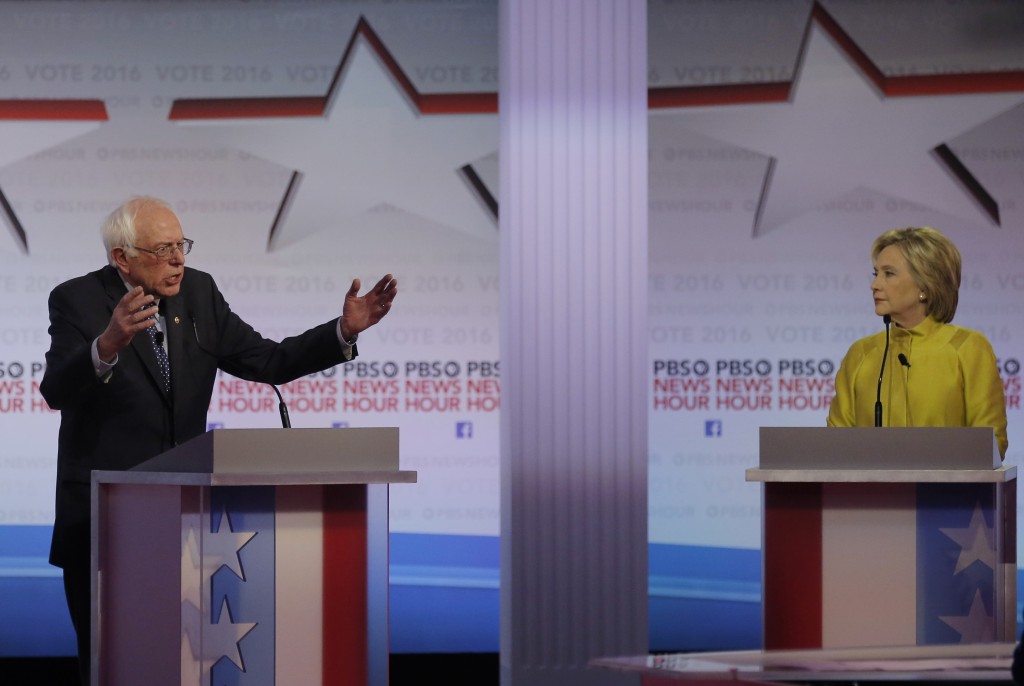 SANDERS: “Our Medicare-for-all, single-payer proposal will save the average middle-class family $5,000 a year.”

CLINTON: “The numbers don’t add up.”

THE FACTS: Two early assessments suggest that his accounting comes up short, although more detail and analysis are needed on Sanders’ plan for cradle-to-grave, government-financed health care for all.

The nonpartisan Committee for a Responsible Federal Budget estimates that the tax increases in Sanders’ plan would cover only about 75 percent of what Sanders says it will cost, creating a $3 trillion hole in the federal budget over 10 years.

Emory University economist Kenneth Thorpe says the proposal also underestimates the cost of having the government provide doctors’ services, hospitalization, long-term care, and vision and dental care — all without premiums, copays or deductibles.

According to Thorpe, the Sanders plan falls short by about $11 trillion over 10 years. He says the income and payroll tax increases required to pay fully for the proposal would mean 71 percent of those who now have private insurance would pay more.

Thorpe served in the administration of Bill Clinton, handling economic estimates of the former president’s failed health care overhaul plan. He says he has no involvement with the Hillary Clinton campaign.

CLINTON: “Americans haven’t had a raise in 15 years.”

THE FACTS: She is essentially right.

According to the Census Bureau, median household incomes peaked in 1999 and have been lower in every year since that time. Adjusting for inflation, median household incomes stood at $53,657 in 2014, 7.2 percent lower than the peak level of $57,843 in 1999. Even by another, less complete measure, she’s still in the ballpark. According to the Bureau of Labor Statistics, real wages have gone up 7.5 percent over 15 years — an annual growth rate of 0.5 percent, meaning close to stagnation.

SANDERS: “A male, African-American baby born today stands a one-in-four chance of ending up in jail. That is beyond unspeakable.”

THE FACTS: Sanders exaggerated the rate of incarceration for black males, as Clinton did in an earlier debate.

A 2003 report from the Bureau of Justice Statistics said, “About 1 in 3 black males, 1 in 6 Hispanic males, and 1 in 17 white males are expected to go to prison during their lifetime, if current incarceration rates remain unchanged.” But that was only a projection. The report went on to say that at the time, 16.6 percent of adult black males had actually ever gone to prison, or 1 in 6.

Since then, the incarceration rate for black men has actually gone down instead of up, according to the Sentencing Project.

CLINTON: “The Affordable Care Act has helped more African-Americans than any other group to get insurance.”

THE FACTS: Actually, more Hispanics have gained coverage, according to the administration’s data, though the rate of black uninsured has dropped the most — by half.

By comparison, the rate for whites, 14.3 percent uninsured in 2013, came down by 6 percentage points, adding 7.4 million under the insurance umbrella.

SANDERS on the North American Free Trade Agreement, normalized trade relations with China and other trade liberalization: “Those trade policies have enabled corporate America to shut down in this country, throw millions of people out on the street.”

THE FACTS: That’s an oversimplified reading of America’s manufacturing decline. Since NAFTA took effect in 1994, the U.S. has lost 4.5 million manufacturing jobs. But it is not easy to assign blame. In a report last year, the Congressional Research Service concluded that NAFTA’s effect on the nation’s economy “appears to have been relatively small.”

Technology probably plays a bigger role in job destruction: Robots and other machines allow companies to produce more with fewer workers. Economists generally believe that trade has a bigger impact on the composition of the workforce than on the level of jobs. And on that point, economists do find that the lost manufacturing jobs generally paid higher wages than many of the service sector jobs that have replaced them.