A growing number of women running for office in 2018 are making opposition to sexual harassment and assault part of their campaigns. Yet the issue doesn’t seem to be a priority for many voters, despite the momentum behind the #MeToo movement.

A recent poll from the Barbara Lee Family Foundation shows that 51 percent of voters said they would never vote for someone who did not make addressing sexual harassment a priority. Sexual assault victim advocates say that represents progress. But the number of voters who prioritize the issue remains relatively low, especially at a time when people and companies are under renewed scrutiny over how they handle sexual misconduct, in their own lives and in the workplace.

A CNN poll earlier this year found that sexual assault ranks far below the economy, gun policy, immigration, health care, and taxes, among other issues, when it comes what voters care most about.

Answers to these questions are hard to come by, especially because there is relatively little data on how voters view sexual harassment as a campaign issue. Most polls do not include it in the predetermined list of issues voters are asked to rank, but it’s something with which candidates are struggling as they decide how much to focus on sexual harassment in the 2018 midterms.

Already, some candidates have already shifting their focus to other “pocketbook” issues.

Already, some candidates have started shifting their focus to other “pocketbook” issues as the general election nears, apparently concerned that speaking out consistently on sexual harassment is too big of a political gamble.

“It’s risky as a single issue focus,” said Ellen Fitzpatrick, a history professor at the University of New Hampshire who focuses on the intersection of American politics and gender. “It’s just very hard to predict how it’s going to play out. To make that a primary issue, I do not think will engage a broad spectrum of voters, at least not broad enough in close races.”

Gretchen Whitmer, a Democratic Michigan state senator running for governor, is no stranger to addressing sexual assault. Whitmer was a prosecutor in the county that includes Michigan State University during the scandal and investigation into Larry Nassar, a sports medicine doctor who abused hundreds of athletes, including a number of U.S. Olympic gymnasts. In 2013, she took to the state senate floor to share her own story of being raped as a college student.

“Fifty-one percent of our population is female, and dads, just like moms, want to know that their daughters are going to be safe on campuses,” Whitmer said in an interview.

Even still, Whitmer is not hanging her entire campaign on policies addressing sexual assault.

“What I tend to focus on is the dinner table issues: fixing the roads, making sure everyone has a path to a high wage job, cleaning up our drinking water,” she said. 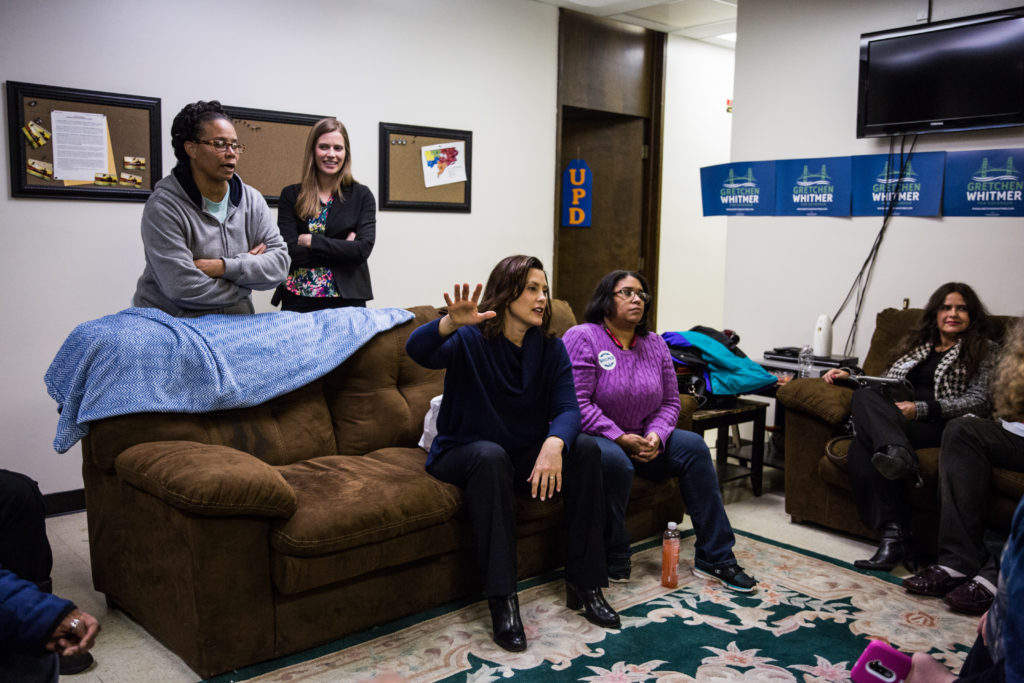 Democrat Gretchen Whitmer (third from left), who is running for governor in Michigan, has addressed sexual harassment as a candidate. But she said her campaign is focused on “dinner table issues.” (Photo by Ali Lapetina for The Washington Post via Getty Images)

Political strategists said every part of the country is different, so candidates need to have their finger on the pulse of voters in their particular district. Focusing on sexual harassment may work better in some races than others.

“If you are in a progressive district, I think it’s advantageous to run on this issue. It can be a winning strategy,” said Melissa Deckman, the chair of the political science department at Washington College.

Talking about sexual assault might not necessarily hurt a candidate in a red-leaning district, Deckman said, “but those voters are going to care more about immigration, national security and health care.”

The debate over sexual harassment and assault could still impact the midterms, even if it gets less attention than the economy, immigration and other matters.

For starters, millennials appear focused on the issue. And while they tend not to vote in midterm elections — only 22 percent of millennials voted in 2014 — that could change this year.

“This issue has the potential to energize and activate that group to send them to the polls,” said Amanda Hunter, a Barbara Lee Foundation spokesperson.

Among millennial women, 63 percent said they would never vote for someone who did not make addressing sexual harassment a priority, according to the foundation’s polling, a greater percentage than the general population.

The debate over sexual harassment and assault could still impact the midterms, even if it gets less attention than the economy, immigration and other matters.

Mary Barzee Flores, a Democrat running for Congress in Florida, introduced herself to voters in November with a video called “Power Trip.” In it, she described the harassment she experienced throughout her life, including being assaulted by her boss. Flores, a former judge, remains an underdog in her race against incumbent Republican Rep. Mario Diaz-Balart, but the approach has helped her campaign gain traction.

Polling from the Barbara Lee Family Foundation shows that having specific policy proposals to address sexual assault is more important than candidates sharing their own #MeToo story. But these kinds of personal videos that tell candidates’ stories of sexual assault, racial discrimination or the struggles of being a teacher or a mother are still resonating with voters, said Debbie Walsh, the director of the Center for American Women and Politics at Rutgers University.

“Being authentic gives people something to connect to. It makes that candidate a real person,” she said. “Then you believe as a voter that they aren’t just talking about issues, they have lived these issues.”

That connection with voters can boost enthusiasm, which translates to more name recognition, an increase in campaign volunteers and a spike in financial donations.

MJ Hegar, a Democrat and Air Force combat veteran running for Congress in Texas, raised $1.1 million in a single quarter after a campaign ad focusing on how she persevered despite being the subject of gender discrimination went viral.

Republican women are largely focusing their campaigns on more traditional issues, in part because addressing sexual misconduct has not been a prominent issue for the GOP in the past.

But some Republican candidates have weighed in on the issue.

Rep. Martha McSally, R-Ariz., told The Wall Street Journal she was sexually assaulted by a coach in high school. 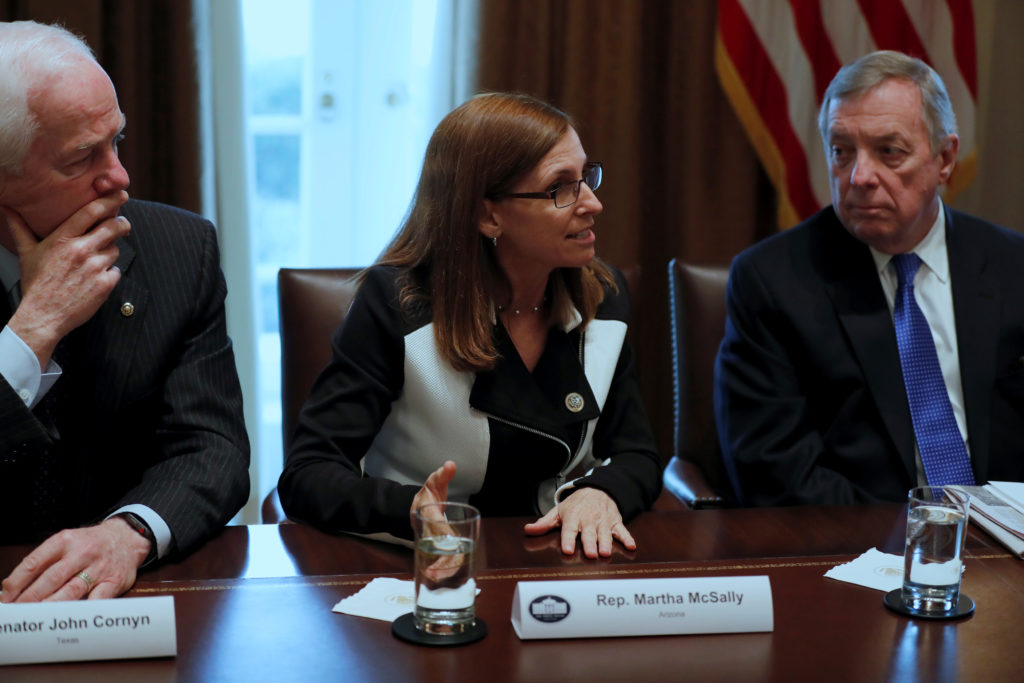 Rep. Martha McSally, R-Ariz., has spoken out about sexual assault. But many Republican lawmakers and candidates have not been as vocal on the issue as Democrats. Photo by Jonathan Ernst/Reuters

It is difficult for women from both parties, but perhaps especially for Republicans, to talk about addressing sexual harassment without at least alluding to Trump, who has been accused by several women of sexual misconduct. The issue has created a dilemma for GOP candidates who want to weigh in but may not out of fear of angering the president. Republicans who have been vocal critics of Trump, including after the “Access Hollywood” tape was released in the last weeks of the 2016 election, have often faced a backlash from the president or his supporters.

“If you are a Republican candidate, it’s a tough year,” said Jennifer Pierotti Lim, the co-founder of Republican Women for Progress. “Democratic women are much more empowered by their base and by their party when they talk about sexual assault.”

‘By the time the November election comes, I don’t think [sexual harassment] will be the number one for everybody anymore.’

That could be a blessing in disguise for GOP candidates. Republicans have not been expected to broach sexual assault, making it in theory easier for them than for Democrats to focus on pocketbook issues that often matter more to voters come Election Day.

“By the time the November election comes, I don’t think [sexual harassment] will be the number one for everybody anymore,” Lim said.

The risk of backlash

This year, more than 20 lawmakers who have been accused of sexual assault are running for re-election. The situation has forced their opponents to decide whether to address the issue or leave it alone. Many have chosen to keep quiet, fearing that calling out their opponent’s behavior could backfire.

There are risks that come along with speaking about your own experience, too. Whitmer, the Democrat running for governor in Michigan, said online trolls have suggested she is using her experience of sexual assault for political gain.

“I never wanted to be known as the survivor [of sexual assault], but it is a part of who I am,” Whitmer said.

Anna Eskamani, a Democrat running for a Republican-held Florida state house seat, has repeatedly talked about being harassed by a male supervisor and has made addressing sexual assault part of her campaign platform. In an interview Eskamani said that she has has been accused of having extramarital affairs and was the subject of a pornographic text message.

But Eskamani said she wasn’t deterred. “To some degree, backlash is a sign that change is really coming.”

Left: Florida State House candidate Anna Eskamani (second from right) speaks at a forum on the #MeToo movement Washington, D.C. on July 24, 2018. A growing number of candidates including Eskamani have made addressing sexual harassment a key part of their campaigns. (Photo by Alex Wong/Getty Images)