Few, if any, minority senior execs in Trump’s empire

WASHINGTON — There are few, if any, black executives in the upper ranks of the Trump Organization, a review by The Associated Press has found. Other minorities are also scarce at that level though Republican presidential nominee Donald Trump has employed scores of executives.

Former executives say they cannot recall a single black vice president-level executive at Trump’s headquarters during their combined tenures at the Trump Organization LLC, which ranged from 1980 to late in the past decade. Reviews of social media postings by Trump and his family and Trump’s acknowledgements thanking executives in his books also fail to identify any senior black employees past or present.

Asked about the lack of African-American vice presidents in an interview last month, Trump assured the AP that he had hired minorities as senior executives and said his staff could readily provide specific details.

“I am the least discriminatory person in the world,” Trump said. “I have people that do the hiring, if you want to speak to them.”

The Trump Organization, however, did not grant subsequent requests by the AP to provide such information or say whether Trump had hired an African-American vice president over the past 35 years.

The AP limited its review to the circle of senior executives who hold titles of vice president or higher within the Trump Organization, an amorphous corporate entity in which Trump and a group of top executives oversee hundreds of different companies and partnerships that control real estate, licensing and hospitality businesses. Some subsidiary businesses have their own hierarchies of presidents and vice presidents, but those executives are generally not located within Trump Tower headquarters and do not have the same authority and prestige.

Trump’s subsidiary businesses over the years have included golf courses, a modeling agency, casinos in multiple states and an airline. The AP did identify some African-Americans holding the VP title at such individual properties. “The Trump Organization employs both females and minorities in positions of authority across the entire company and in recent years has made great progress in expanding an already diverse workforce,” Trump’s son, Eric, said in a statement to the AP. “As the company continues to expand, both domestically and internationally, we will continue to recruit the very best and brightest regardless of gender and ethnicity.”

The AP’s review found two Trump executives whose surnames could potentially indicate Hispanic or Middle Eastern backgrounds but did not draw any conclusions given the lack of cooperation by the Trump Organization.

Some black former employees said the absence of minorities among Trump’s top lieutenants was striking.

“It was quite commonplace for me to be the only person of color in the room for meetings at the executive level,” said Randal Pinkett, who in December 2005 won on “The Apprentice,” Trump’s reality show competition. That earned Pinkett a temporary vice president title within Trump Entertainment Resorts Inc., not the Trump Organization directly.

“And when I had the opportunity to meet with the heads of affiliate companies, as I did often, not once did I encounter a person of color,” Pinkett said. 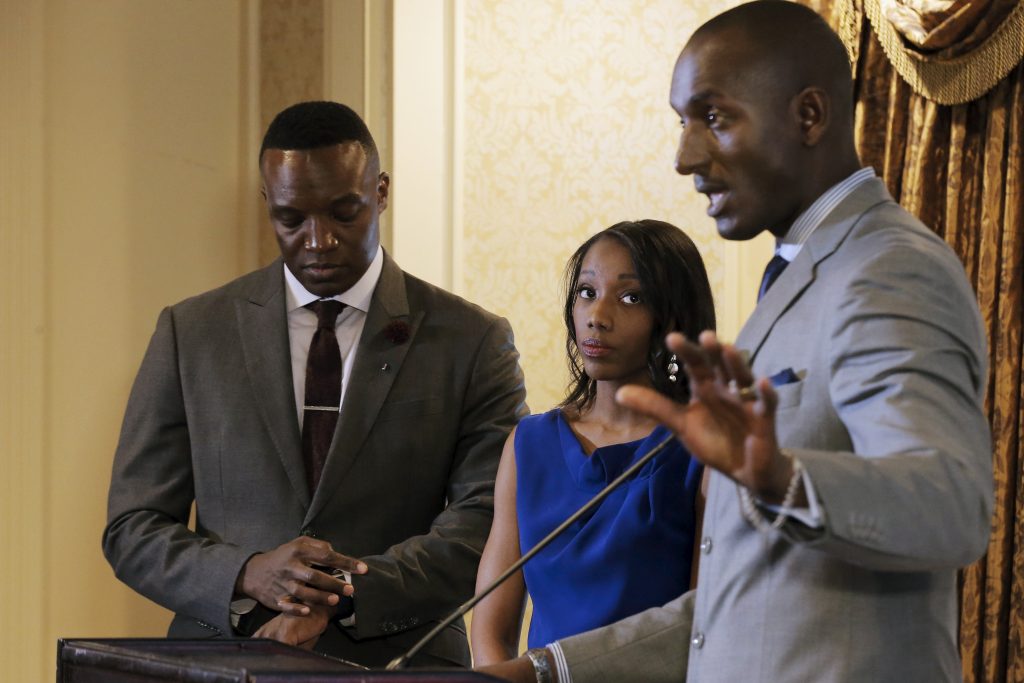 The apparent lack of diversity among Trump’s senior staff undermines an image portrayed in a recent online campaign advertisement, in which Lynne Patton, who described herself as a black, female executive at the Trump Organization, praised Trump for “hiring more minority and female executives than any other company for which I’ve ever worked.”

Patton is Eric Trump’s longtime personal assistant. After the AP questioned the campaign’s citation of her as a Trump Organization executive, her title on the Eric Trump Foundation’s website and her profile on the LinkedIn service was changed to “vice president of the Eric Trump Foundation.” That position did not appear on the foundation’s most recent tax filing for 2014, which said Patton was one of 16 unpaid directors who devote approximately one hour per week to the charity. Paige Scardigli, the executive director of the Eric Trump Foundation, said that those filings understated Patton’s role. Patton did not respond to inquiries from the AP through email, a message to her LinkedIn account and requests to a spokeswoman for the Trump Organization.

The National Urban League said Trump did not reply to a questionnaire about diversity and he has twice rebuffed requests to speak or meet with the group and the NAACP.

The president of the National Urban League, Marc Morial, called Trump’s claim to colorblindness “a smoke-screen” and said it was a worrisome sign of how the businessman would handle appointments as president.

“There are lots of African-American graduates from Wharton and Harvard and Yale,” Morial said. “If you were applying the same standard to everyone in the talent pool, you’d be hiring a lot of people of color.”

When Trump takes fire for comments about women, he can point to a roster of female executives who held senior positions, reporting only to him. On matters of racial diversity, however, Trump does not have that option.

The AP spoke with six former Trump executives. Some spoke on condition of anonymity because they said they were concerned about retaliation by Trump.

“There weren’t many black employees at all that I remember, to be honest with you,” said Barbara Res, who worked for Trump from 1980 to 1992. “I know he had a black doorman, which is a big thing for him — that’s the front of his building.”

Trump has dismissed comments by Res about other matters involving the Trump Organization, calling her a disgruntled former employee whom he declined to rehire.

“I don’t think it’s different from any other real estate company, honestly,” said Jill Cremer, a vice president at the Trump Organization until 2008. Cremer described a respectful, family-friendly environment during her decade with the Trump Organization. Even if the organization’s top executives were white, she said, Trump’s willingness to promote women to senior positions demonstrates his open mind about diversity.

Bruce LeVell, a black former county GOP chairman in Georgia who founded The National Diversity Coalition For Trump and says he has met most of the Trump Organization’s top executives, said he sees no sign of discrimination in Trump’s 25th floor office in Trump Tower. LeVell described diversity in the organization’s information technology department.

Trump, he said, does not care “if you’re black, small, white or tall. If you’ve got a gift and a talent, he’s going to go after you.”

In his social life, Trump has long had a place for African-American celebrities and athletes. His relationship with Herschel Walker went well past Walker’s star role on the New Jersey Generals, Trump’s team in an upstart football league. He called Michael Jackson a good friend, provided financial advice to Mike Tyson and in more recent years socialized with Russell Simmons.

Diversity questions come as Trump tests his appeal beyond the generally white and male voters that dominate Republican primaries. Most polls have pegged his likely support among blacks below 10 percent, in line with 2012 Republican nominee Mitt Romney’s performance. Trump campaign officials say they expect to do far better.

The campaign has put effort into diversity among its officials and surrogates. Its official national spokeswoman, Katrina Pierson, is an African-American woman; another black “Apprentice” contestant, Omarosa Manigault-Stallworth, has been a regular television surrogate for Trump. Trump also has been endorsed by a group of African-American pastors.

But Paul Manafort, a top campaign official, told the Huffington Post in an interview last month that picking a woman or a minority as Trump’s vice presidential nominee “would be viewed as pandering, I think.”