Where do you fit? The 2016 Political Party Quiz 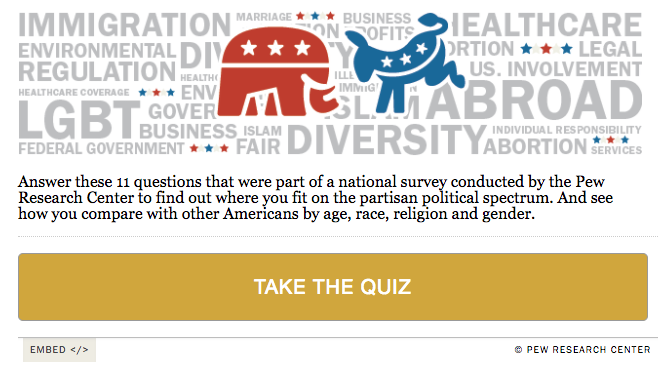 The 2016 U.S. presidential election is shaping up to be one of the most divisive contests in recent memory. To better understand where you land on the political spectrum, take our updated Political Party Quiz, developed by Pew Research Center in collaboration with the PBS NewsHour.

What does Donald Trump believe? Where the candidate stands on 10 issues

What does Hillary Clinton believe? Where the candidate stands on 12 issues

Questions gauge political values and an individual’s stance on policies and range from government spending to gay marriage. Your score shows your likelihood of being Republican or Democrat and is based on a Pew March 2016 political survey.

Nationally, the race between Donald Trump and Hillary Clinton is getting closer; an average of polls show Clinton’s post-convention bounce is over. Lisa Desjardins examines both candidates’ polling strengths and Carroll Doherty of the Pew Research Center and The Washington Post’s Dan Balz join Judy Woodruff for a breakdown of the electorate and how the candidates can drive home their messages.