For Holder, ‘Smart’ is the New ‘Tough’ on Crime

WASHINGTON — With the U.S. facing massive overcrowding in its prisons, Attorney General Eric Holder is calling for major changes to the nation’s criminal justice system that would scale back the use of harsh sentences for certain drug-related crimes. 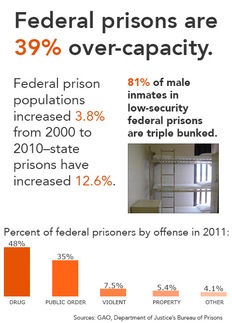 GRAPHIC: Federal Prisions Are Over Capacity

In remarks prepared for delivery to the American Bar Association in San Francisco, Holder also favors diverting people convicted of low-level offenses to drug treatment and community service programs and expanding a prison program to allow for release of some elderly, non-violent offenders.

“We need to ensure that incarceration is used to punish, deter and rehabilitate — not merely to convict, warehouse and forget,” Holder says in the speech he’s scheduled to deliver Monday.

In one important change, the attorney general is altering Justice Department policy so that low-level, non-violent drug offenders with no ties to large-scale organizations, gangs or cartels won’t be charged with offenses that impose mandatory minimum sentences. Mandatory minimum prison sentences, a product of the government’s war on drugs in the 1980s, limit the discretion of judges to impose shorter prison sentences.

Under the altered policy, the attorney general said defendants will instead be charged with offenses for which accompanying sentences “are better suited to their individual conduct, rather than excessive prison terms more appropriate for violent criminals or drug kingpins.”

Federal prisons are operating at nearly 40 percent above capacity and hold more than 219,000 inmates — with almost half of them serving time for drug-related crimes and many of them with substance use disorders. In addition, 9 million to 10 million prisoners go through local jails each year. Holder praised state and local law enforcement officials for already instituting some of the types of changes Holder says must be made at the federal level.

Aggressive enforcement of federal criminal laws is necessary, but “we cannot simply prosecute or incarcerate our way to becoming a safer nation,” Holder said. “Today, a vicious cycle of poverty, criminality and incarceration traps too many Americans and weakens too many communities. However, many aspects of our criminal justice system may actually exacerbate this problem, rather than alleviate it.”

Holder said mandatory minimum sentences “breed disrespect for the system. When applied indiscriminately, they do not serve public safety. They have had a disabling effect on communities. And they are ultimately counterproductive.”

Holder said new approaches — which he is calling the “Smart On Crime” initiative — are the result of a Justice Department review he launched early this year.

The attorney general said some issues are best handled at the state or local level and said he has directed federal prosecutors across the country to develop locally tailored guidelines for determining when federal charges should be filed, and when they should not.

“By targeting the most serious offenses, prosecuting the most dangerous criminals, directing assistance to crime `hot spots,’ and pursuing new ways to promote public safety, deterrence, efficiency and fairness – we can become both smarter and tougher on crime,” Holder said.

The attorney general said 17 states have directed money away from prison construction and toward programs and services such as treatment and supervision that are designed to reduce the problem of repeat offenders.

In Kentucky, legislation has reserved prison beds for the most serious offenders and refocused resources on community supervision. The state, Holder said, is projected to reduce its prison population by more than 3,000 over the next 10 years, saving more than $400 million.

He also cited investments in drug treatment in Texas for non-violent offenders and changes to parole policies which he said brought about a reduction in the prison population of more than 5,000 inmates last year. He said similar efforts helped Arkansas reduce its prison population by more than 1,400. He also pointed to Georgia, North Carolina, Ohio, Pennsylvania and Hawaii as states that have improved public safety while preserving limited resources.

Holder also said the department is expanding a policy for considering compassionate release for inmates facing extraordinary or compelling circumstances, and who pose no threat to the public. He said the expansion will include elderly inmates who did not commit violent crimes and who have served significant portions of their sentences.