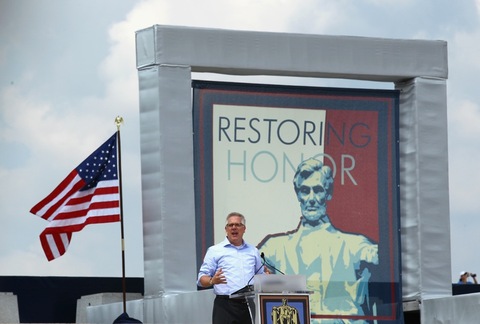 Glenn Beck had a good Saturday. Depending on whose crowd estimate you want to believe — always a tricky game — somewhere between 87,000 and 500,000 people came to the National Mall for the TV and radio personality’s “Restoring Honor” rally.

For many political analysts, the rally was seen as a measure of how powerful the tea party movement has become as the November elections approach. It’s tempting to view the rally that way. It was out in the open and received major media coverage.

But the meaning for the tea party is less clear. The Saturday rally did less to show the power of the tea party movement than it did to show the problems it faces and the tensions within the movement itself. Patchwork Nation has highlighted some of these differences in the past few months, and we saw them on display during the weekend.

What’s It All About?

As many have noted, the tea party is not so much a coherent movement as it is a collection of small, local groups organized around frustration with the government. But beyond that frustration, the specific issues that push the groups forward are a disparate collection of items.

Beck’s rally specifically — and his branch of tea party-ism more broadly — have strong and important religious forces. That religious foundation was on full display Saturday. “Something that is beyond man is happening,” Beck said to the assembled crowd. “America today begins to turn back to God.”

Yet the mission statements for FreedomWorks or Tea Party Patriots — two major tea party groups — do not once use the word God. (The Tea Party Patriots’ website uses “Creator” in citing the Constitution’s verbiage). Those groups are not about an American return to faith; they are about fiscal responsibility and limited government.

That doesn’t mean those organizations ignore Beck and his followers. In fact, Beck’s army is actively courted. But how much does the loose confederation of tea party groups follow Beck’s sentiments?

See the Whole Through the Parts

The answer to that question depends on which tea party group you are talking about. Look at the website for the Springfield, Mo., tea party, which sometimes meets in nearby Nixa, an Evangelical Epicenter in Patchwork Nation. You will see Beck’s vision of the tea party alive and well. The second of the nine principles listed prominently on the group’s website is “I believe in God and He is the Center of my Life.”

In Phoenix, an Immigration Nation community, the website for the East Valley Tea Party does not feature the word God at all — even on its mission page.

In Billings, Mont., a Service Worker Center in Patchwork Nation, the tea party group is called Montana Shrugged, a salute to author Ayn Rand, an avowed atheist. And as one might expect, there are no mentions of God anywhere. As sons and daughters of the Bitterroot Mountains, Montana Shrugged’s members are much more concerned with freedom and independence from big government.

All these differences are precisely what makes it so hard to get a read on what difference the tea party will make this fall and beyond. When you get past the idea of reducing government spending or simply shrinking government as a whole, there are not a lot of common threads in the multifaceted, multidirectional tea party movement.

What happens if tea party candidates do well in November? That is anyone’s guess. What would its agenda look like? Would it be Beck’s tea party movement, which clearly has some resonance with the Christian right? Would it be the more libertarian elements of the loosely defined movement? What happens to one part of the movement if it feels its areas of concern are getting the short shift?

That’s why, despite the desires of political analysts everywhere, it is hard to draw larger meaning from this weekend’s event on the Mall.

Beck had a good Saturday. But the tea party movement? Its size, shape and potential impact on the November elections are as unclear as ever.