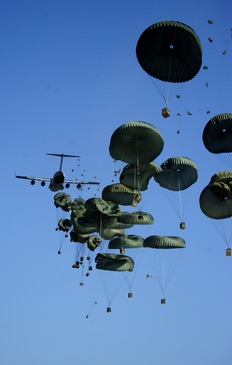 When asked in a recent poll how much the U.S. government spends on foreign aid, Americans vastly overestimated the amount — which might explain why politicians look to that area first when considering budget cuts, some analysts say.

The survey, conducted by the WorldPublicOpinion.org project at the University of Maryland’s Program on International Policy Attitudes, asked the question: “What percentage of the federal budget goes to foreign aid?”

The median answer was roughly 25 percent, according to the poll of 848 Americans. In reality, about 1 percent of the budget is allotted to foreign aid.

“The primary reason for this (disparity) is the sense of ongoing involvement in Iraq, Afghanistan and the war on terror, including in Pakistan. We also have been engaged in Haiti,” said Clay Ramsay, director of research at PIPA. “The number of things Americans hear about regularly are manifold. They assume there is some really immense foreign assistance effort, which of course is not true.”

Instead, it seems the line between foreign aid and foreign defense spending is being blurred. As David Kilcullen explains in his new book, “The Accidental Gorilla”, there is an asymmetry in what he calls “the mismatch between military and non-military elements of U.S. national power.”

Ramsay agrees. “People are looking at the whole footprint,” he said.

The actual investment, when broken down, reveals that foreign aid is a small portion of the discretionary budget. “In other words, the Department of Defense is about 210 (times) larger than USAID and State combined, in personnel terms,” Kilcullen writes. “In budgetary terms, the mismatch is far greater, on the order of 350:1.”

The respondents also said they thought about 10 percent should go to foreign aid. “There is on the one hand an underlying perception that America’s contribution in the world is greater than it really is, but it also shows a willingness to make a significant contribution,” Ramsay said.

The study emerges on the heels of the bipartisan fiscal commission’s efforts to grapple with the federal budget deficit. The Simpson-Bowles budget plan included a directive to “slow the growth of foreign aid” by 4.6 percent.

“Foreign aid is clearly on the chopping block these days,” says James Lindsay, director of studies at the Council on Foreign Relations. “The public’s inflated sense of foreign aid spending helps explain why so many politicians are quick to volunteer aid programs for the budget axe.”