Calls for belt tightening and budget slashing abound on Capitol Hill as members of Congress debate not one but two contentious spending measures — government spending for the remainder of financial year 2011 and the president’s budget proposal for 2012.

When Republicans took control of the House in January, foreign aid was among the areas considered for cuts in their 2011 budget proposal. The plan, which was rejected Wednesday by the Senate but has set the table for the debate, aimed to cut the State Department budget by 16 percent and the money available for foreign humanitarian programs by 41 percent, according to Secretary of State Hillary Clinton.

The size of the proposed cuts sent alarm bells through the State Department.

“Cuts of this magnitude will be devastating to our national security, will render us unable to respond to unanticipated disasters and will damage our leadership around the world,” Clinton said in a letter to Republican representatives in February.

But amid a new climate of spending austerity, many members of Congress say money has to be prioritized and tough choices have to be made. And it appears many Americans agree. According to a USA Today/Gallup poll taken in January that found a majority of respondents — 59 percent — favor cuts to foreign aid.

Polls also show that many people overestimate the portion of the budget that goes to foreign aid, according to a survey released last month by the Program for Public Consultation, a joint program of the Center on Policy Attitudes and the School of Public Policy at the University of Maryland.

Federal funding for foreign aid made up one percent of the budget in FY 2010, according to U.S. government statistics. But when asked in the Program for Public Consultation survey to estimate how much of the federal budget goes to foreign aid, the average estimate by participants was 21 percent. The average response for how much would be “appropriate” was 10 percent.

See the below graphic for more on how much the U.S. spends on foreign aid and how we compare to other developed countries: 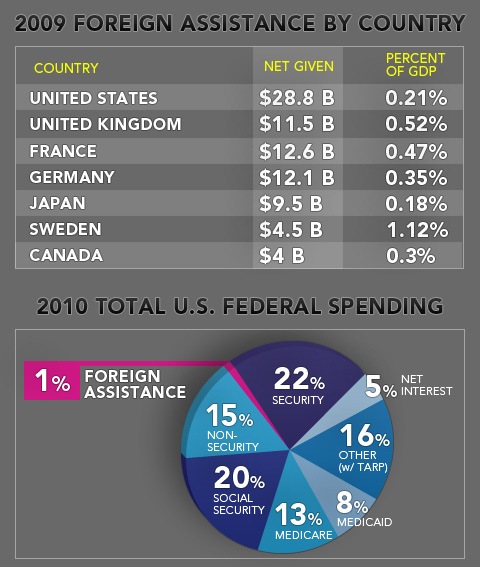 Decisions on funding for the remainder of this year and on next year’s budget could determine the fate of some foreign aid programs, and all indications are that Republicans may push for even deeper cuts in 2012.

“This is a new era and I applaud [House Appropriations Chairman Hal Rogers] for … setting the tone as we move into the FY 2012 appropriations cycle when the cuts will go even deeper,” Rep. Kay Granger, head of the House subcommittee handling foreign aid, said in statement reacting to the continuing resolution proposal. Granger called the proposed reductions to her section of the bill “a good start.”

For his part, President Obama’s proposed FY 2012 budget does roll back aid to some countries, but lays out an increased investment overall for the State Department and the administration’s Global Health Initiative priorities. In the proposal, the State Department is allocated $47 billion, not including $8.7 billion for operations in certain countries like Iraq and Afghanistan.