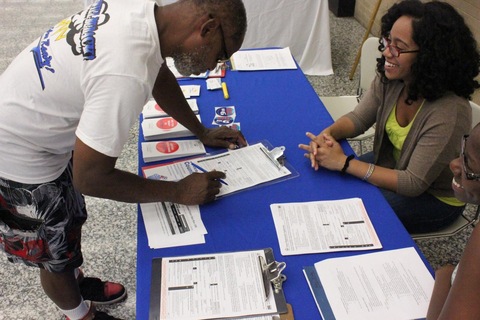 On a Saturday afternoon earlier this month, about a dozen college students from George Washington University fanned out across the parks and plazas of downtown Washington, D.C., with stacks of voter registration forms and informational pamphlets — not really an uncommon sight in an election year. But they weren’t supporting a specific candidate or trying to turn out the vote amongst fellow young people. Instead they were targeting a specific group of voters who, for the most part, are entirely overlooked: the homeless.

The afternoon of canvassing was part of a larger effort organized by the National Coalition for the Homeless to help D.C. residents living on the streets or in shelters register to vote in the run-up to the November election. The non-profit advocacy group also organized a weekend-long voter drive at the city’s main library branch and provided support to similar efforts in other U.S. cities. The goal, organizers said, was to spread awareness that you don’t need an address to cast a ballot.

Statistics on homelessness in the United States are tough to calculate. For many it’s a temporary condition, and and it’s difficult to count those living on the street. But National Coalition for the Homeless Executive Director Neil Donovan told the NewsHour that an estimated 700,000 people are unhoused in the U.S. on any given day. Over the course of a year, about 3.5 million Americans will spend some time without housing. Of those roughly 700,000 people who will be homeless on Election Day, Donovan said that approximately 70 percent would be eligible to vote, while about one in 10 would be registered and actually cast a ballot. Donovan said the figures disprove the common assumption that homeless people don’t vote at all.

For comparison, 225 million Americans voted in the 2008 presidential election.

Much like you might expect from any voting constituency, Donovan said that the homeless voters his group sees are usually most concerned with issues that affect them directly. “What we hear mostly from people is, ‘What’s their policy on homelessness?'” Donovan said. “People who are informed enough to have a conversation about it say,’You know, is this person committed to ending homelessness and are they willing to preserve the safety net for those who are either persistently poor or kind of stuck in the state of being unhoused?'”

Donovan said that homeless voters also tend to be keyed into local politics because issues raised in statehouses and city halls often have the greatest impact on their lives.

Over the course of the afternoon, students handed out about 15 registration forms and got five people to fill them out on the spot, but a surprising number of the homeless people they spoke to were already registered. The NCH estimates about a third of D.C.’s homeless are registered voters, three times the national average. The final tally for the weekend was 137 new registrants.

Sitting in a downtown Washington park, D.C. native Adele Wabash, in her early 50s, told a group of students she was already registered and plans to vote. Wabash, who recently found an apartment but has often struggled with homelessness, said she tends to pay the closest attention to local issues. But she was quick to express her opinions on the presidential race — she backs President Obama. The issues that concern her most are housing, jobs, and health care.

Wabash acknowledged that economic improvements are slower than she’d like to see but was optimistic that the president has put the country on the right track. “To me it’s gotten better,” she said. “A little bit at a time and there’s a whole lot to do.”

As for former Gov. Mitt Romney, Wabash was critical, questioning his ability to empathize with homeless and low-income voters given his wealth.

Figures on party affiliation among homeless voters were unavailable but Neil Donovan at the NCH pointed to the fact that the majority fall into two larger categories: minorities and the persistently poor, both of which are groups that historically favor Democrats. Of the few dozen homeless people that student volunteers spoke with, several expressed support for Mr. Obama and one said he favored Romney because of his stance on abortion.

But while it’s not surprising that voters who experience homelessness and extreme poverty might vote on things like welfare programs or access to health care — traditionally strong Democratic issues — Donovan said this inclination may also exacerbate the challenges potential homeless voters face on their way to the ballot box.

By far the biggest obstacle keeping more homeless people from voting, Donovan said, is a persistent lack of information. Despite court rulings making it clear that people have the right to vote whether or not they have an address, complex and frequently changing voting rules can discourage would-be homeless voters. And Donovan argues that instead of working to improve accessibility, partisan concerns often motivate state and local officials to keep things as opaque as possible.

“Regardless of whether or not the changes are in the best interest of the state or not, constant change for change’s sake is the modus operandi. Its intended purpose is to confuse and it’s doing that effectively,” Donovan said.

Access to the polls has been an especially relevant topic this election cycle with fights in several states over proposed voter ID laws. Supporters of the laws argue that requiring voters to show photo ID before casting a ballot will help prevent fraud, while opponents say the ID rules — almost exclusively proposed by Republican lawmakers — target specific, Democratic-leaning groups like the poor, ethnic minorities and the elderly who have the most difficulty providing the information and documentation the laws would require.

Neil Donovan said his organization worries voter ID laws would be especially problematic for homeless voters who might have a hard time producing a birth certificate or affording the fees needed to get a photo ID. But while Donovan sees voter ID laws as an attempt at suppression, he admitted that supporters probably aren’t targeting homeless voters specifically. “I don’t think they are even aware that homeless people vote to the extent that they do,” he said. “I think, frankly, they just don’t think about homeless people.”

Donovan said the result is that homeless people end up caught in a wider net that hampers the persistently poor who try to vote. With cases working their way through courts and more states proposing voter ID laws, the impact promises to stretch well beyond this November, but for now, the NCH and their volunteers are trying address the problem on the ground, one person at a time.