Editor’s note: This story on Mitt Romney’s Senate aspirations was originally published last month. The headline has been updated to reflect Romney’s announcement Friday that he will run for the seat of retiring Sen. Orrin Hatch, R-Utah.

During his first run for the White House, in a speech at a fundraiser in Los Angeles, Mitt Romney mused about the career prospects of vanquished presidential nominees. The former Massachusetts governor said he had “looked at what happens to anybody in this country who loses as the nominee of their party, who loses the general election.”

“They become a loser for life,” Romney continued, in a scene captured in the acclaimed Netflix documentary “Mitt.” As his audience broke into laughter, he added: “It’s over. Mike Dukakis, you know he can’t get a job mowing lawns.”

A decade later, Romney, who failed to win the 2008 Republican nomination and as the party’s candidate went on to lose the 2012 election, is now reportedly weighing a bid for a seat in the U.S. Senate.

So much for being a lifelong loser, or an unemployed mower of lawns.

The speculation surrounding Romney’s potential political comeback has focused on his uneasy relationship with President Donald Trump. If Romney, 70, were to enter and win the race for the seat of retiring Sen. Orrin Hatch, R-Utah, later this year, he would likely face pressure from mainstream Republicans to become the party’s chief anti-Trump voice in Congress.

It’s too early to tell whether Romney would embrace that role. First, he would have to announce his Senate candidacy, a decision most Republican insiders in Washington and Utah expect will come in the next few weeks.

But for now, one thing is clear: if Romney, who served a single term as governor, ran for the Senate, it would mark a first in modern U.S. history.

A number of presidential nominees have served in Congress while campaigning for the White House and then returned to Capitol Hill after losing their elections, including former Massachusetts Sen. John Kerry and most recently Sen. John McCain, R-Ariz.

But going all the way back to the nation’s founding, there are few cases like Romney’s, where a major party presidential nominee with no prior experience in Congress later ran for a seat in the House or Senate, according to several historians who were interviewed for this story.

“This is very unusual,” said Shirley Anne Warshaw, a presidential scholar at Gettysburg College. “I can’t think of any [similar situations] in the 20th century. There are certainly some in the early 1800s, before 1824. But nobody after that.” 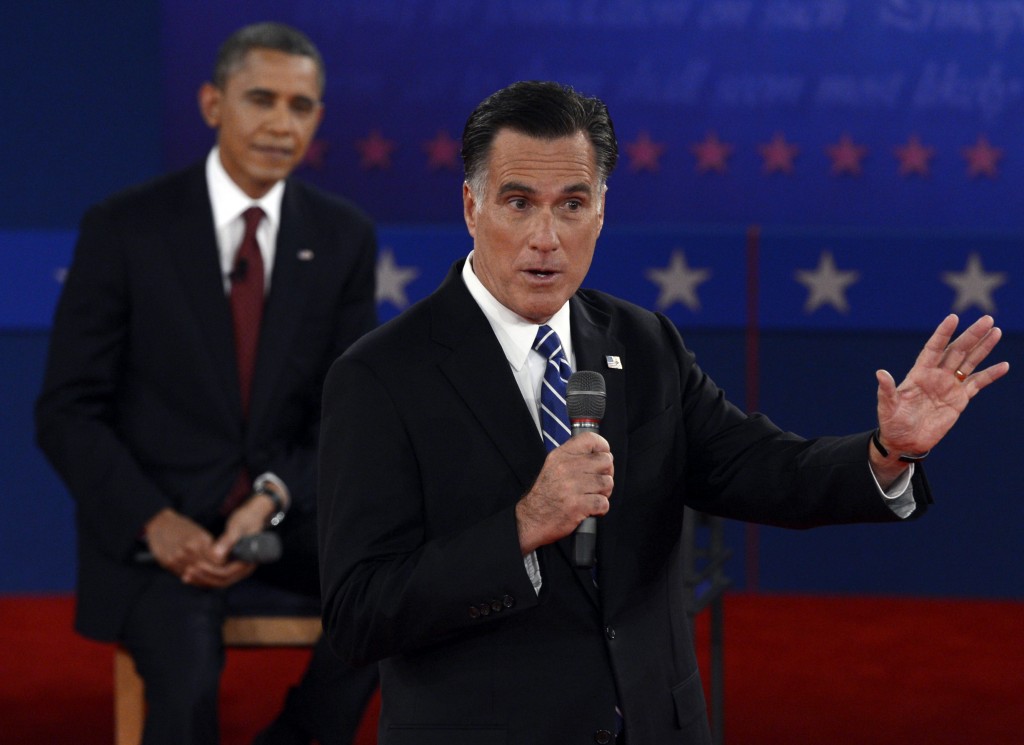 Mitt Romney speaks during the second presidential debate of the 2012 election, at Hofstra University in Hempstead, New York. Photo by TIMOTHY A. CLARY/AFP/Getty Images

Historians drew a parallel between Romney and John Quincy Adams, though Adams, unlike Romney, served in the Senate before becoming president in 1825. Still, Adams stands out among past presidents and presidential nominees because he ran for Congress after leaving the White House. Adams won a House seat in Massachusetts in 1830, one year after he lost a reelection bid to Andrew Jackson. He went on to serve in Congress for nearly two decades.

Charles Evans Hughes also had an unusual political career. He won the Republican presidential nomination in 1916, after serving as governor of New York and as an associate justice on the Supreme Court. Hughes lost to Woodrow Wilson in one of the closest presidential elections in U.S. history, but he later went on to serve as secretary of state and as the Supreme Court’s chief justice from 1930 to 1941.

Then there is Richard Nixon.

Nixon had already served in the House and as vice president when he lost the 1960 presidential election to John F. Kennedy. But instead of retiring from public life, Nixon ran for governor of his home state of California just two years later, and suffered another embarrassing defeat.

Following his 1962 gubernatorial loss, Nixon famously told a media gathering that “you don’t have Nixon to kick around anymore, because, gentlemen, this is is my last press conference.” Six years later, Nixon ran for president again.

“Nixon was addicted to the public sector. That’s where his career had been. I guess for some people it’s very difficult to put it behind them,” said Robert Dallek, a historian and presidential biographer. “Going and practicing law in a big law firm I think had very little appeal for him.”

So why have former presidents and defeated presidential nominees since Nixon not run for office again? The reasons are actually fairly simple, Dallek argued. By that point in their careers, most would-be candidates have reached or are nearing retirement age, and don’t have the same passion for mounting a new campaign.

If Romney ran for a seat in the House or Senate, it would mark a first in modern U.S. history.

“Usually most of them are pretty old by the time they leave the presidency” or lose a national race, Dallek said. “They’ve been through such an arduous campaign, and they’re not eager to take on another combative run for office.”

There is also the matter of pride, Dallek added. “They may see it as a come-down from being a presidential nominee to being just one of 100 senators or 435 Congress members.”

People who know Romney say his sense of public duty would be a chief motivating factor if he decides to run for the Senate. That could appeal to voters in Utah, where Romney is well known for his work in the Mormon community and for running the 2002 Winter Olympic Games in Salt Lake City.

“His commitment to public service has always been very real,” said Kevin Madden, who served as a senior adviser and spokesman for Romney during his 2012 presidential run.

Romney has also shown a willingness to take on Trump, and could use a Senate seat as a bully pulpit to criticize the president’s policies and divisive rhetoric on race.

During the 2016 election, Romney called Trump a “phony, a fraud.” He skipped the Republican National Convention, as did former Presidents George H.W. Bush and George W. Bush, and did not endorse Trump’s White House bid. 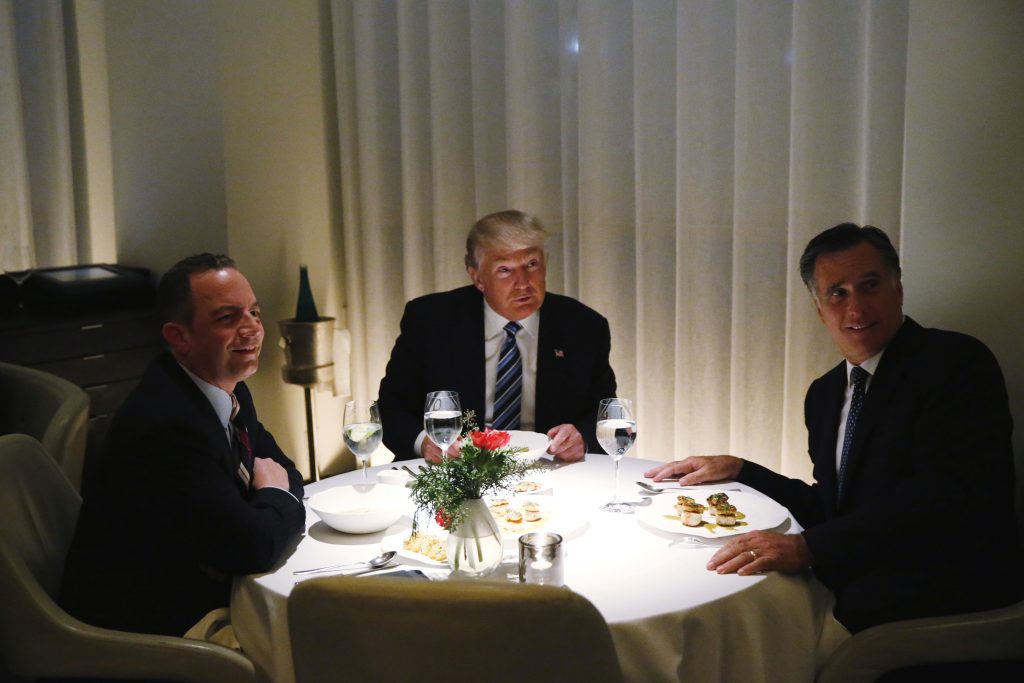 Then-President-elect Donald Trump sits at a table for dinner with Romney and his soon-to-be first White House chief of staff, Reince Priebus, at Jean-Georges at the Trump International Hotel & Tower in New York on Nov. 29, 2016. Photo By Lucas Jackson/Reuters

After the election, Romney interviewed with Trump for the position of secretary of state, meeting with him at an upscale Manhattan restaurant and at Trump’s golf course in New Jersey. But the job went to Rex Tillerson, and Romney continued to occasionally criticize Trump, including after the violent white nationalist rallies in Charlottesville, Virginia, last year.

Just this week, Romney took to Twitter to criticize Trump for using vulgar language to describe African countries during a meeting at the White House. The meeting was a critical point in the negotiations over a short-term spending bill, which broke down in recent days and led to a likely government shutdown Friday night.

“I think he also believes he has a lot to contribute to the debate, particularly the debate right now,” Madden said. Among mainstream Republicans, “there are those that worry about some of the long-term negative impacts of becoming a party that’s more defined by what it’s against than what it’s for,” he added.

Rob Jolley, one of Utah’s top lobbyists, said it appears all but certain that Romney has decided to enter the race to replace Hatch, who said earlier this year he would not seek a seventh term.

Hatch, the longest-serving Republican in the Senate and the chairman of the powerful Senate Finance Committee, announced his decision to step down one week after helping Republican leaders and Trump score a major legislative victory by passage the tax overhaul.

The decision cleared the way for a possible run from Romney, who is widely considered to be a virtual shoo-in for the seat if he launches a campaign. It was also a setback for Trump, who had personally lobbied Hatch, one of his closest allies in the Senate, to remain in office.

“It looks like he’s getting ready to announce at some point in the next few weeks,” Jolley said of Romney. He acknowledged the rarity of a presidential nominee-turned-rookie-senator, but said

Romney’s track record would differentiate him from the average first-time member of Congress. “Mitt brings some gravitas to the position that a normal freshman senator would not have,” he said. 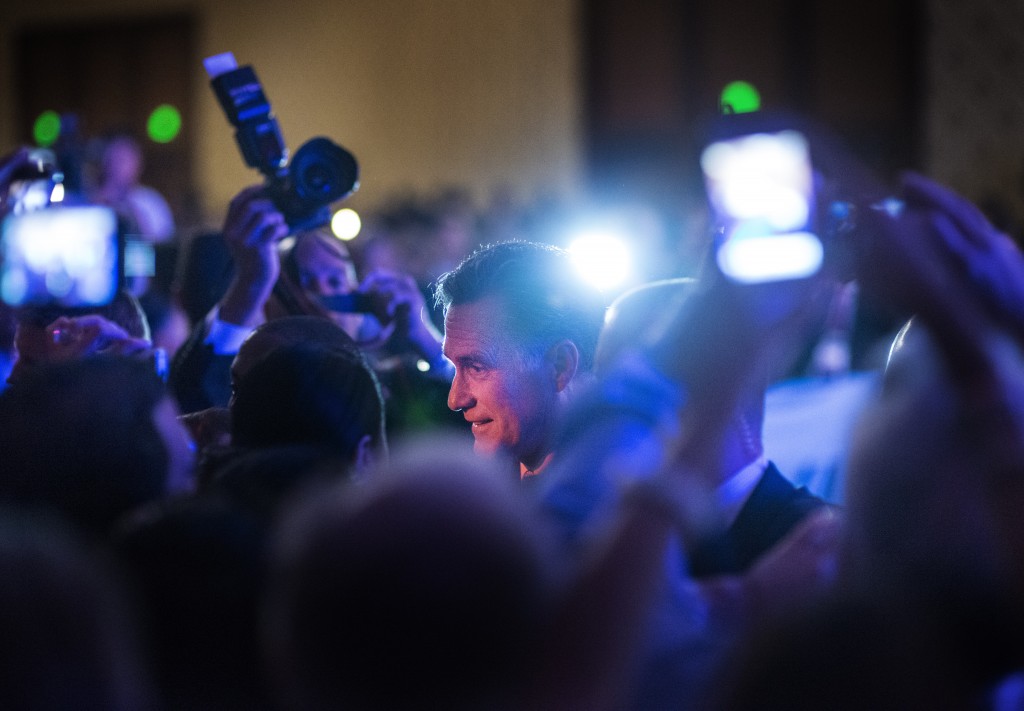 Romney on the campaign trail in 2012. Photo by Melina Mara/The Washington Post

Romney remains popular among Republicans in Utah, but Jolley said party insiders in the state have expressed concerns about his age.

The state’s other senator, Mike Lee, is 46 and is seen as a rising star on the right. If Romney won he would become Utah’s junior senator, according to the rules of seniority in the Senate, a potentially awkward arrangement because Romney is more than two decades older than Lee.

“We’re trading an 83-year old Orrin Hatch for a 70-something Mitt Romney,” Jolley said. “People are questioning whether it would be better to have someone younger who could be there for three, four or five terms.”

Warshaw, the presidential scholar, wondered if Romney would have even considered a return to politics if someone other than Trump won the 2016 election. “Would Mitt Romney be seeking Orrin Hatch’s seat if another Republican was president, or there was a Democratic president?” Warshaw said. “Is he running as a symbol of the never-Trump movement, or because the seat is vacant?”

The game of politics has changed dramatically in the years since Governor Romney was under the klieg lights.

Romney will no doubt face those questions if he decides to run for the Senate, along with the question of whether he is opening the door for another presidential campaign in 2020.

In the final scene in “Mitt,” Romney and his wife Ann say goodbye to their Secret Service detail in their driveway on Nov. 8, 2012, two days after Barack Obama’s re-election. The documentary ends with a shot of the couple alone in their living room, the race finally over, Romney staring out the window in silence.

Whatever future Romney was contemplating in that moment, it’s safe to assume that serving in the Senate under a President Trump was not it.

If Romney ends up joining the Senate, he would need to adjust to his role as a unique figure in U.S. political history, said Madden, Romney’s former spokesman.

But that would only be the start. To be successful, Romney would need to find the right balance between advocating for Utah’s interests and weighing in on national issues, Madden argued, all while learning to navigate a new media and political landscape.

“The game of politics has changed dramatically in the years since Governor Romney was under the klieg lights,” he said. If Romney is able to adapt, a career in the Senate could work, Madden added. “That’ll be the big test.”

Left: Mitt Romney could make history if he runs for a seat in the Senate. No vanquished presidential nominee in modern history has run for Congress after losing a race for the White House. (File photo by Kevork Djansezian/Getty Images)