GOP breaks may stem from party resistance to all things Obama

WASHINGTON — Republicans can blame their united stand against President Barack Obama for their party’s splintering.

Conservatives’ gut-level resistance to all things Obama – the man, his authority, his policies – gave birth to the tea party movement that powered the GOP to political success in multiple states and historic congressional majorities. Yet contained in the movement and its triumphs were the seeds of destruction, evident now in the party’s fracture over presidential front-runner Donald Trump.

Republicans rode that anger to majority control of the House in 2010 and an eye-popping net gain of 63 seats as voters elected tea partyers and political outsiders. Four years later, the GOP claimed the Senate, too.

For all the numbers, though, Republicans were unable to roll back Obama administration policies or defeat the Democratic president in 2012, further infuriating the GOP base.

Now the party of Abraham Lincoln is engaged in a civil war, pitting establishment Republicans frightened about a election rout in November against the unpredictable Trump, who has capitalized on voter animosity toward Washington and politicians.

“There would be no Donald Trump without Barack Obama,” said Sen. Lindsey Graham, R-S.C. No fan of Trump, Graham argued that resentment of Obama plus his own party’s attitude toward immigrants are responsible for the deep divide and the billionaire businessman’s surge.

Mainstream Republicans are hard-pressed to figure out a way forward with Trump, who has pledged to build a wall on the Mexican border, bar Muslims from entering the United States and equivocated over former Ku Klux Klan leader David Duke’s support. The candidate has assembled a growing coalition of blue-collar workers, high-school educated and those craving a no-nonsense candidate.

“I think they are at a loss to try to reconcile this nihilist wing of the Republican Party with conservative principles,” said Sen. Dick Durbin of Illinois, the No. 2 Democrat in the Senate. 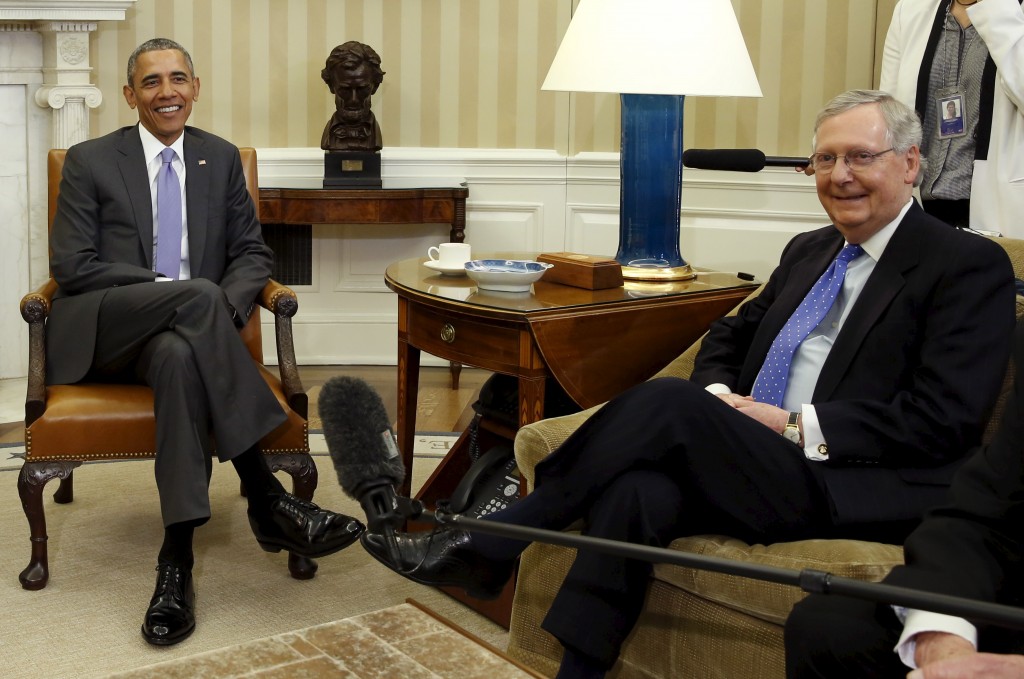 U.S. President Barack Obama (L) sits next to Senate Majority Leader Mitch McConnell (R-KY) during a meeting with the bipartisan leaders of the Senate to discuss the Supreme Court vacancy left by the death of Justice Antonin Scalia at the White House in Washington March 1, 2016. Yuri Gripas/Reuters

The disaffected Americans embracing Trump echo the angry voices that filled town halls in the summer of 2009 as fearful voters taunted lawmakers over efforts to overhaul health care. Obama and Democrats were undaunted, pushing ahead on a remake of the system despite unified Republican opposition.

In January 2010, thanks to tea party backing and conservative outrage, Republican Scott Brown won a special election in Massachusetts, claiming the seat that liberal Sen. Ted Kennedy had held for 47 years.

That sent people a message that “if you could win in blue Massachusetts, we could win in my state,” said Sal Russo, co-founder and chief strategist of Tea Party Express. “That changed the movement from a protest movement to a political movement.”

Three months later, in March 2010, Democrats rammed Obama’s health reform through Congress as mobs of protesters chanted outside the Capitol. Not a single Republican backed it.

That November, the tea party propelled Republicans shouting repeal health care to victory, among them Sens. Marco Rubio of Florida and Rand Paul of Kentucky. They defeated establishment GOP candidates more likely to compromise in Washington. Dozens of other tea party candidates captured House seats; many were making their first foray in politics.

Losers in 2010 were some of the moderate and conservative Democrats who had backed the health care law.

Along with Obama’s re-election in 2012 came another group of congressional tea partyers, including Sen. Ted Cruz of Texas. The movement’s strength ran headlong into Washington reality: Obama was president and Democrats still controlled the Senate. Efforts by Cruz and House conservatives to torpedo the health care law led to a partial, 16-day government shutdown in 2013.

Republicans triumphed a year later, capturing control of the Senate and knocking out some of the more moderate Democrats such as Louisiana’s Mary Landrieu and Arkansas’ Mark Pryor. In the House last year, they toppled House Speaker John Boehner, R-Ohio, a victim of his pragmatism.

Expectations among uncompromising conservatives were sky-high. So was the disappointment. Obama’s health care plan remained the law of the land.

“It definitely led to a wave in 2010 that gave us the majority, and then, what have we done since then,” said Rep. Dennis Ross, R-Fla. “That’s our responsibility to show what we have done since then, in spite of this president.”

Trump has tapped into voter frustration even though he’s not considered tea party. At the Conservative Political Action Conference on Friday, Jenny Beth Martin, co-founder of Tea Party Patriots, made clear that their man was Cruz.

Still, Republicans recognize the power of his candidacy and the ramifications.

“The American people are fed up,” said Rep. Tom Marino, R-Pa., one of a handful of Trump backers in Congress, “and if elected officials don’t realize it, we’ll be out of jobs.”