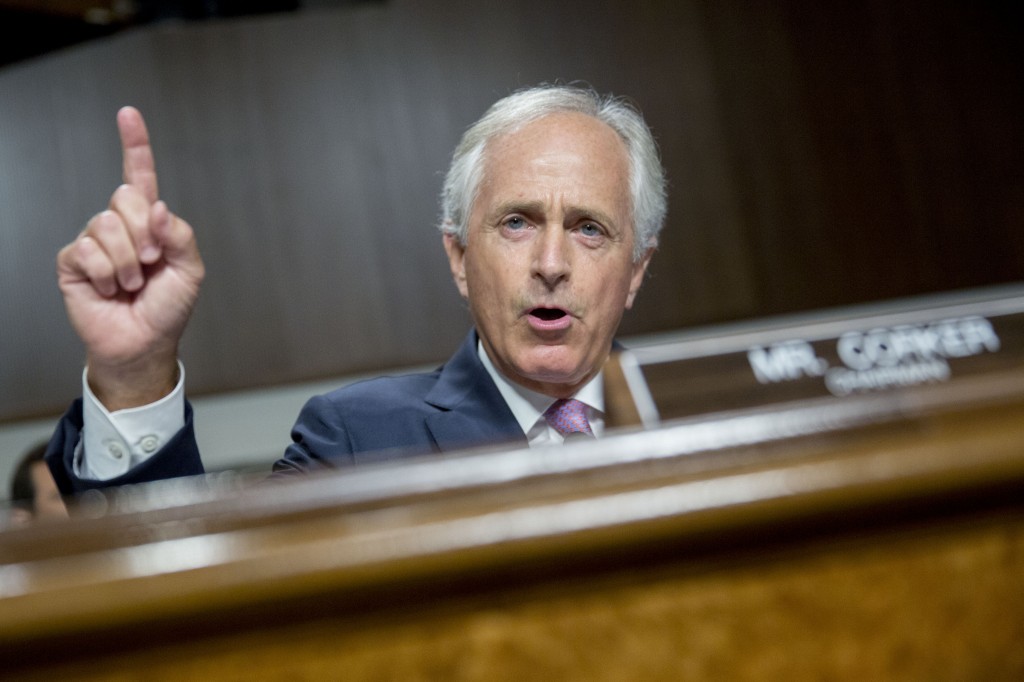 Senator Bob Corker, a Republican from Tennessee, warned that while he’s supporting deficit-financed tax cuts for now as a way to deal with arcane Senate rules, he won’t vote for the subsequent tax legislation if it blows a hole in the deficit. Photo by Andrew Harrer/Bloomberg via Getty Images

WASHINGTON — Congressional Republicans on Wednesday kicked off debate on House and Senate budget plans that promise slashing cuts to social programs — but whose real purpose is to grease the skids for a sweeping overhaul of the U.S. tax code that would add up to $1.5 trillion to the nation’s spiraling debt.

The companion GOP budget measures differ in key respects but both rely on rosy estimates of economic growth and illusory spending cuts to promise to wrestle the federal budget back into surplus within a decade.

The real-world trajectory of Washington, however, is for higher deficits as Republicans focus on tax cuts, a huge hike in the defense budget, and a growing disaster aid tally that is about to hit $45 billion.

Their appetite for spending cuts is limited to nonbinding promises, and even a token 10-year, $200 billion spending cut package demanded by tea party House Republicans appears likely to be scrapped in upcoming talks with the Senate.

“The train’s left the station, and if you’re a budget hawk you were left at the station,” said Rep. Mark Sanford, R-S.C.

Instead, the motivating force behind the budget measures is the Republicans’ party-defining drive to cut corporate and individual tax rates and rid the tax code of loopholes. They promise this tax “reform” measure will put the economy in overdrive, driving economic growth to the 3 percent range, and adding a surge of new tax revenues that would help bring the budget toward balance.

It’s also a key political imperative for Republicans — who control the levers of power in Washington but have no major legislative accomplishments to show for it after a protracted effort to repeal the Obama health law unraveled again last month. A face plant on tax reform would be an enormous political debacle.

The budget measure would provide key procedural help for the tax measure because it sets the stage for follow-on legislation that can’t be filibustered by Senate Democrats. Republicans used this so-called reconciliation procedure in their failed attempt to kill Obamacare, including its tax surcharges on wealthy people.

Democrats blasted the sweeping spending cuts proposed by Republicans — $5.4 trillion over 10 years in the House plan and somewhat less in the Senate GOP measure — as an assault on middle-class families and the poor.

“This is, like Yogi Berra said, deja vu all over again. Republicans used their Trumpcare bill to sneak in tax cuts for the rich,” said Senate Minority Leader Chuck Schumer, D-N.Y. “Now they’re using their tax cut plan — and they public about they’re tax cuts for the rich — and they’re sneaking in cuts to Medicaid and Medicare. But it’s the same playbook.”

In the House, the budget plan is finally on the floor for a two-day debate that was delayed by conservatives demanding follow-on action on a $200 billion spending cut bill and details on the party’s tax legislation.

The House measure, however, assumes that the upcoming tax bill won’t add to the deficit; the Senate version, however, would permit the measure to add $1.5 trillion to the $20 trillion-plus national debt over the coming 10 years. The final version is likely to stick closely to the Senate measure.

The Senate Budget Committee began a two-day debate on its version of the legislation on Wednesday afternoon, with a vote expected on Thursday. A floor debate would come later in the month.

Sen. Bob Corker, R-Tenn., one of his party’s budget hawks, warned that while he’s supporting deficit-financed tax cuts for now as a way to deal with arcane Senate rules, he won’t vote for the subsequent tax legislation if it blows a hole in the deficit.

“Unless it reduces deficits and does not add to deficits with reasonable and responsible growth models, and unless we can make it permanent, I don’t have any interest in it,” Corker said.