ATLANTA (AP) — Add one more group of contests to the white-hot races for Congress and governor that will dominate this year’s midterm elections: secretaries of state.

Former President Donald Trump’s attempts to reverse the results of the 2020 election and his subsequent endorsements of candidates for state election offices who are sympathetic to his view have elevated those races to top-tier status. At stake, say Democrats and others concerned about fair elections, is nothing less than American democracy.

“If they win the general election, we’ve got real problems on our hands,” said former New Jersey Gov. Christine Todd Whitman, a Republican who has pushed back against the false claims made by Trump and his allies about widespread fraud in the 2020 presidential election. “This is an effort to replace the people who oversee these races — to change the rules to make the results come out the way they want them to.”

The primary season begins in force in the coming week with elections in Ohio and Indiana. Ohio voters will decide which candidate will emerge from the Republican primary for secretary of state, with the winner favored to eventually win the office in the GOP-dominated state.

Primaries for the top election offices will follow over the next few weeks in Nebraska, Idaho, Alabama and the presidential battleground of Georgia. While Indiana also holds a primary Tuesday, nominees for secretary of state and some other offices won’t be decided until party conventions in June.

In all, voters in about two dozen states will be deciding who will be their state’s next chief election official this year. In three politically important states —- Florida, Pennsylvania and Texas — the position will be filled by whoever wins the governor’s race. In New Hampshire, the decision will be made by the state Legislature — currently controlled by Republicans.

States United Action, a nonpartisan advocacy organization co-founded by Whitman, has been tracking secretary of state races and identified nearly two dozen Republican candidates who deny the results of the 2020 presidential election.

That includes John Adams, a former state lawmaker challenging Ohio’s incumbent secretary of state, Frank LaRose, in Tuesday’s GOP primary. Adams has said “there’s no way that Trump lost” and said LaRose wasn’t any different than Stacey Abrams, a Democrat and national voting rights advocate who is running for governor in Georgia. 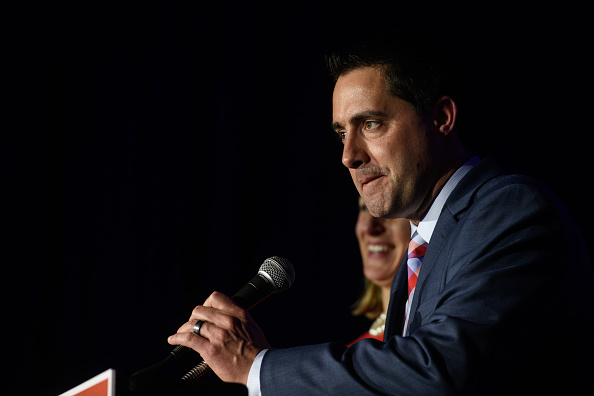 LaRose hasn’t talked much about the 2020 election in the campaign other than to say it was secure in Ohio and to tout his office’s pursuit of voter fraud cases. This marked a departure following the 2020 vote in which he praised the work of bipartisan election officials in running a smooth election, promoted voter access and presented statistics showing how rare voter fraud is.

Earlier this year, LaRose brushed aside questions about his shifting rhetoric.

“Unfortunately, some people want to make a political issue out of this,” he said. “Of course, it’s right to be concerned about election integrity.”

The pivot was enough to earn him an endorsement from Trump, who is considering another run for president in 2024 and said LaRose was “dedicated to Secure Elections.” LaRose has been touting the endorsement.

Michigan Secretary of State Jocelyn Benson, a Democrat, said it was important for Republican secretaries of state, in particular, to speak the truth about the 2020 election.

“Those secretaries who are accepting the support of election-deniers or accepting the support of a former president who openly interfered with the results of a free and fair election are abdicating their role and responsibility to stand as nonpartisan guardians and choosing to put their own partisan agendas ahead of democracy,” Benson said in an interview.

This year, the most high-profile races will unfold in four of the six states where Trump disputed his 2020 loss to President Joe Biden: Arizona, Georgia, Nevada and Michigan. Trump has endorsed secretary of state candidates in all but one, backing those who support his false claims.

There is no proof of widespread fraud or wrongdoing. Judges, including ones appointed by Trump, dismissed dozens of lawsuits filed by the former president and his allies after the 2020 election.

Last year, an Associated Press review of every potential 2020 voter fraud case in the six states disputed by Trump found nowhere near enough cases to change the outcome.

Kristina Karamo, Trump’s pick in Michigan, is the first to advance to the November election after state Republicans nominated her at the party’s April 23 convention. A community college professor, Karamo gained prominence after the 2020 election claiming she had seen irregularities in the processing of mail ballots while serving as an election observer in Detroit.

At a rally with Trump before the convention, she accused the media of trying to demonize her, adding “corruption in our elections systems is a national security threat.” She will face Benson, a former law school dean seeking her second term.

“All one has to imagine is what it would be like or what it would have been like if Brad Raffensperger had said, ‘Yes, I will find you those votes and deliver Georgia for you,’” Benson said. “That’s what could happen if you have an election denier serving as secretary of state.”

Raffensperger is the Republican secretary of state in Georgia who withstood enormous pressure to uphold the results of the presidential race there, won by Biden. At one point after the election, Trump called Raffensperger and asked him to “find” nearly 12,000 votes to overturn Biden’s win.

Of the 25 secretary of state races on the ballot this year, nine Republican and seven Democratic incumbents are running to keep their seats. While only one of the Democratic incumbents has drawn a challenger, seven Republican secretaries will be facing at least one GOP opponent who either denies Biden won or makes unsubstantiated claims that elections are not secure.

This includes Raffensperger, who rebuffed Trump’s demands and has drawn three primary challengers. Among them is one endorsed by Trump, U.S. Rep. Jody Hice, who objected to Georgia’s electoral votes being counted for Biden.

In nine states, incumbents have opted against seeking reelection, are running for higher office or are term-limited, leaving open contests. This includes Arizona and Nevada, which hold primaries in the coming months.

Both races feature Republican candidates — Arizona’s Mark Finchem and Nevada’s Jim Marchant — who have questioned the outcome of the 2020 election.

Another high-profile race is unfolding in Colorado, where a Republican county clerk under indictment for a security breach of voting systems is running to challenge Secretary of State Jena Griswold, a Democrat seeking a second term.

Mesa County Clerk Tina Peters has denied the charges, calling them politically motivated. She has been a frequent guest on conservative media and appeared at various events with Mike Lindell, the MyPillow CEO and Trump ally who has sought to prove voting machines were somehow manipulated in 2020.

In an interview earlier this year, Peters said she was committed to finding the truth of what happened in 2020 and hoped “the powers that be — instead of taking time to attack me — would solve violent crime, would look into election irregularities and find the truth.”

Colorado Republicans will be deciding who their nominee will be in late June.

Left: Mesa County Clerk and Recorder Tina Peters is in the rally at west steps of Colorado State Capitol building in Denver, Colorado on Tuesday, April 5, 2022. Candidates for higher office continue to try to cast doubt on the results of the 2020 election and integrity of Colorado elections as the 2022 election draws closer. Photo by Hyoung Chang/MediaNews Group/The Denver Post via Getty Images