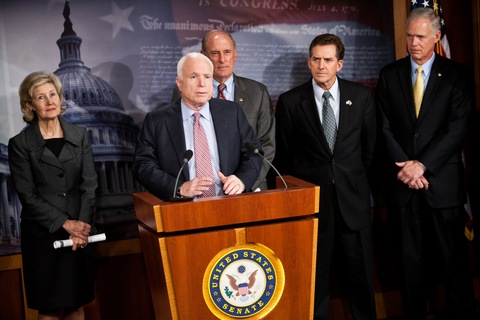 Responding and reacting to the public call for jobs, Senate Republicans on Thursday unveiled their own jobs plan, “The Jobs Through Growth Act” — one they say will create 5 million jobs to put Americans back to work.

At at afternoon news conference in the U.S. Capitol, 12 senators, led by Sen. John McCain, R-Ariz., said their legislation would serve as a blueprint to create jobs through growing the economy and not through government spending, as they say President Obama’s job plan does.

“In all due respect to the president, we’ve seen that movie before,” said McCain.

McCain and his colleagues admittedly said that their proposal is in direct response to President Obama’s campaign trail rhetoric that the Republicans have no plan of their own. McCain said now they do.

The legislation calls for:

Democratic leaders in the House responded immediately to the proposals.

“After blocking the American Jobs Act this week, Senate Republicans are clearly feeling the heat that they don’t have a jobs plan,” aides to Minority Whip Steny Hoyer said in a statement. “Unfortunately for them, the agenda they’re rolling out is just more of the same partisan ideas that won’t create jobs or grow our economy anytime soon. Their list looks like a greatest hits compilation of GOP favorites”.

A recent national poll showed that Americans favored President Obama’s jobs plan by a 2-to-1 margin.

That sentiment was not lost on maverick Sen. Lindsey Graham, R-S.C., who called for the president to host a “Jobs Summit” and said it would be helpful in this country to call together Republicans and Democrats to sit down together to see if they can find a breakthrough.

President Obama’s jobs plan failed in the Senate earlier this week in a 50-49 procedural vote. The House has no plans to bring up the bill in its entirety but leaders hinted it might consider parts of the bill, at some point.