WARREN, Mich. — With an eye on the general election – and suddenly “flexible” on immigration – Donald Trump has backed off from some of the hardline rhetoric that has fueled his presidential campaign, at least for the moment.

“Believe it or not, I’m a unifier,” Trump offered during a raucous rally Friday in suburban Detroit. “We are going to unify our country.”

Republican adversary Ted Cruz wasn’t having it. “Donald is telling us he will betray us on everything he’s campaigned on,” he said as he campaigned in Maine, one of five states voting in weekend primaries and caucuses.

Trump’s apparent outbreak of moderation on several fronts, including the most inflammatory one, immigration, comes after a dominant Super Tuesday performance that extended his reach for the Republican nomination and as GOP establishment figures stepped up to assail him.

In the rollicking Republican debate Thursday night, Trump retreated from a position paper on his website, saying he had swung in favor of more temporary H-1B visas for skilled foreign workers. His stance against that had been one of the few specific policies he had laid out.

“I’m changing, I’m changing,” he said. “We need highly skilled people in this country.” Hours later, his campaign released a statement backing away from the new position, deepening the sense that Trump’s agenda may be less strategic than improvisational.

More broadly, he spoke of the virtues of compromise.

“In terms of immigration – and almost anything else – there always has to be some, you know, tug and pull and deal,” Trump added. “You have to be able to have some flexibility, some negotiation.”

Cruz and others lashed out at Trump’s sudden embrace of flexibility on the central issue of his campaign. “Flexible is Washington code word that he’s going to stick it to the people,” Cruz said Friday. 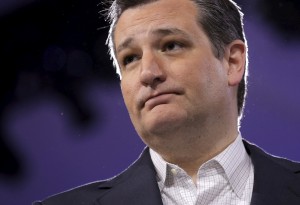 Campaigning in Kansas, rival Marco Rubio said Trump has shown “constant movement” on the issue, a “pattern” the Florida senator says is “disrespectful to voters.”

“He finally took a position on … guest workers coming from abroad, and then as soon as the debate was over he changed back,” Rubio said in Topeka, Kansas. He added, “I think it indicates that this is a person who has spent zero time thinking about public policy.”

Mitt Romney, the GOP’s 2012 presidential nominee, followed up a lacerating speech against Trump by declaring Friday he would not vote for the billionaire if he became the standard-bearer in the fall.

Romney told NBC’s “Today” show he would “do everything within the normal political bounds to make sure we don’t nominate Donald Trump.” He also said, “I’m not running for president and I won’t run for president.”

Still, some members of Romney’s vast donor network said they were ready should he reconsider. Chicago Republican donor Bill Kunkler said he had recently spoken to Romney’s 2012 finance chairman, Spencer Zwick, and told him he would support Romney again.

“Mitt is the guy who will put the party before himself,” Kunkler said.

Also this week, Republican foreign-policy luminaries from diverse flanks of the party wrote an open letter opposing Trump’s candidacy, for his “hateful, anti-Muslim rhetoric,” his “embrace of the expansive use of torture” and more.

Trump is showing new sensitivity on these matters.

He said Friday he understands the U.S. is “bound by laws and treaties” and he will not order U.S. military officials to violate or disobey those laws if elected president. His statement attenuated earlier comments that he would revive waterboarding in interrogations – which is now illegal – and “a lot worse,” and that he would target the wives and children of suspected extremists.

This was a switch of sorts from the debate the night before.

“These animals over in the Middle East, that chop off heads, sitting around talking and seeing that we’re having a hard problem with waterboarding?” he offered in the debate. “We should go for waterboarding and we should go tougher than waterboarding.”

Despite the softened tone on some issues, though, Trump is still Trump.

He canceled an appearance at the American Conservative Union’s Conservative Political Action Conference, often a can’t-miss event for candidates catering to the right. It was there Friday that Ben Carson brought a formal end to his campaign for president, where he drew an adoring standing ovation and said there are “a lot of people who love me, they just won’t vote for me.”

Trump showed no mercy for his critics when he spoke at the Detroit-area rally.