They got hundreds of thousands to rally. Where does the March for Science go from here?

WASHINGTON — The hundreds of thousands of people who rallied on the National Mall and in cities worldwide for the March for Science in April came to be noticed. It was a march meant to demonstrate enthusiasm and political clout, and by those measures, organizers believe they succeeded.

But as two dozen of them met in New York the following month for a debrief, they faced an obvious reality: A grass-roots organization that was quickly formed to plan a singular event was not, at least immediately, equipped for far-reaching and long-term science advocacy.

“The big picture question was (and continues to be): How do we successfully transition from a march into a movement and how do we continue to mobilize our diverse, interdisciplinary, passionate supporters for science advocacy?” Caroline Weinberg, one of the national march’s co-organizers, wrote to STAT in an e-mail from Paris, where she was meeting with that city’s local march coordinators.

In the coming weeks, the main organizers of the March for Science will begin to roll out their long-term strategy. Whether they can succeed in their efforts is an open question. Six months after the march, the movement remains a nascent one, despite organizers’ pledges of sustained activism. But the goal, organizers say, is clear: At a time when many in the community feel like science is under assault, create structures that sell and incorporate science into every level of daily life, and ensure that science advocates are recognized as a constituency at every level of government.

READ NEXT: 7 takeaways from the March for Science

For now, organizers have acknowledged that changing the way science is incorporated into American society — from elementary schools to universities and from city councils to the federal government — takes more than a one-day event, and needs to be done largely on a local level.

So in Houston, the local chapter has created a communications network to help scientists displaced by Hurricane Harvey temporarily relocate labs and continue their work wherever scientists offered space. That offer was quickly extended to researchers based in the Caribbean and Florida displaced by the more recent Hurricane Irma.

In Albuquerque, N.M., an organizer has partnered with a local expert in indigenous science and health equity. Together, the pair is considering a bike ride during which participants could take water samples to measure contamination from open uranium pits near Native American reservations.

And in Indianapolis, organizers of the local march are using leftover funds raised before the rally to administer a grant program for area schools, awarding up to $500 to science teachers who submit a detailed plan for a hands-on lesson.

In the Great Lakes region, for instance, a rumored plan to shutter a regional office of the Environmental Protection Agency required a number of local march chapters to band together.

“We started getting in contact with each other and forming a regional network so the larger marches on the Midwest could stay together,” said Rufus Cochran, a co-organizer for the Indianapolis march. His group is one of a number of chapters that have been incorporated as 501(c)(3) nonprofit organizations — a status the national group is currently seeking as well.

The threat of the EPA consolidation faded, but the groups in the region, which are planning a summit to meet in person this fall, have responded to other issues. In May, when President Trump pulled the United States out of the Paris climate accord, the Midwestern groups led a campaign to pressure local officials to publicly acknowledge climate change as a scientifically proven and human-driven reality. 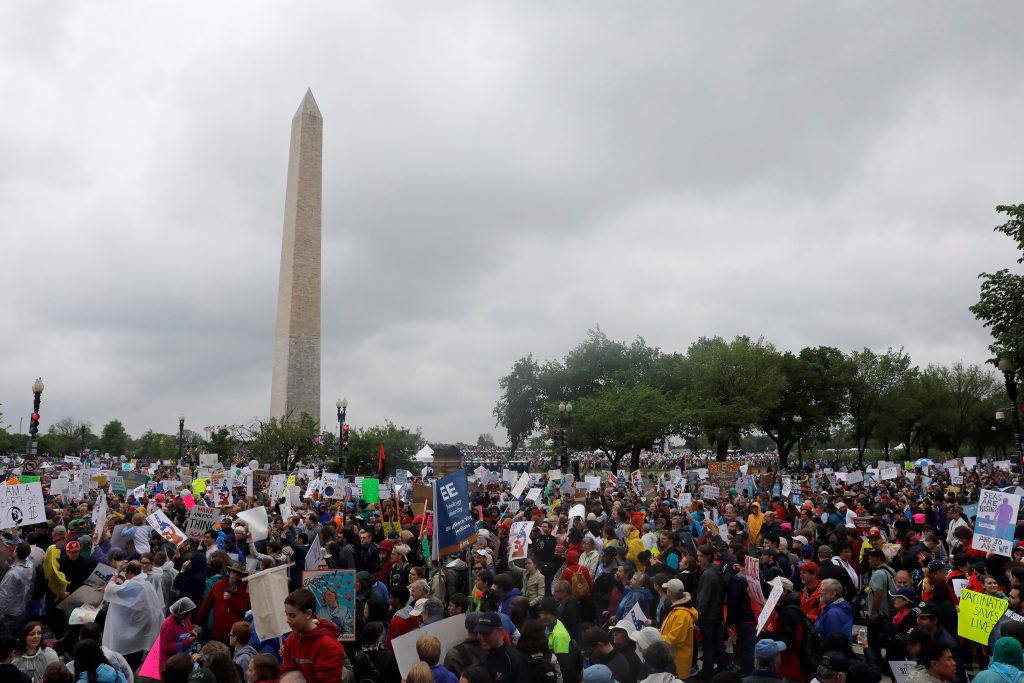 Demonstrators gather at the Washington Monument before marching to the U.S. Capitol during the March for Science in Washington, D.C., on April 22, 2017. Photo by Aaron P. Bernstein/Reuters

Cochran said that model of simple but effective advocacy could be replicable by science boosters nationwide.

“We’re not narcissistic enough to think we did it ourselves,” Cochran said, referring to the decision by some local mayors to issue statements denouncing the withdrawal from the Paris agreement. But, he said, “our goal isn’t to become a policy think tank, at least currently. That’s pretty ambitious. Our goal is to change the perception around science and bring science to people in different ways.”

The local efforts have zeroed in on projects befitting the challenges in various cities. Beyond coordinating to find scientists temporary lab space, Houston organizers have focused on science accessibility across the income spectrum.

“Children raised in low-income households have little exposure to science, even at school, where resources are often severely limited,” AJ Ruley, a Houston organizer, wrote in an email to STAT. “A science drive is in planning stages, along with a blood drive, we will offer STEM focused books and science kits for children and youth, especially those in low-income areas that were destroyed by Hurricane Harvey.”

While many have cited single instances of concern like an EPA office shuttering, a single piece of legislation, or even a hurricane, organizers have vowed in the future to remain organized regardless of circumstance.

“We are working to make sure that we don’t focus our efforts only around times when something particularly disastrous is happening,” Weinberg wrote. “That’s a critical part of advocacy and a very effective one, but we’re hoping to give people the tools and resources to be independent advocates year round — to hold representatives accountable for their actions every day.”

Monitoring 50 state legislatures and innumerable city governments — to say nothing of the federal government — remains a challenge, especially from afar. When many of the national planners met in New York, it was their first face-to-face encounter with other organizers.

The national staff that has been built out largely post-march includes nine part-time employees. Its lone full-timer is Chief Operating Officer Terry Kush, a former consultant for the National Consumers League who joined in August.

Koren Temple-Perry, the march’s new communications director, told STAT that Kush’s role would focus on providing support to satellite marches. And the staff will continue to oversee fundraising, which March for Science will soon ramp up in anticipation of its fall initiatives rollout.

The group raised more than $1 million just prior to the march and during the second quarter, Temple-Perry wrote. “Those sources come mainly from donations and merchandise sales and we are planning larger fundraising campaigns this fall,” she wrote.

The organization’s plans for the rest of 2017 will focus on allowing cities worldwide to do what Houston, Indianapolis, Albuquerque, and countless others have done already.

“Part of that is going to be an advocacy guide on best practices paired with ‘issue’ one pagers,” Weinberg wrote. “Instead of telling people what evidence based policy they should call their representative about, we want to encourage a conversation around why. Get scientists to get into their communities to share that ‘why’ — to build a powerful community of science supporters with the resources and knowledge to advocate for science in policy and society.”

The group also plans a “students for science” initiative, a high school student-designed initiative aimed at getting teens involved in activism.

There is also talk of bringing the March for Science back next April for an encore.

“I would like to see a lot more progress a lot faster, but that’s not how building something far-reaching works,” said Valorie Aquino, a local organizer in Albuquerque who sits on the national board and is the organization’s co-chair. “We’ve got a big table, we’ve invited a lot of people. I’m really excited for the coming months when these campaigns get more solidified.”

This article is reproduced with permission from STAT. It was first published on Sept. 14, 2017. Find the original story here.