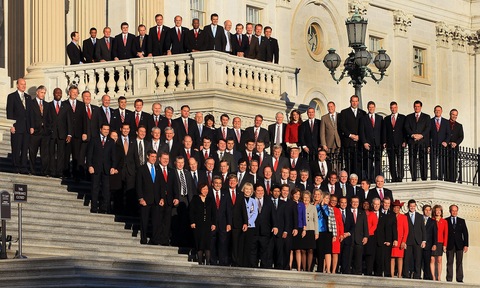 Newly elected freshman members of the upcoming 112th Congress pose for a class photo on the steps of the U.S. Capitol. Photo by Mark Wilson/Getty.

Why are we surprised when campaign trail promises or high-minded mission statements collide with reality?

I was left to ponder just that this week when I went to the Library of Congress to have lunch with the chiefs of staff for incoming members of Congress – many of whom have never held any public office before.

The orientation, sponsored by the Congressional Management Foundation, turned out to be handy way for me to get a peek at what shell-shock looks like. When Brad Fitch, the foundation’s executive director, started off his remarks with a cheery “Welcome to Washington!” most of the new staffers in the room seemed a bit stunned.

The truth is, it’s hard for politicians who in many cases have been running hard against Washington for more than a year, to roll into the capital on a brilliant autumn day and suddenly discover that – just like that — they have become Washington.

I tried to be gentle. The budget will not be balanced in a week. The health care law will likely not be repealed and replaced — as so many campaigned for — in a month, or even a year. In fact, on the same day that we were consuming our chicken and salad, the new lawmakers were also electing new leaders who looked a lot like the old leaders – John Boehner and Nancy Pelosi…Harry Reid and Mitch McConnell.

Fitch, a former Congressional aide, was blunter than I, handing the newbies a list of 10 mistakes to avoid, which he helpfully published in the Capitol Hill newspaper Roll Call.

I’ll take the liberty of summarizing them:

And, Fitch added, never ever let your boss hire his own staff. He or she will only make enemies. That’s your job.

To this, I added a few media tips of my own.

But there is one more piece of advice I forgot to share which applies to both the public servants coming to town and reporters and analysts who will be watching their every step.

I was reminded of this again this week when a fairly well-known national political analyst turned to Twitter to offer his analysis of the upcoming Chicago mayoral election.

This analyst does not live in Chicago, and as near as I can tell, has never before turned his gimlet eye on municipal politics. Tweeting about former White house Chief of Staff Rahm Emanuel’s campaign, he said “Everyone from the cabbie to the hotel clerk said he’d win.”

I was left to wonder if the analyst bothered to talk to anyone not on his Reagan to O’Hare commute. But the conventional wisdom – for Washington insiders, at least – is that Emanuel is the next mayor. They may be right, but once we reach our conclusions, don’t we stop listening? Isn’t that how we get caught by surprise?

So I, for one, am tamping down my expectations, eschewing conventional wisdom and being kind to all of Washington’s newcomers. It cuts down on the shell-shock.