A guide to Georgia’s special election

Tuesday’s runoff election for Georgia’s sixth congressional district is the most expensive House race ever. Outside groups on both sides have poured millions into the contest between Republican Karen Handel and Democrat Jon Ossoff in a local race that has taken on national implications.

Ossoff and Handel — who finished first and second in a crowded field earlier this year, earning a spot in the two-way runoff — are vying to fill the seat held by Health and Human Services Secretary Tom Price, who stepped down from Congress to join the Trump administration. The seat, which covers the suburbs north of Atlanta, has become a proxy war between Republicans and Democrats trying to map out the future of their parties in the Trump era. Here’s what you need to know about the race:

What makes this race so important?

It’s risky to read too much into a special election. But the race is a key test case for both parties as they start preparing for the 2018 midterm elections.

If Ossoff wins, Democrats will argue that the party’s liberal base is energized and capable of flipping more House and Senate seats next year. An Ossoff victory would also underscore the strength of the left’s opposition to President Donald Trump and his political agenda. Democrats have a lot riding on the outcome. The party’s candidates came up short in the other two special congressional elections this year, in Montana and Kansas.

Republicans also have a lot at stake. If Handel wins, they’ll point to her victory as proof that the left’s resistance to Mr. Trump doesn’t translate to change at the ballot box. Additionally, a victory by Handel would send a signal to other Republicans in moderate districts that they can withstand a strong general election challenge in 2018.

The campaigns and outside groups on both sides are expected to spend at least $42 million just on television and radio ads alone. Overall, the race is expected to exceed $50 million in spending. Local television stations have added more programming to their schedules to meet the demand for campaign advertising around the race, which has shattered the previous record for a House race. The record was held by a 2012 Florida contest that cost just under $30 million.

“There a lot of folks in the metro Atlanta media market that are ready to wake up Wednesday morning and not see the ads anymore,” said Michael Smith, the communications director for the Democratic Party of Georgia.

Ossoff raised more than $23.6 million through May 31, according to campaign finance filings. Handel raised $4.5 million during the same period. As of May 31, Ossoff’s campaign received donations from 51,014 individuals; 5,331 individuals donated to Handel’s campaign. 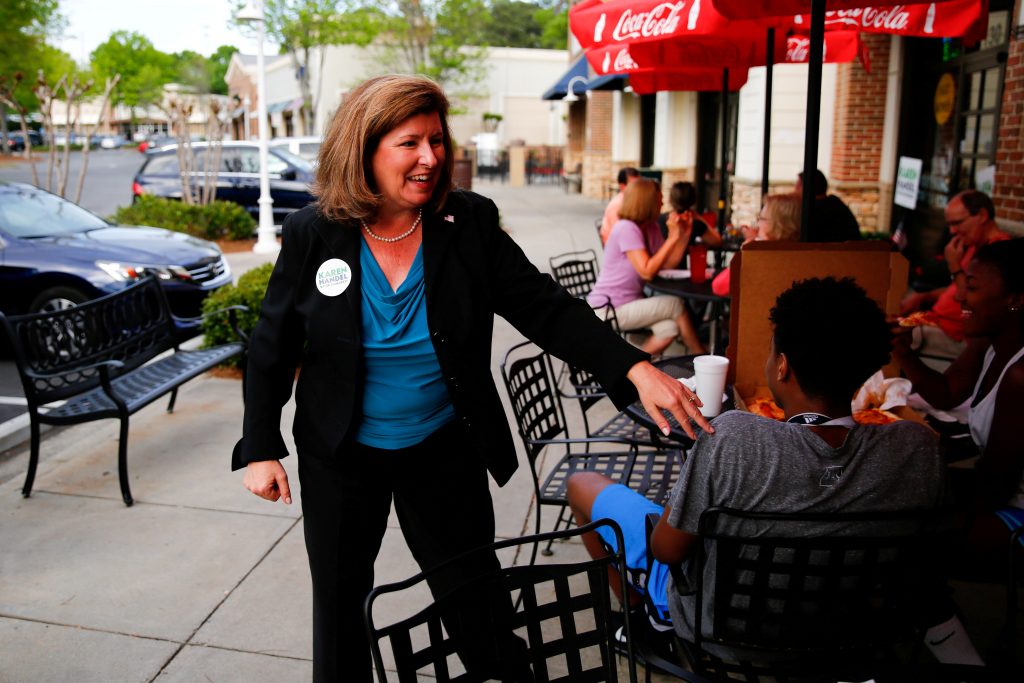 Karen Handel talks to supporters during a campaign stop in Alpharetta, Georgia in April. Photo by REUTERS/Kevin D. Liles

Who are Handel and Ossoff?

On the campaign trail, Handel has highlighted her lifelong conservatism and experience in the private sector and in Georgia state politics. She previously served as Georgia secretary of state, where she implemented controversial voter ID laws.

Handel’s experience in government contrasts with Ossoff’s status as a political newcomer. Ossoff, 30, is a documentary filmmaker and former congressional aide who has been criticized for his inexperience. Ossoff has largely run on a platform of opposition to Trump and the GOP-controlled Congress.

“I think that Democrats for sure think if they win this, they will win every targeted race in 2018,” said Maddie Anderson, a spokesperson for the National Republican Congressional Committee. “I think that’s absurd. Republicans were always to going to compete heavily to keep this seat. Democrats see an opportunity here because Trump underperformed.”

Republicans have held the district since 1979. Newt Gingrich, a former House speaker, represented the district for two decades. Price won the seat in 2004 and held it until he joined Trump’s Cabinet earlier this year. Price carried the district by 23 points in 2016.

The race has highlighted how divided many voters feel, more than six months after the 2016 election. The district seems more fractured politically now than it was after the presidential election, said Louise Palmer, the co-founder of a local chapter of the liberal group Indivisible.

Palmer, who has campaigned for Ossoff, recalled stories of Ossoff yard signs being yanked from the ground, and a man in a car giving an Ossoff volunteer the middle finger followed by the Nazi salute outside of an early voting center.

“Neighbors are pitted against neighbors,” Palmer said. “I wish we could find some middle ground.”