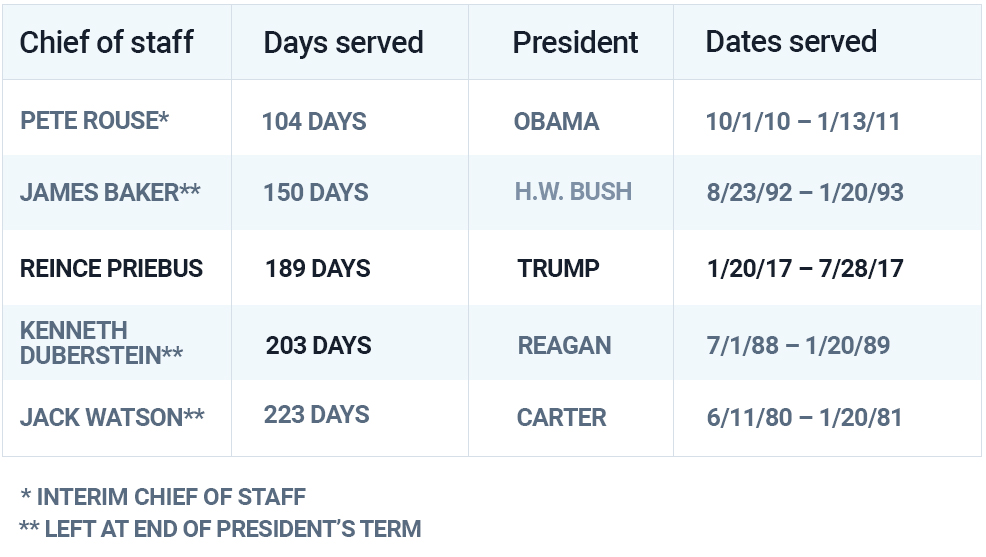 Reince Priebus became one of the shortest-serving chiefs of staff Friday when President Donald Trump tweeted he would replace Priebus with John Kelly, Trump’s secretary of Homeland Security and a retired Marine four-star general.

Priebus lasted 189 days on the job, the fewest of any chiefs of staff who were not leaving the office with their president or serving in an interim role.

Priebus lasted 189 days on the job, the fewest of any chiefs of staff who were not leaving the office with their president or serving in an interim role. (It’s even fewer if, as he told several reporters Friday, he actually resigned privately the day before).

And Kelly, in taking Priebus’ job, becomes the shortest-serving secretary of Homeland Security.

Priebus’ departure was something White House Communications Director Anthony Scaramucci threatened in interviews with the New Yorker and CNN on Thursday.

“They’ll all be fired by me,” Scaramucci told the New Yorker. “I fired one guy the other day. I have three to four people I’ll fire tomorrow. I’ll get to the person who leaked that to you. Reince Priebus-if you want to leak something-he’ll be asked to resign very shortly.”

The chief of staff role formally began under President Harry Truman, whose chief, John Steelman, served the duration of his presidency.

Before being tapped by Trump for chief of staff, Priebus was the longest-serving chair of the Republican National Committee, serving three consecutive terms while Democrat Barack Obama was in the White House.

Priebus was tapped by Trump because he was seen as a “whisperer” to House Speaker Paul Ryan, R-Wis., Washington Post reporter and Washington Week moderator Bob Costa told PBS Newshour’s Judy Woodruff on Friday — something the president likely hoped would help him deliver on campaign promises to repeal and replace the Affordable Care Act. The Senate handed Republicans, and Trump, a defeat early Friday when it failed to advance a skinny repeal of that legislation.

Pete Rouse, who served as an interim chief of staff under President Barack Obama, has the shortest term at 104 days. James Baker served 150 days before leaving office with President George H. W. Bush.

Obama had five chiefs of staff during his eight years in office, starting with Rahm Emanuel and ending with Denis McDonough, who served for the entirety of Obama’s second term. Bill Clinton and Ronald Reagan each had four chiefs of staff; George H.W. Bush had three.