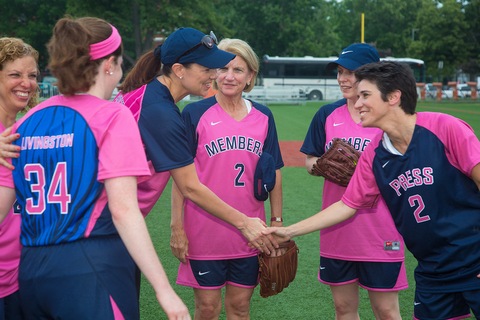 There were a lot of great things about the Bad News Babes victory in the fifth annual Congressional Women’s Softball Game Wednesday night.

Sure, winning feels terrific. Especially the second year in a row.

And I adore all the members of the press team. Some were already friends, some I bonded with at 7 a.m. on the field over two months of twice-weekly practices, or at the batting cages in Arlington, Virginia after work. We’re a supportive bunch.

And who doesn’t love to heckle the people they cover day in and day out?

The members’ team enjoyed needling the reporters, no doubt. They even took to the House floor to declare, “We want to defeat the common adversary which is the press corps” hours before the game.

In the end, it was the Bad News Babes who earned the headlines.

That’s right, the press team prevailed 11-8 even as a thunderstorm boomed its warning nearby. A few raindrops fell in the final inning of what was a closely matched game all the way until the end. 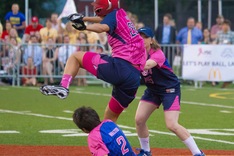 But the best part was the core reason we all suited up in blue and pink. The game raised double the proceeds that came in last year — bringing in more than $125,000 for the Young Survival Coalition.

(That’s including an anonymous $5,000 donation that rolled in right around the time House leaders Speaker John Boehner and Minority Leader Nancy Pelosi showed up.) 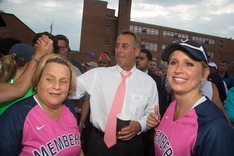 YSC is such an important organization — working to promote breast cancer awareness and help young women stricken by the disease.

They were my reminders as I played, and everyone else on the field had their own inspiration as well. We all have sisters and partners, daughters and mothers, friends and other loved ones we’ve seen struggle with cancer.

That’s what led to adding #beatcancer to each of our mantras to psych out the other team. 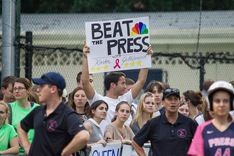 According to the official scorekeeper, Wednesday’s game “featured seven lead changes, nineteen hits, and an electric atmosphere with over 1,000 fans in attendance.”

Members team co-captain Rep. Debbie Wasserman Schultz, a breast cancer survivor herself and arguably one of the top trash talkers, was confident late Wednesday night at the after-party.

“Eventually we’ll get the trophy back, but we are so proud we doubled what we raised last year,” she said.

“You united us like no Congress has been united, so we’ll see you next year,” added Rep. Shelley Moore Capito, R-W.Va.

Sen. Kirsten Gillibrand, who admitted after the game that pitching isn’t easy, said that even in this hyperpartisan era, the field is an example of “one place that’s not broken” in Washington. “It makes a huge difference,” the New York Democrat said. 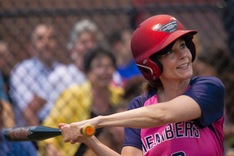 The members said they can’t wait for a rematch, and Bustos told me she wouldn’t mind meeting on another type of field, for a Powder Puff Football contest.

Co-captain Amy Walter noted the members were still trash-talking even after losing. She got cheers from her fellow Babes as she said she had two words for them: “Score. Board.”

For those keeping track, my performance wasn’t half bad. I scored a run, walked one inning and advanced a runner in the final inning, even though I was tagged out at first base.

People who chose Hunt and third base rock star Abby Livingston for their lineup in the Roll Call Fantasy Softball contest scored high. Check out the winner.

Don’t miss the preview video put together by the NewsHour’s Ellen Rolfes and Cindy Huang.

And see you next year.