Clinton aiming to shore up base of supporters in Iowa

SIOUX CITY, Iowa — Seeking an army of volunteers, Hillary Rodham Clinton is trying to build an organizational edge in Iowa as some of her lesser-known Democratic rivals clamor for attention in the state that tripped up her first presidential campaign.

Clinton flew to Iowa on Saturday night after her high-profile New York kickoff, telling supporters at a Sioux City house party that her campaign would seek to rally the country around an agenda for the future. “Everybody has a role to play,” Clinton said, urging supporters to sign up to join her campaign.

Despite her dominant position in the Democratic primaries, Clinton’s allies are trying to erase the memories of her third-place finish in Iowa’s 2008 caucuses, the contest that fueled Barack Obama’s rise to the White House. The former secretary of state’s Iowa event was streamed online to more than 600 similar gatherings around the country, covering every congressional district in an effort to add volunteers to the campaign’s roster.

Clinton planned to address supporters at the Iowa State Fairgrounds in Des Moines on Sunday and then travel to the Mississippi River city of Burlington. But she had company in the state: One of her main Democratic challengers, Vermont Sen. Bernie Sanders, was campaigning across the state during the weekend. Former Virginia Sen. Jim Webb, who is exploring a potential Democratic bid, was holding events in Iowa on Sunday. 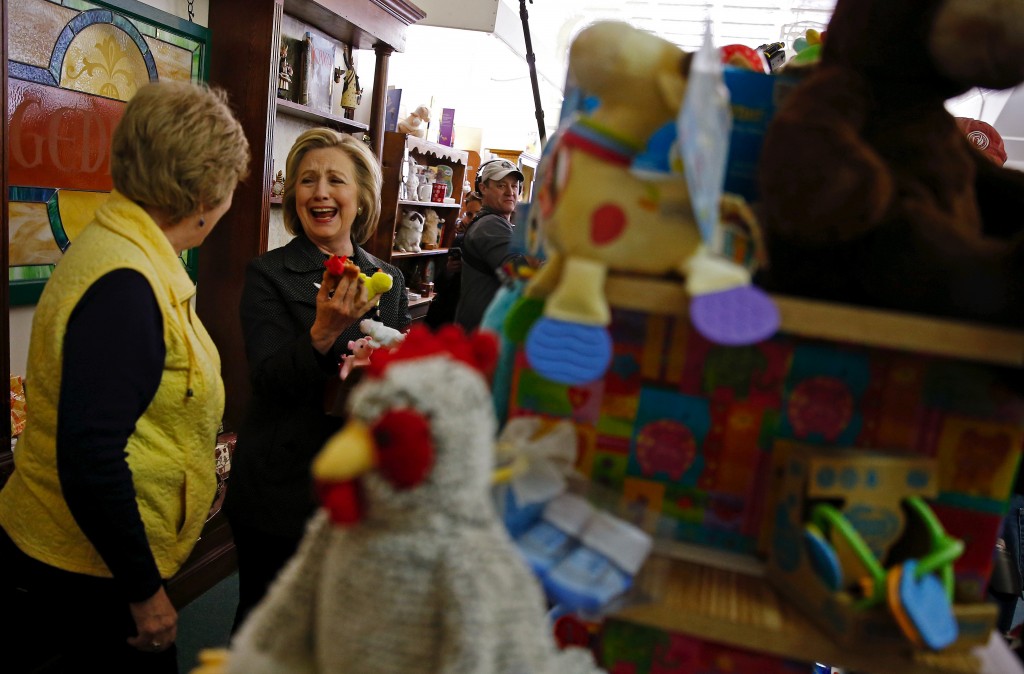 During her New York speech, Clinton remained silent on some issues of critical importance to the Democratic base, most notably a Pacific Rim trade pact backed by Obama but opposed by organized labor, liberals and others who say it will cost the U.S. jobs. The agreement has not been finalized or submitted to Congress.

Sanders, who has opposed the trade deal, again questioned Clinton’s refusal to say where she stood on the Trans-Pacific Partnership. “Most Democrats in the Congress are against it. But I don’t understand how you don’t have a position on this issue,” he said Saturday in Des Moines, where he opened a new campaign office.

“You can’t take a position on a trade bill that you can’t see,” Clinton’s campaign manager, Robby Mook, told CBS’ “Face the Nation” on Sunday. Clinton and her advisers are not saying whether she supports legislation in Congress to give the president special negotiation authority on trade deals.

In New Hampshire, former Maryland Gov. Martin O’Malley pointed to his executive experience while his campaign noted to supporters in an email that Clinton “didn’t say that she would take any substantive actions to hold Wall Street CEOs accountable for reckless behavior. Nor did she weigh in on the secretive TPP deal that could depress American wages and cost American jobs.”

In New York, Clinton offered herself as a fierce advocate for those still struggling from the Great Recession.

“I think you know by now that I’ve been called many things by many people,” Clinton said to cheers and laughter from the crowd of roughly 5,500 gathering on New York’s Roosevelt Island in the East River. “Quitter is not one of them.”

Hours later in Iowa, Clinton added, “I don’t believe we should ever quit on our country.”