The chairman of the House Oversight Committee announced plans Monday to subpoena a former White House official to testify about the White House security clearance process, and warned more subpoenas would follow if the Trump administration doesn’t explain how senior officials, including Jared Kushner, were cleared to view secret information.

In a letter to Pat Cipollone, the White House counsel, Rep. Elijah Cummings, D-Md., said the committee planned to issue a subpoena Tuesday to Carl Kline, who worked as the director of personnel security at the White House during President Donald Trump’s first two years in office. 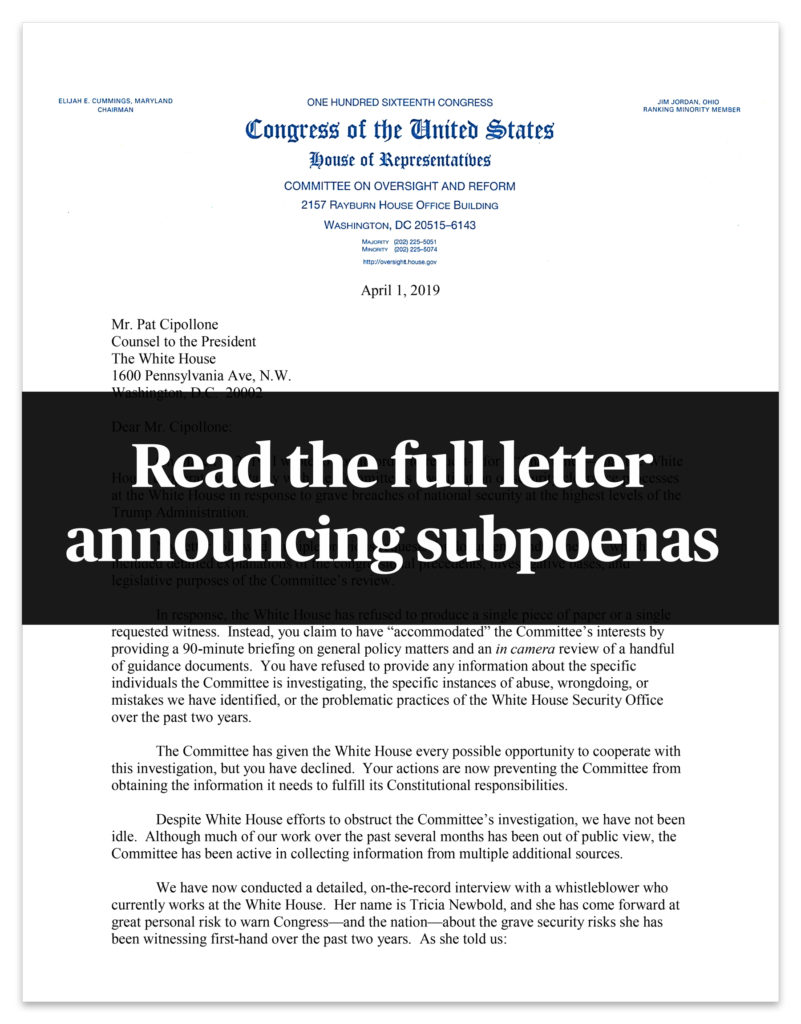 The committee plans to interview other current or former White House security officials after it interviews Kline, Cummings wrote, adding that additional subpoenas would be issued if the White House doesn’t cooperate with the investigation.

Cummings said the steps were necessary because the White House hasn’t complied with repeated requests for detailed information about how senior administration officials gained security clearances after Trump took office.

“The White House has refused to produce a single piece of paper or a single requested witness,” Cummings wrote.

The House Oversight chairman also took the unusual step Monday of publicly releasing the testimony of a current White House official involved in granting security clearances who told the committee that 25 officials were denied security clearances, but the denials were then overturned.

The whistleblower, identified as Tricia Newbold, is the adjudications manager in the Personnel Security Office at the White House. Cummings said Newbold, who handles security clearances for senior administration officials, told the committee that applications for security clearances “were not always adjudicated in the best interest of national security.”

Read the memo about whistleblower testimony. 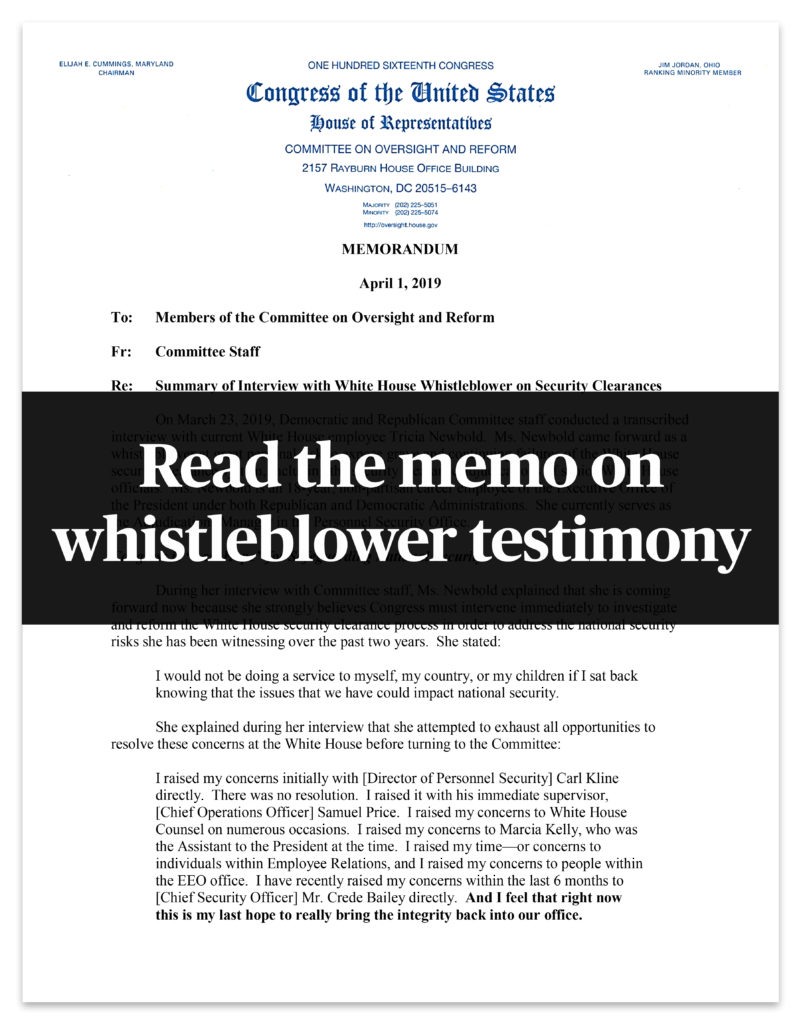 Newbold testified that in one case she denied a security clearance application for a top official, described as “Senior White House Official 1,” but Kline, who now works for the Department of Defense, later overturned the denial. Newbold said the same thing happened with another official, who was also not identified by name, whose application had been initially denied due to “multiple disqualifiers, including foreign influence and outside activities.”

Though the senior officials weren’t named, the testimony Cummings released Monday prompted speculation that one of them was Jared Kushner, Trump’s son-in-law and a senior White House official who has run into issues with his security clearances in the past due to potential conflicts of interest with his real estate company and foreign business ties.

The New York Times reported last month that Trump intervened to approve Kushner’s security clearance after it had been rejected, something the president has denied. Kushner has had to amend his security clearance numerous times since becoming a White House adviser after failing to disclose information about his business dealings.

In another case Newbold outlined in her testimony, Kline asked her to overturn her decision to reject a security clearance — known as an “adjudication denial” — for a senior National Security Council official. Newbold said she refused, and the official now no longer works for the White House.

Newbold said retaliatory action had been taken against her over some of the decisions, causing her to fear for her job. But Cummings said she had agreed to testify anyway because she wanted to warn Congress about “grave security risks” posed by the White House security clearance process.

In his letter to the White House, Cummings said the House Oversight Committee’s probe would now focus on obtaining information about the security clearances for several current and former White House officials.

Cummings launched the investigation into security clearances in January, and has since issued several requests to the White House to provide relevant documents and information. On March 1, Cummings sent what he called a “final” request for the White House to voluntarily cooperate with the probe.

But Cummings dismissed the claims Monday, writing that the White House was obstructing Congress’ responsibility to provide oversight of the executive branch.

“The Committee has given the White House every possible opportunity to cooperate with this investigation, but you have declined. Your actions are now preventing the Committee from obtaining the information it needs to fulfill its Constitutional responsibilities,” Cummings said.

The move Monday by Cummings to subpoena Kline — and threaten to issue more subpoenas — comes as House Democrats ramp up their investigations into Trump on a number of fronts.

The House Judiciary Committee announced Monday that it would vote later this week to authorize subpoenas for special counsel Robert Mueller’s full report, and the evidence he used to reach his conclusions.

Mueller submitted his findings earlier this month, but the full report has not yet been made public. Attorney General William Barr, who released a summary of its principal conclusions, said last week that he planned to release a redacted version of the report by mid-April.