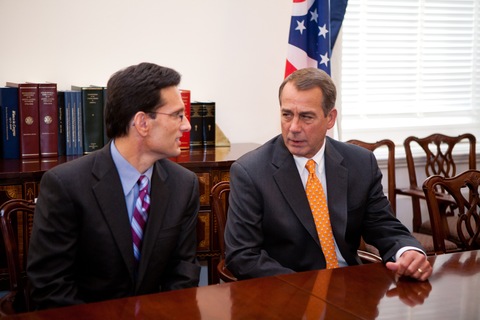 House Republican leaders showed Tuesday that they weren’t keen on President Obama’s invitation to compromise over tax policy in negotiations to raise the federal debt limit, again making clear they wouldn’t support any increase in current tax rates as part of any effort to reduce the deficit and increase that limit.

The leadership spoke to reporters after meeting with the House Republican conference to talk about the debt limit debate.

“Right now this economy is ailing, and we don’t believe, nor do I think the American people believe, that raising taxes is the answer for what’s vexing most people in this country, the lack of jobs and growth,” House Majority Leader Eric Cantor, R-Va. said. “Why does he insist on raising taxes when we are trying to fix the health of this country?”

On Monday President Obama said Republicans needed to compromise in order to reach any deal, and said he would be willing to look at changes to entitlement programs, something that is unpopular among leaders in his party. However, he has not specified what those changes would be.

House Speaker John Boehner, R-Ohio, laid out three principles under which he would operate when negotiating a debt limit increase: spending cuts have to be larger than the increase in debt ceiling, no tax increases and controls on future spending.

Boehner claimed President Obama did not have a plan.

“Where’s the president’s plan? When is he gonna lay his cards on the table?” Boehner asked. “This debt limit increase is his problem.”

Boehner, Cantor and other leaders from House and Senate will meet again with President Obama at the White House at 3:45 p.m Tuesday to continue the negotiations.