4:30 p.m. ET | A second vote in the House of Representatives Friday portrayed a complex portrait on Congress’ attitude toward the Libya mission, with a vote to cut off some of its funding falling short by a 238-180 vote. Despite the earlier vote, rejecting a limited one-year authorization for military intervention, members of Congress had mixed feelings on how far they should go in rejecting President Obama’s decisions on Libya.

Many legislators may have been swayed by the argument that, in taking a broad swipe at President Obama over Libya, the House could both unsettle NATO and give comfort to Libyan leader Moammar Gaddafi.

“The world is watching our actions today. The world is asking, what are we going to do?” said Rep. Adam Kinzinger (Ill.), a GOP freshman. “Now, will we today pull the rug out from under [Libyan rebels], simply because we have a dispute between the legislative and the executive branch?”

We’ll have more on what the Libya votes mean on Friday’s NewsHour with guests Norm Ornstein of the American Enterprise Institute and Todd Zwillich of WNYC and The Takeaway radio program from Public Radio International. 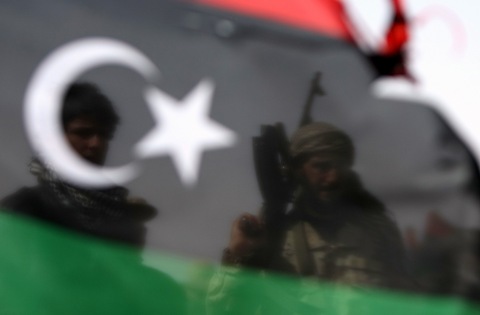 The House of Representatives voted 295-123 Friday against a measure that would authorize U.S. involvement in Libya for a year, formally registering an objection to President Obama’s authorization of NATO-led air strikes. The measure is likely largely symbolic since it is not expected to passed in the Senate.

Republican members of the House, most prominently House Speaker John Boehner, have objected to what they call the president’s lack of congressional consultation and violation of the War Powers Resolution of 1973, which requires the White House to seek congressional approval to deploy military forces for more than 60 days. The Obama administration has argued that because there are no troops on the ground involved in hostilities, and because the United States is playing a supporting role, the action does not fall under the War Powers Act.

The Senate may instead pass a measure introduced by Sens. John Kerry, D-Mass., and John McCain, R-Ariz., to authorize military operations in Libya for one year, providing an avenue for limited authorization of the current mission, which has now lasted for three months.

Friday’s vote marks the first time Congress has voted down a military operation since 1999 during the Bosnian war, when it moved to restrict President Clinton’s involvement.

The NewsHour’s Morning Line examined the timing of the vote Friday:

Speaker Boehner said he was bringing up the votes because Congress needed to exercise its voice in the debate after President Obama had left them out of the loop over military involvement.

“I believe, and most of my colleagues believe, that the president have failed to make his case as to why we have engaged Libya,” Rep. Boehner said Thursday. “Because of the president’s failure to consult with the Congress, failure to outline to the American people why we are doing this before we engaged in this, puts us in the position where we have to defend our responsibilities under the Constitution.”

On Thursday, Secretary of State Hillary Clinton was on Capitol Hill to convince Democrats to back the president and not vote to defund any operations in Libya.

Jennifer Steinhauer of the New York Times reports that Clinton told attendees that passing the restricted funding bill would be disastrous for American interests in the country.

Opposition to U.S. involvement stretches from anti-war Democrats, like Rep. Dennis Kucinich of Ohio, to Republicans in the Boehner camp, who think President Obama didn’t sufficiently consult Congress on the decision.