How 2020 could shape the conversation on race in the U.S.

No matter what, American racial tensions will be smack in the middle of the 2020 campaign.

In his reelection bid, President Donald Trump has revived themes of race and ethnicity as one of his campaign talking points. Democratic presidential candidates have responded by calling out Trump’s attacks on lawmakers of color and remarks denigrating migrants as rhetoric that embodies or emboldens white supremacist ideology.

How will the debate taking place on the political stage affect the national dialogue? Will it serve as a wake-up call to address long-simmering tensions, or further divide the country along racial, ethnic and partisan lines — or both?

The PBS NewsHour asked Americans in person and through social media for their views on how the country should be talking about race during the 2020 presidential campaign.

Are things getting worse and what’s to blame?

In response to NewsHour’s questions over the last week, some Americans, most of whom self-identified as white, said they did not think racism was a major problem.

Others said racial and ethnic divisions are getting worse, and placed the blame on various individuals and groups: Trump for his policies and rhetoric against minorities, Democrats for “crying racism,” and the media for reporting on the controversies in ways that could stir up division.

“Part of the problem is that reporters always report it as a black guy and a white guy. People are people. That’s how I look at it,” said Steve Kruckenberg, a 65-year-old white man from Sheffield, Iowa.

Jennifer Knickerbocker, a 48-year-old Native American woman, said not talking about race will only perpetuate the problems that exist.

“The majority of Americans would like for race not to matter, or for us to be color blind, but race really does matter. We should talk about what we experience as people of color and also the laws that have impacted people for generations,” she said.

While many Americans acknowledge that racial tensions did not start with Trump, a full 56 percent of Americans still think the president has made race relations worse, according to the Pew Research Center. Forty-five percent of Americans think expressing racist views has become more acceptable since Trump was elected. 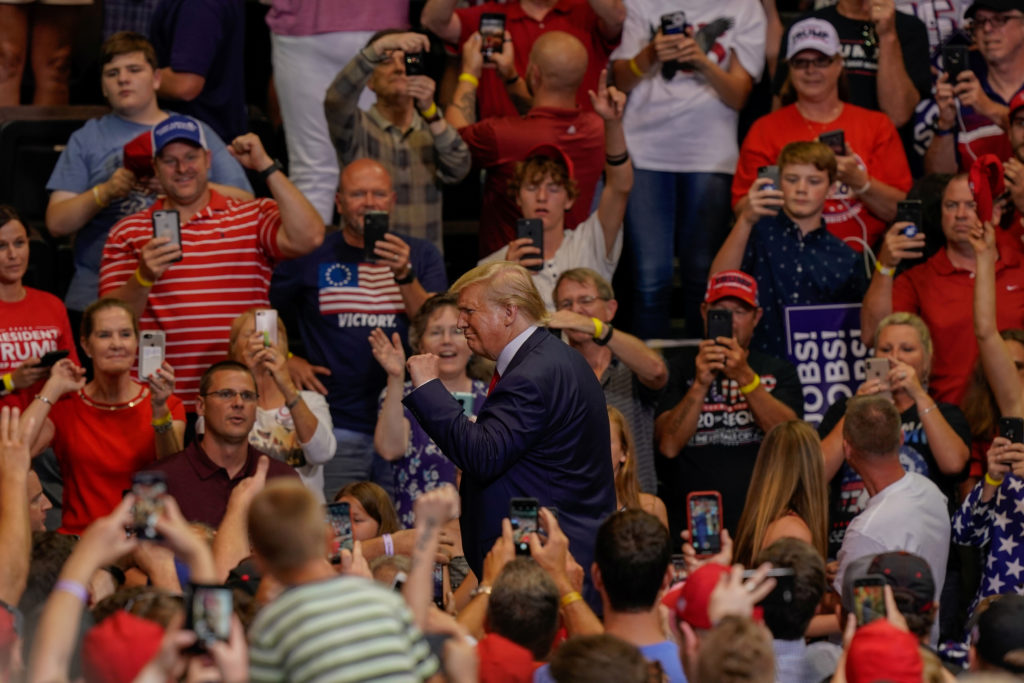 President Donald Trump acknowledges supporters as he departs a campaign rally in Cincinnati, Ohio. on August 1, 2019. Photo by Bryan Woolston/Reuters

Research by Gallup showed a sharp drop in how Americans perceived relations between blacks and whites in 2013, after a spate of black men were killed by police and led to the rise of the Black Lives Matter movement.

Perceptions have recovered slightly, but in 2018, only 51 percent of Americans said relations between black and whites were good, up slightly from 47 percent in 2015.

Views on the relations between Hispanics and whites has remained more consistent over the years, with 62 percent of Americans saying relations are good and 38 percent saying they are bad, according to the 2018 Gallup survey.

However, 47 percent of Hispanics have also said their situation in the U.S. has worsened over the past years, the highest number since the Great Recession, according to Pew.

Like many issues, views on discrimination break down along party lines, and they are becoming more partisan. 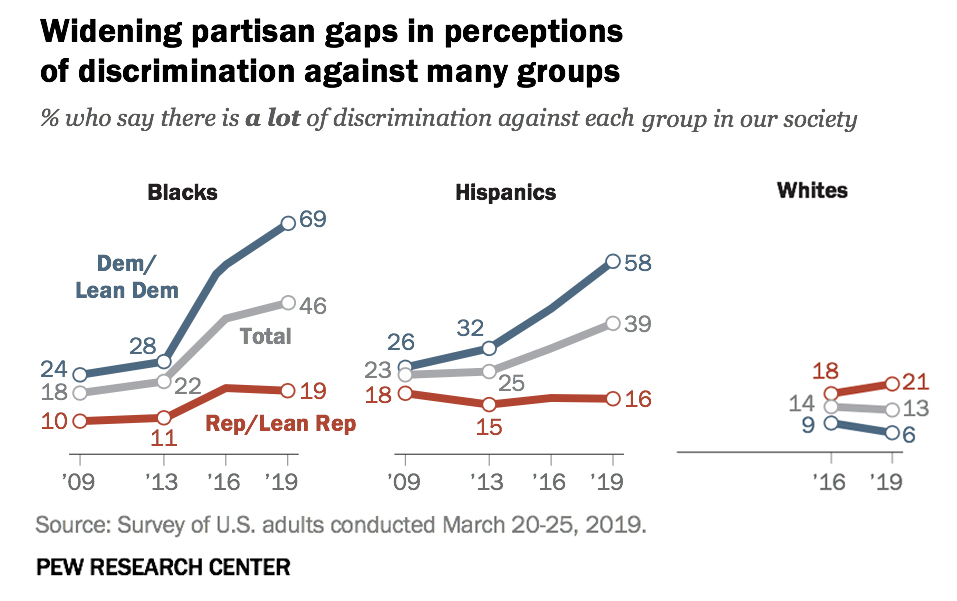 Meanwhile, 21 percent of white Republicans now say whites experience “a lot” of discrimination, compared to only 4 percent of Democrats, according to Pew.

It’s a perception that Trump tapped into during the 2016 campaign when he appealed to many white Americans’ fears that their way of life is being threatened by minorities.

“The current generation of white people have an enormous amount of anxiety for future generations, for ideas around entitlement and privilege,” said Leah Wright Rigueur, an associate professor of public policy at Harvard University.

What can be done to bridge the divide?

In the run-up to the 2020 election, there is no consensus.

Some of the recommendations from advocates and everyday Americans are not new: Acknowledge systemic racism, travel to other parts of the country where people think differently than you, make an effort to live in diverse communities and teach children tolerance.

“You can still have your side. But when it comes to certain things we all got to work together to fix the whole bigger picture. A lot of people don’t see that,” Andre Lee, a gay, black man who recently attended the African American Festival in Baltimore with his white partner, told the NewsHour.

A number of Americans said the key to bridging racial and ethnic divisions is to speak openly and honestly with one another.

“Nobody’s talking to each other. Everyone is talking at each other,” said Norman Neal, an African American from Baltimore.

Liz Matory, a black Republican politician from Maryland, said people need to be willing to take risks and have difficult conversations.

Matory, who wrote a 2016 book called “Born Again Republican” about her political journey, said she has been heavily criticized for switching from the Democratic Party to the Republican Party. “I’ve gotten so much pushback from my friend groups, my alumni. Half my family doesn’t talk to me. I don’t wish that on anybody.”

With tensions high — a deadly El Paso shooting believed motivated by hate still fresh in people’s minds — many advocacy organizations say discussing race with one another is not easy.

“It’s challenging to talk about healing when you are in the midst of being attacked,” said Janet Murguía, CEO of the Latino advocacy organization UnidosUS. 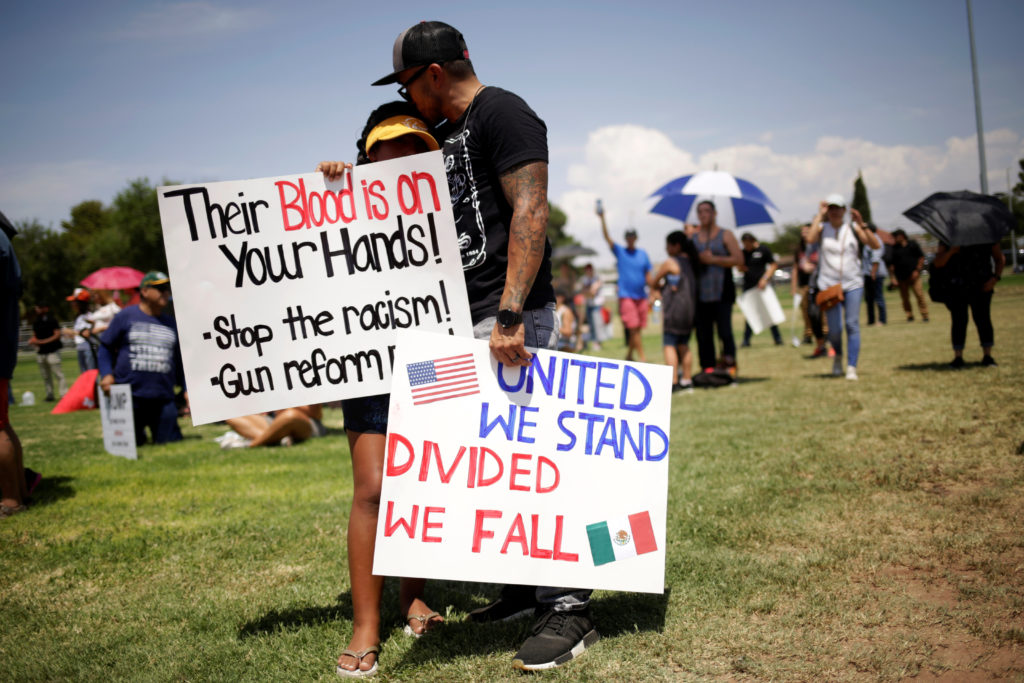 People embrace while holding placards during a rally against the visit of U.S. President Donald Trump after last weekend’s shooting at a Walmart store, in El Paso, Texas, on August 7, 2019. Photo by Jose Luis Gonzalez/Reuters

Grassroots groups across the nation, many headed by minorities, have long been at the forefront of efforts to bridge racial divides, and could provide important guidance for people who want to find a path forward.

“Listening to people of color who really have been in the trenches on this forever and who have ideas and important thoughts and directions is important. It’s part of the process,” Rigueur said.

But many Americans, especially white people, don’t even interact with other racial and ethnic groups on a regular basis.

Riguer suggested a simple way to broaden your views: “Pick up a book and read outside of yourself. Read from the perspective of somebody that is different from you.”

Jenae Addison and Lisa Desjardins contributed to this report.