Illustrating Death: Data from the Gallows to Stampedes

The National Post has death on the brain. The Canadian newspaper posted a pair of beautifully illustrated data stories in July and August.

In ‘A Short History of U.S. Capital Punishment‘ the death penalty is broken down by all its methods, demographics and offenses from 1676 to today. Doing so in such a way reveals little-known facts about the practice. Did you know that at least four people were sentenced to death for childbirth concealment in the United States?

You probably already know that the U.S. ranks high globally for the number of people it executes, but less known is the capital punishment method. In the last 37 years, 152 people have been killed by electrocution, 11 were gassed and three each were hanged or shot, with 1,170 executed by way of the now-standard injection method. In all of U.S. history, 15 were reported gibbeted, hung in a device for public display, and at least one was pressed to death.

‘Death in Transit‘ looks at plane, train, boat and crowd incidents (such as stampedes and natural disasters like tsunamis that affect densely-populated areas) across the globe, starting off with the Titanic in 1912 and continuing timeline-style to the crash of Bhoja Air flight B4-213 in 2012. 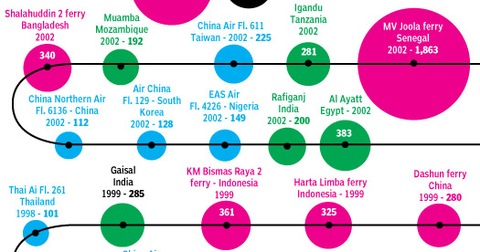 You will recognize “big” disasters that received a lot of media attention, like the 1990 stampede in Mecca, the 2004 Sri Lanka tsunami and the four flights involved in the Sept. 11 attacks, but this graphic includes many lesser-known events. Even a quick glance shows the long history of major transit-related deaths.

It also details road deaths by country per capita and per vehicles. The Nordic countries are the safest to get on a vehicle on the road, while Ethiopia is the most dangerous.