How Clinton won the black vote in South Carolina

COLUMBIA, S.C. — If the Nevada caucus was an initial test of Hillary Clinton’s support among minority voters in diverse states beyond Iowa and New Hampshire, South Carolina represented a major reckoning.

Clinton, who narrowly won the Hispanic vote in Nevada, beat Sen. Bernie Sanders by 84 to 16 percent among African-American voters in South Carolina, according to exit polls. Clinton won the state by nearly 50 points, giving her campaign a boost of momentum heading into the Super Tuesday primaries tomorrow.

Democratic Rep. James Clyburn, a prominent black leader in the state who endorsed Clinton over Sanders, drove the point home at the campaign’s primary night celebration.

After hearing from both candidates, Clyburn said, “the voters of South Carolina have rendered a significant verdict.”

READ MORE: Sanders supporters may soon have to choose between Clinton and Trump

Clyburn’s underlying message was clear. In a primary where African-Americans comprised 61 percent of the Democratic electorate, Clinton established herself as the preferred candidate of non-white voters.

All signs pointed to Clinton beating Sanders in South Carolina. The former secretary of state held a consistent, double-digit lead in the polls in the weeks before the primary. But the level of support she received from black voters came as a surprise, even to Clinton campaign officials.

The spectacle of Democrats descending on states like South Carolina every four years to “court” the black vote has become a routine part of the primary process.

“It was higher than what we expected,” a top adviser said.

The victory here was an important step forward for Clinton, who lost the state to Barack Obama in the 2008 primaries; that year Clinton drew just 19 percent of the black vote, and her campaign never fully recovered. Clinton’s landslide win also dealt a blow to Sanders, who had hoped for a closer second-place finish.

But beyond the immediate implications for the primary fight ahead, the contest also revealed key differences in Clinton’s and Sanders’ approach to the African-American community.

It also highlighted the persistent challenges that white Democratic candidates face in addressing issues of race in the South, despite the overwhelming loyalty that most black voters show to the party.

“Democratic candidates are always walking a fine line. When do you focus on race explicitly, and when do you focus on broader issues that affect” the party’s entire base, said Danielle Vinson, a political science professor at Furman University in Greenville.

“It is a challenge, and a lot of times it leaves voters and their coalitions unhappy” if candidates don’t get it right, Vinson said.

The spectacle of Democrats descending on states like South Carolina every four years to “court” the black vote has become a routine part of the primary process.

But the highly public courtship involves a more complicated set of calculations on both sides than is typically acknowledged in campaign narratives about racial politics in the South, which often oversimplify the motivations of voters and candidates alike.

“There isn’t simply blind support among African-Americans for Democrats,” said Bruce Ransom, a political science professor at Clemson University who studies politics in South Carolina. “Black voters examine the two parties, but they usually conclude that under Democrats they get better results,” said Ransom, who is black.

A similar calculus took place in choosing between Sanders and Clinton. In interviews in the final days before the primary, black voters around the state said they based their decision on several factors: which candidate did the best job of connecting with, and listening to, their concerns on a wide range of issues; which candidate had the most realistic agenda; and who was more likely to win in the general election.

An assessment of Clinton and Sanders’ support for Obama in general, and the Affordable Care Act in particular, also factored heavily into the decision-making process, many black voters said.

“Clinton is positioning herself to carry on the efforts of President Obama,” Cassandra Williams Rush, 66, said on the eve of the primary. “I just don’t get the right vibes from Sanders.”

Rush, a retired engineer and Clinton backer, spent her early childhood on her family’s 10-acre farm in Nesmith, on the eastern edge of Williamsburg County. Rush lived with her six siblings and parents in a small house with a wood stove and no indoor toilet until the family moved to a larger home in Kingstree, the county seat. 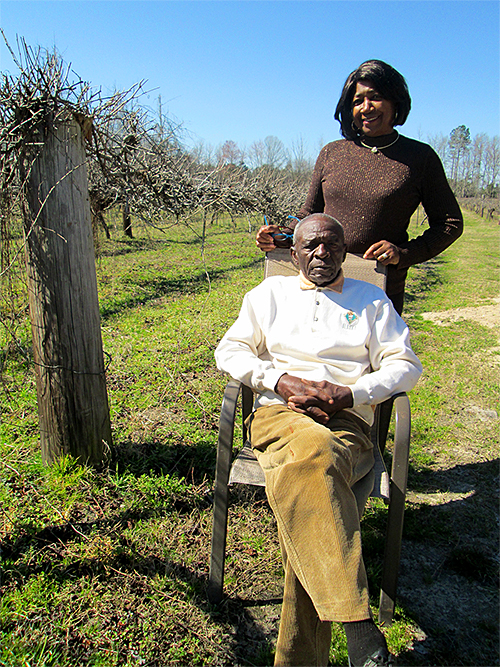 David Williams and Cassandra Rush on their family farm. Photo by Daniel Bush

After retiring, Rush has divided her time between her home in Columbia, the state capitol, and Williamsburg County, which has the second-highest black population by county in the state, according to census data. It’s also the county where Obama recorded his largest margin of victory in the 2008 primary.

In 2010, Rush, who is documenting the county’s history, opened a small museum and gallery dedicated to African-American art in a former laundromat in Kingstree. She also manages the family farm, which has been repurposed as a vineyard and community event space.

By now, Rush said, she has become accustomed to seeing Democratic presidential candidates canvass the state in search of support from black voters.

Both Clinton and Sanders are “trying to tap into things that they know are dear to our hearts,” Rush said in an interview on the farm on primary day. “As a black person, you’re hoping and wishing that they’re 100 percent genuine in their efforts.”

In an appearance in Kingstree ahead of the primary, Clinton’s voice took on a slight twang as she addressed a crowd of several hundred supporters gathered at a recreational center.

“I’m proud of President Obama, and I’m proud of the progress he’s made,” Clinton said, making sure to highlight his healthcare law. “I don’t think the president gets the credit he deserves.”

The line, which is a part of Clinton’s regular stump speech, got the biggest round of applause of at the event, along with her call for congressional Republicans to hold hearings on Obama’s pick to replace Supreme Court Justice Antonin Scalia.

Clinton’s embrace of Obamacare stood in marked contrast to Sanders, who has been far more critical of the president’s signature domestic policy achievement.

“The Affordable Care Act is a big deal in the state of South Carolina,” said Caroletta Shuler Ivey, who teaches courses on criminal justice and constitutional law at Claflin University, a historically black university in Orangeburg. “Clinton recognizes that.”

Rush’s 88-year-old father, David Williams, attended Clinton’s event in Kingstree. Williams, who was the first black man in his community to graduate from a four-year college, cited her support for the president and Obamacare as one of his main reasons for backing her. Williams said he considered the law a milestone, in line with other major markers of progress in his lifetime like the Voting Rights Act.

“Republicans tried everything in the books to make him fail,” Williams said of Obama. “In their world he’s the worst. In my world, he’s the best.”

Williams’ pride in Obama was common among black voters across the state. And surveys show that public opinion on the president is sharply divided along political and racial lines. In a Gallup poll earlier this month, 94 percent of African-Americans said that they approved of Obama’s job performance, compared to just 42 percent of whites.

But black Clinton supporters in South Carolina were quick to point out that her embrace of the president and his policies wasn’t the only reason why they chose her over Sanders.

Regina McKnight said she believed that Clinton’s proposals to create jobs and lower the costs of education were more realistic than Sanders’ agenda, a commonly-held view among older black voters that the Sanders campaign disputes.

“She’s telling the truth,” said McKnight, a retired Williamsburg County administrator. “You cannot have free college tuition for everyone. That’s just not possible.”

Peter LaBerge, who served as a community field director for the Sanders campaign in Aiken County, defended Sanders in an interview at a campaign event at Claflin University on the eve of the primary.

Sanders has spent decades “working on racial justice and social justice,” LaBerge said. “His approach with minorities has been very effective.”

“As a black person, you’re hoping and wishing that they’re 100 percent genuine in their efforts.”

The rally featured a speech from the rapper Killer Mike, an effective Sanders surrogate who has criticized Bill and Hillary Clinton’s record on race and criminal justice. The critique has resonated with Sanders supporters, especially young voters.

The 1994 crime bill “is responsible for the incarceration of so many African-Americans,” said Derrick Quarles, who graduated from Claflin in 2013. “I can’t get over that.”

But older black voters appeared more willing to look past the Clinton administration. Exit polls in South Carolina show that Clinton won at least 75 percent of the vote among people of all races age 30 or older.

As primary day approached last week, Clinton focused on her criminal justice reform and gun control plans at campaign stops throughout the state, leading to a flurry of attacks from critics who said that she was pandering to black voters in order to thwart a late surge by Sanders.

Sanders was also heavily criticized by Clinton supporters who questioned his commitment to the civil rights movement at the start of his political career.

The heated exchange on both sides pointed to the delicate balance that white Democrats must strike when appealing to black voters in the South, said Todd Shaw, a political science professor at the University of South Carolina.

But labeling Sanders and Clinton as pure opportunists ignores the realities of electoral politics, Shaw argued. Politicians are often personally invested in issues that seem to be driven by anger from voters or party activists.

“I don’t doubt that there’s a level of sincerity” in Clinton and Sanders’ campaign rhetoric, Shaw said, even if it can sometimes come off as overly strategic.

In South Carolina, Democrats have to navigate “a combination of political self-interest and good electoral messaging to direct policy statements and signals to the African-American community. It would be silly not to.”

Clinton alluded to that fact in her victory night speech. As she looked ahead to Super Tuesday, and took a veiled swipe at the Republican front-runner Donald Trump, Clinton paused to reflect on her resounding win in South Carolina.

Voters “sent a message,” Clinton said. Moving forward, “we are going to compete for every vote in every state. We are not taking anything, and we’re not taking anyone, for granted.”

Left: The level of support that Hillary Clinton received from black voters in the South Carolina primary on Saturday came as a surprise, even to her campaign officials. Photo by Randall Hill/Reuters