How Did Watergate Affect You?

“Covering Watergate,” a PBS NewsHour special report, will air May 17.

Forty years ago, in the summer of 1973, Robert MacNeil and Jim Lehrer led public broadcasting’s gavel-to-gavel coverage of the Senate Watergate hearings — co-anchoring all 250 hours of the proceedings, and launching the beginnings of what the PBS NewsHour is today.

On May 17, PBS NewsHour presents a special report looking back at the scandal that transformed American politics and journalism and ultimately ended a presidency. In it, MacNeil and Lehrer recount their memories after some of the more gripping moments in the hearings and explain how their partnership and expansive coverage changed not only the face of television journalism, but also their lives.

As we ready this retrospective, we want to hear from you — our viewers, those of you who spent the summer of ’73 watching John Dean and Alexander Butterfield testify, or even those of you who learned of Watergate’s impact much later.

How did the Watergate scandal and hearings affect your life or the way you perceived government or the media? And, what do you think Watergate’s effect was on the nation?

We’ll showcase some of your stories here on our website when the special airs on the broadcast May 17 and we revisit a scandal and process that captured the country four decades ago. 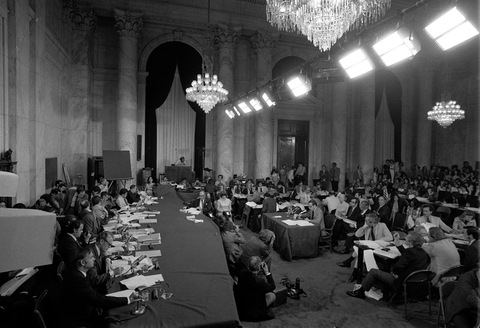 May 17, 1973 marked the start of the Senate hearings that would eventually lead to President Nixon’s resignation.

The PBS NewsHour is marking the 40th anniversary of the Watergate hearings with reflections from Robert MacNeil and Jim Lehrer, who covered the hearings gavel-to-gavel. Watch their conversation with senior correspondent Jeffrey Brown on the NewsHour May 17, 2013.