Kentucky Dispatch: How Do You Know It’s Election Season? Turn On the TV 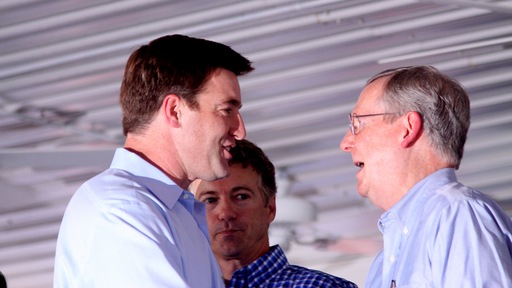 LOUISVILLE, Ky. | Election Day is less than four weeks away, a fact that becomes plainly obvious simply by turning on the television in any state with a competitive Senate race. It’s nearly impossible to go an entire commercial break in Kentucky without seeing an advertisement from Republican candidate Rand Paul or his Democratic opponent, Jack Conway.

First, there is Paul, speaking directly into the camera, hammering home his anti-Washington message. “Expand our liberty by downsizing big government.”

Then, in the blink of an eye, another spot begins, and it seems at first to be another Paul ad, this time targeting Conway. “There’s no sense to Jack Conway’s liberal agenda. Jack Conway’s the wrong way for Kentucky,” says the faceless narrator.

Unless you’re a Kentucky voter with impeccable eyesight, or listening with such rapt attention that you somehow catch the last sentence of the script, you probably missed that the ad is not a product of Paul’s campaign, but rather a group called American Crossroads.

The political organization and its nonprofit affiliate, Crossroads GPS, were co-founded by former George W. Bush adviser Karl Rove and former Republican National Committee Chairman Ed Gillespie. Together, the groups have capitalized on the loosening of campaign finance laws to dole out some $14 million in media buys this fall.

That figure includes a new $4.25 million advertising blitz in eight states, with $310,000 marked for Kentucky. American Crossroads has already pumped more than $475,000 into the Kentucky contest, hitting Conway for his support of the health care bill and stimulus plan.

Conway has looked to shine a spotlight on the issue by criticizing outside groups for involving themselves in Kentucky’s business.

“You’re seeing all the ads, you’re seeing that we’re getting outspent on TV right now by a lot of these special interest groups bringing in money from outside Kentucky to try and distort the views of the people of Kentucky,” Conway told supporters at a recent campaign stop in Louisville.

But Conway is set to get some outside help of his own, from the Democratic Senatorial Campaign Committee, which released an ad Tuesday that labels Paul as out-of-touch with Kentucky voters. It plays up the fact that Paul is not a native Kentuckian and highlights a comment Paul made last year raising the idea of a $2,000 Medicare deductible.

Conway told the PBS NewsHour’s Gwen Ifill in an interview Sunday that he welcomed the help. He recounted a recent conversation he’d had recently with Sen. Robert Menendez, D-N.J., where he said he told the head of the DSCC, “Come on in, the water is fine.”