How Important is the Gay and Lesbian Vote for the Upcoming Election? 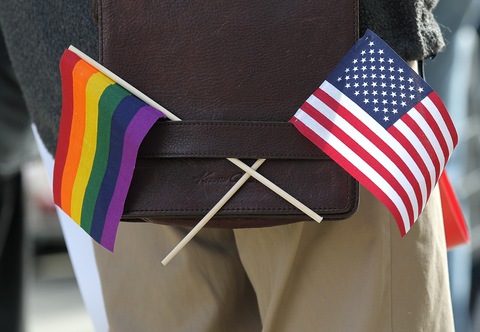 A gay pride and an American flag hang from a shoulder bag during a demonstration outside of the Phillip Burton Federal Building in 2011 in San Francisco, Cal. Photo by Justin Sullivan/ Getty Images.

“This didn’t happen in Nashville.”

That’s what I told our cameraman last month when he filmed the gay pride flag-raising ceremony at San Francisco City Hall. We were producing a PBS NewsHour segment on the political reaction to President Obama’s decision to endorse same-sex marriage.

I used to cover politics in Nashville, and I consider Music City a liberal, generally open-minded Southern town. But gay political activism was rarely in the news there, and I can’t imagine any mayor in any Tennessee city raising a Pride flag over town hall; Nashville, despite its progressivism, is still in the Bible Belt (the main gay strip in Nashville is on Church Street). There would likely be immediate protests from religious and conservative groups.

I’ve been in the Bay Area less than a year, so the uneventful flag-raising in San Francisco was a new experience for me. But every June here, the mayor and most other local political heavyweights attend the annual Alice Pride Breakfast, helping raise money for one of the city’s two major LGBT (lesbian, gay, bisexual and transgender) Democratic political clubs. And several key California Obama campaigners attended this year’s breakfast.

But is the gay political scene in San Francisco still an exception, and will the gay vote in America really matter in the presidential election? The Obama campaign seems to think so: there’s an “Obama Pride” website devoted to the LGBT community; first lady Michelle Obama recently held a conference call with gay activists encouraging them to hold “Pride” house parties; the campaign has a staff dedicated to getting out the LGBT vote; and the campaign is raising funds from this community.

It’s estimated that only about 4 percent of the American population identifies as LGBT, and in national elections they usually vote Democratic. So I asked Patrick Egan, a professor of political science at New York University, and Kenneth Sherrill, a professor of political science at Hunter College at the City University of New York: Does the gay vote really matter? Can the Democrats not take the LGBT vote for granted? And why does the Obama campaign find it important to reach out so meaningfully to the gay community this year?

In 2008, Egan and Sherrill co-authored a paper on LGBT civic engagement, finding that gays and lesbians tend to be more active civically and politically than other Americans. Sherrill says this matters in states like North Carolina and Virginia, where Obama won narrowly in 2008.

Egan, however, cautioned that the LGBT population is still just a small percentage of the American whole and said he didn’t think the gay vote is “more important this election” than it’s been in the past. The Obama effort to attract the LGBT vote, Egan said, is “a reflection of both campaigns trying to eke out any advantage they can from any voting blocks in the electorate. If the Democrats can get gay people to vote on the basis of which party is offering more policies that promote gay rights, the choice is quite clear.”

Thanks to new marketing technologies, Egan said both parties, Republican and Democratic, are more often targeting segments of the population with tailored campaign messages: “Republicans do that with evangelical Christians, and Democrats do that with gay voters and other constituent groups.” Another reason might be that with tiny electoral margins, any advantage could win an election.

And according to Sherrill, the gay community may be particularly motivated to vote this fall: “Nobody else has the right to get married on the ballot.”

Gary Gates, a professor at the Williams Institute at the UCLA School of Law — which focuses on sexual orientation and gender identity law and public policy — said that politicos may have decided that gay issues have become significant enough for the general population that political campaigns feel they are worth fighting for.

“Is the calculus now that the scale has tipped such that coming out in support of LGBT issues isn’t just about attracting the LGBT vote — is that a way to also peel off some of the women’s vote, to attract some segment of independents? I could very well see that the calculus [has changed],” Gates said. Regarding the influence of gay political donors and activists: they aren’t necessarily richer than their straight counterparts, but because they aren’t as likely to have children, they may be more able to donate time and money to political campaigns, said Gates.

There’s still some hesitancy to talk — the Obama campaign didn’t want to talk to me about its big-dollar LGBT fundraising efforts — but it looks like LGBT politics may be spreading more and more from San Francisco and New York into the heartland.

William Harless, a native of North Carolina, is a summer intern in the San Francisco office of the PBS NewsHour and is a journalism student at the University of California at Berkeley