Wrath of the talking heads: How the ‘Outrage Industry’ affects politics

Flipping through channels, it’s easy to catch a reality show promotion that includes some kind of fight. The more negative emotion on TV, the better for ratings. But wrath isn’t just popping up in entertainment — it’s proven successful on political opinion shows, where correspondents use their personalities to degrade others and promote a highly politicized brand.

In their new book, “The Outrage Industry: Public Opinion Media and the New Incivility,” Tufts University professors Sarah Sobieraj and Jeffrey M. Berry examine the rise of incendiary rhetoric and indignation in political commentary and how it’s become our new normal.

PBS NewsHour spoke with co-author Sarah Sobieraj about their research. This conversation has been edited for length.

NEWSHOUR: What exactly is “outrage” in political opinion media?

SARAH SOBIERAJ: Outrage is a concept we developed to describe political speech and behavior involving efforts to provoke emotional responses — especially anger, fear and moral indignation — from the audience through the use of categorical statements, misleading or inaccurate information, ad hominem attacks and partial truths about opponents. It is a form of political communication that glosses over the messy nuances of complex political issues and instead focuses on melodrama, mockery and forecasts of impending doom. 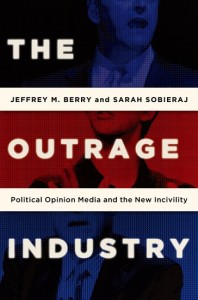 What’s more, this unique brand of incivility has become the mainstay of an entire genre of political opinion media that is not really about dialogue or information, but instead takes the form of a wildly entertaining verbal jousting match, with the victor of the day being the team that most effectively paints the other side as dangerous, misguided or inept.

In your research, how frequently did you observe “outrage” and to what extent was it considered strongly conservative or liberal?

Well, our first reaction was amazement, to be completely honest. We knew there would be quite a bit of outrage, but it was rampant. (The worst offenders) were using outrage speech and behavior at a rate of more than one instance per minute …. There are more programs on the right that are outrage-based than there are on the left — talk radio, for example, is over 90 percent conservative — and if you look at the average number of outrage incidents per episode, there are more instances in shows hosted by conservatives than liberals. Having said that, the left is very nasty too. There are no innocents here. What’s more, the techniques used by the left and right are actually quite similar.

How did we arrive at this point?

It’s increased dramatically since the early ‘90s. There has always been outrageous political speech in the media, but it was uncommon. Father Coughlin was noteworthy for his venom, but he was an exception. Over the last 25 to 30 years, an entire genre grounded in outrage-based content has developed. We argue that this increase isn’t a simple reflection of an increase in political polarization on the part of audience, but instead reflects of a set of technological, regulatory and political changes that have rendered this type of content profitable in a way that would have been unheard of in the ’70s. There are certainly fans, but the real driving force is profitability.

Take a look at any of these media: television, radio, or the web, and in all cases we see that the audience has fragmented into tiny slivers …. As a result, we have a remarkably cluttered media landscape. If you are producing content, you need to break through that clutter somehow. If you’re in scripted television, perhaps you use sex and violence. You use edgy humor. In political opinion media, the equivalent is carefully negotiated shock and agent provocateurs. That steady stream of “pop” combined with very low production costs relative to other kinds of programming, and certainly relative to something like traditional journalism, makes this a winning recipe.

How do you think the prevalence of all this outrage shapes our lives?

The driving narrative in these shows is that there are good guys and bad guys. It’s not that hosts simply disagree with their opponents’ policies, their opponents are bad people. They’re portrayed as inept, manipulative, dangerous. At the personal level, we suspect that these caricatures have the potential to create a barrier between people, to make us less open to hearing the political ideas of others. If you accept the narratives offered by Lawrence O’Donnell and Rush Limbaugh, you are bound to be more suspicious of others and less tolerant of differing views. Furthermore, it exacerbates our discomfort with discussing politics, and that’s a cornerstone of democracy.

Has political opinion media had a real effect on politics?

I think the impact has been heaviest on the right, because the conservative side of the industry is so much more robust than the liberal side. One thing we note is the steady drumbeat that stigmatizes congressional collaboration and compromise. Every vote is interpreted as a litmus test of ideological purity, which can be really detrimental to the legislative process.

One example is the government shutdown. As a whole, the government shutdown reflected badly on Republicans — they took a hit in the polls, but if you look at each Republican legislator, the votes make sense because they didn’t want their feet held to the flames. Immigration reform, which seems essential to the party’s future, was voted down in the House because the “outrage industry” went on a tirade against it. Limbaugh criticizes RINOs — Republicans In Name Only — and no one wants to be targeted with that criticism.

And it isn’t just sticks and stones. Fans of these programs have high levels of political involvement and as we have seen, Republicans that fail the litmus test run the risk of getting “primaried” right out of their districts. Some feel the only way to protect themselves is to be as far right as possible, so there is no room for someone to run at them from the farthest end of ideological spectrum. Thus, even though the country gives low marks to the Congress for gridlock, it is the fear of retribution from cable, talk radio and political blogs, and then eventually from their constituents, that actually makes it rational for legislators to favor gridlock.

Many people love watching Bill O’Reilly and Rachel Maddow; what would you want those viewers to consider?

Oh, they are incredibly charismatic and entertaining. There is a lot to enjoy in outrage-based content. But it’s important to consume critically, even when you are listening to people you agree with and respect. Outrage-based opinion hosts are not charged with providing the news of the day. What they do is respond, selectively. They engage with the news of the day that sets them up most effectively for a zinger. They omit news that doesn’t spin well for the home team, and often over emphasize things that are brand-friendly, but not of much importance. The result is a funhouse mirror version of the day’s events. Some fans believe these shows are the only sources they can trust for information. That’s a pretty impressive feat, really, to have convinced someone that an opinion program offers the truth, while conventional news is riddled with bias. Having said that, I don’t think it’s bad to enjoy these shows, it is just important to understand how they work and consume a broader curriculum of information.