How the attack on the U.S. Capitol unfolded

At first the commotion outside the Senate chamber sounded like a routine disturbance to the members inside, the kind of small-scale protest that often takes place at the Capitol.

Then a Senate aide burst through a door into the chamber.

As senators seated at their desks watched with surprise, the aide raced down an aisle towards the dais, where Vice President Mike Pence was presiding over objections to Congress accepting President-elect Joe Biden’s Electoral College victory. In a matter of moments, the vice president gaveled a recess and was whisked away.

“That’s when we knew it was a very different situation,” Sen. Jeff Merkeley, D-Ore., said in an interview late Wednesday night.

Across the Capitol Building, House lawmakers were in the midst of their floor debate when they first heard reports that the Cannon House Office Building was being evacuated. Then news began spreading of Pence’s evacuation. Shortly after House Speaker Nancy Pelosi was ushered out of the chamber.

Soon the House chamber was on lockdown as United States Capitol Police officers with guns drawn faced off against a violent mob intent on breaking in.

“I could hear them banging on the doors,” Rep. Mark DeSaulnier, D-Calif., told the PBS NewsHour’s Judy Woodruff. “It was a surreal experience.”

The deadly clash that unfolded Wednesday was one of the largest security breaches of the United States Capitol in the nation’s history. The assault raised questions about the security of the Capitol Building, as well as the disparate police treatment of white and non-white protesters.

It started as an attempt by an angry mob of President Donald Trump’s supporters to stop the Electoral College vote count. It ended, many chaotic hours later, with Congress completing its count after several Republicans dropped their plans to object, a rare statement from Trump in which he came as close as he has yet to conceding he lost, the resignation of senior administration officials in protest over the violence at the Capitol, and calls from Democrats and at least one Republican to have Trump removed from office. 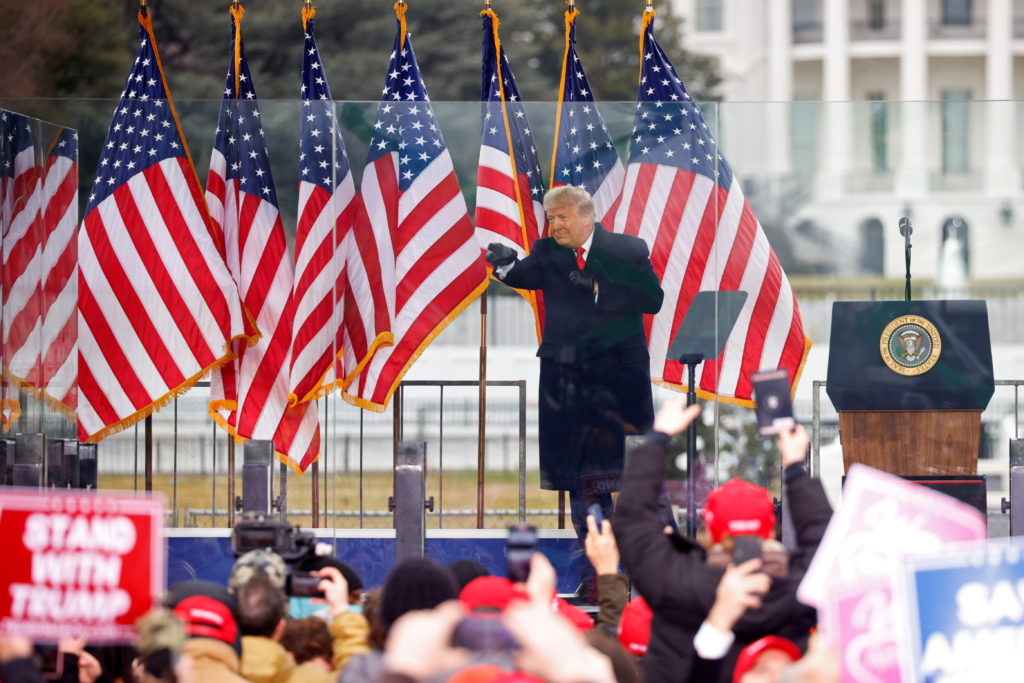 President Donald Trump gestures at the end of his speech during a rally to contest the certification of the presidential election results by the U.S. Congress, in Washington on January 6, 2021. REUTERS/Jim Bourg

Wednesday’s historic sequence of events began with a late-morning rally by a defiant president fixated on his failure to win reelection.

Trump spent the more than hour-long speech at the Ellipse near the White House repeating his false claims that the election was stolen from him through voter fraud. He called on Pence to reject the Electoral College votes from a handful of battleground states, power the vice president does not have, ratcheting up pressure on one of his most loyal aides to stick by his side in a last-ditch attempt to defy Congress and the Constitution.

Even as Trump spoke, Pence had arrived at the Capitol with a letter in which he acknowledged he lacked “unilateral authority to determine which electoral votes should be counted and which should not.”

Still, Trump urged Pence to “come through for us,” and said supporters would “walk down to the Capitol” to protest against Republicans who refused to back his effort to overturn the election. The president’s son Donald Trump Jr. was more blunt in a speech before Trump took the stage.
“We’re coming for you,” he said.

After the president concluded his remarks, a large crowd waving Trump flags began gathering at the Capitol West Front. Clashes soon broke out with Capitol Police, and rioters succeeded in breaking through police barricades guarding entrances on the east side of the building.

With the perimeter breached, the mob streamed up the steps on the House and Senate sides of the Capitol and broke into the building. What followed was mayhem on a level not seen inside the Capitol in more than two hundred years.

Rioters placed Trump flags in the National Statuary Hall. They ransacked lawmakers’ offices. Photos went viral of a protester with his feet up on a desk in Pelosi’s office suite, and others waving Confederate flags.

READ MORE: Trump says there will be an ‘orderly transition’ of power, acknowledges defeat

One of the most dramatic standoffs took place outside of the House chamber. As rioters banged on the doors to get in, Capitol Police issued instructions to House lawmakers to shelter in place as they scrambled to find a safe way to get them out of the chamber.

“We were being told by the Capitol Police to get down in the event that there was an active shooter,” Rep. Mikie Sherrill, D-N.J., told the NewsHour, “and to pull out our gas masks in case there was tear gas that they had to use to disperse” the crowd.

For several tense minutes House lawmakers crouched on the ground, waiting for a signal from police to evacuate. “I was with some [House] members that were calling their families, and so then I called my husband to assure him I was Ok,” Sherrill said. 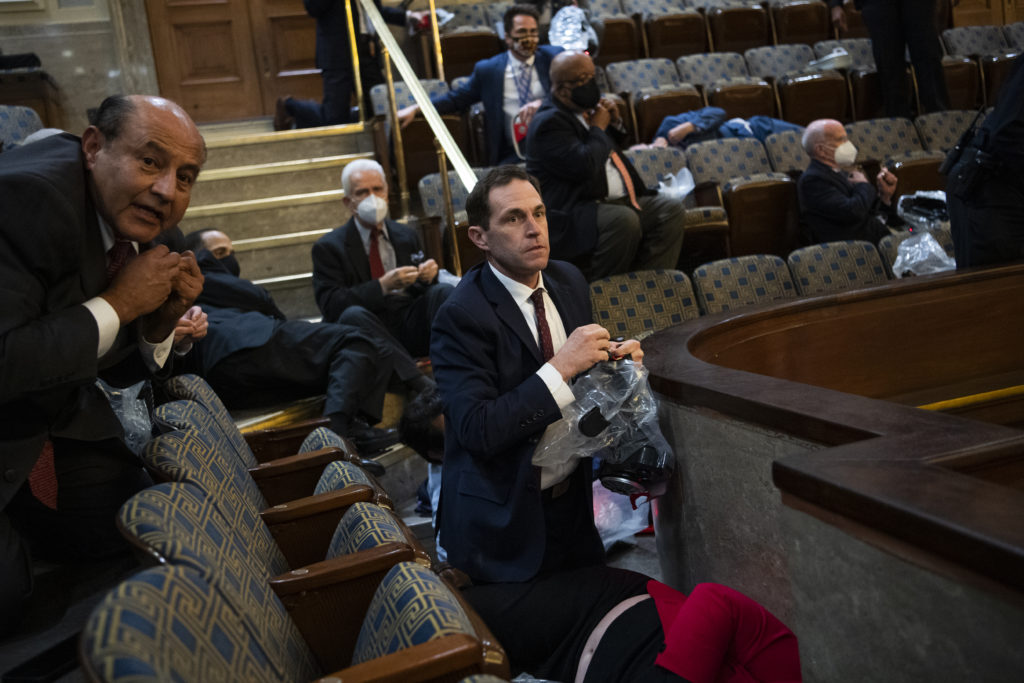 Eventually Capitol Police escorted lawmakers out and down a series of staircases to secure locations where they waited for the mob to be quelled.

On the Senate side, most members were sequestered together in a secure room. In the confusion while they were being evacuated from the chamber, some senators did not make it to the secure room and dispersed to other parts of the Capitol complex, leaving Senate staff to search for them to ensure every member was safe and accounted for.

Inside the room where they were being held, a debate erupted among Senate Republicans about how to proceed.

“The Republican senators were debating among themselves when we were in the secure facility as to whether or not they should continue making objections” to the Electoral College vote, said Merkeley.

By that point in the afternoon, it was becoming clear the situation had spiraled out of control and that the assault on the Capitol had overshadowed the Electoral College vote count.

Through the late afternoon, a large crowd of Trump supporters remained lodged outside of the Capitol. Rioters attacked crews of journalists who were covering the events. Law enforcement authorities discovered suspected explosive devices outside of the offices of both the Democratic National Committee and the Republican National Committee, which are headquartered a few blocks away.

Police fatally shot a rioter inside the Capitol. The victim was later identified as Ashli Babbitt, a 35-year-old Air Force veteran with a history of social media posts supporting Trump’s claims that the election was rigged. Three other people died during the insurrection.

The national guards for Virginia, Maryland and the District of Columbia were deployed to the Capitol. At approximately 4 p.m., Biden delivered a brief speech from Wilmington, Delaware, condemning the attack.

“This is not dissent, it’s disorder. It’s chaos. It borders on sedition, and it must end now. I call on this mob to pull back and allow the work of democracy to go forward,” Biden said. He also called on Trump to go on national television and “demand an end to this siege.” 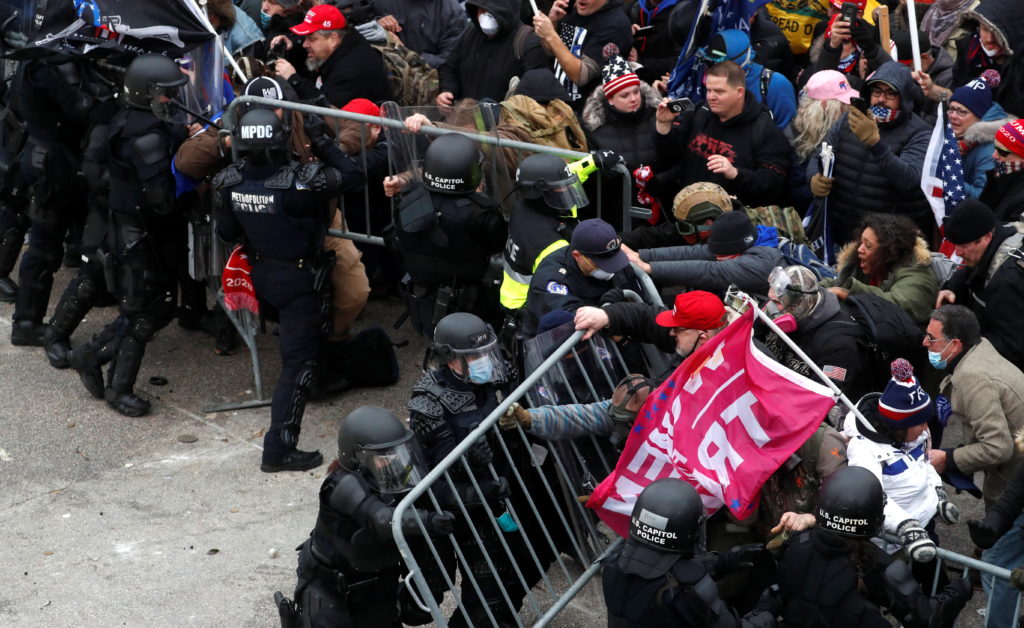 Pro-Trump protesters attempt to tear down a police barricade during a rally to contest the certification of the 2020 presidential election results by Congress, at the U.S. Capitol Building in Washington on January 6, 2021. REUTERS/Shannon Stapleton

Trump released a short video from the White House soon after Biden’s speech. But instead of unequivocally condemning the riot, the president offered a mixed message in which he expressed support for his followers.

“I know your pain, I know you’re hurt. We had an election that was stolen from us. It was a landslide election and everyone knows it, especially the other side. But you have to go home now. We have to have peace,” Trump said.

The message was dismissed by Democrats, and even appeared to fall short among Trump’s allies in Congress.

Two hours later, as police worked to secure the Capitol so that Congress could continue the Electoral College vote count, Rep. Cathy McMorris Rodgers, R-Wash., issued a statement saying that she would abandon her plan to object to the count.

Other Republicans soon followed suit. A few minutes before 9 p.m., Republican Sens. James Lankford of Oklahoma and Steve Daines of Montana issued a joint statement announcing they would also drop their objections in response to the violence at the Capitol.

“We now need the entire Congress to come together and vote to certify the election results,” they said.

The tide had turned against pro-Trump Republicans in Congress, and against the president. After a debate that stretched into early Thursday morning, Congress approved the Electoral College vote for Biden at 3:40 a.m.

In a statement early Thursday, Trump said, “Even though I totally disagree with the outcome of the election, and the facts bear me out, nevertheless there will be an orderly transition on January 20th.”

Even before the voting ended, a debate was already underway about why the police did not do more to stop an overwhelmingly white mob with ties to white supremacist groups from breaching the Capitol.

“I think there’s going to be an awful lot of investigation in terms of what broke down here,” Joe Crowley, a former senior House Democrat, said in an interview.

By Wednesday, Sen. Minority Leader Chuck Schumer, Pelosi and other Democrats called for Trump to leave office immediately. As they reflected on the ordeal, lawmakers said they still could not believe what had happened.

“This is the scariest time in my lifetime for American democracy,” DeSaulnier said.